Wimbledon 2014: Eugenie Bouchard and Petra Kvitova are among the women to reach the quarter-finals on Monday 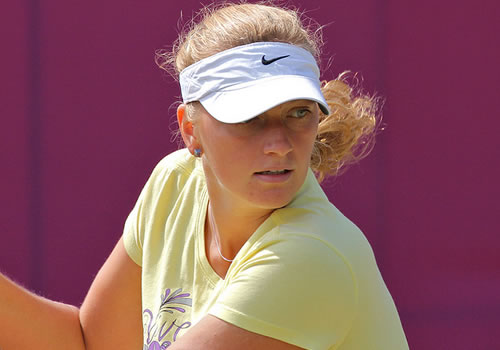 Already, the women’s draw at this year’s Wimbledon has opened up like a flower in the sun that broke out over the All England Club at the start of the second week of The Championships.

For the second consecutive Grand Slam, the top two women in tennis, Serena Williams and Li Na, lost early, just as they had done a month back at the French Open.

For both winners, it was a momentous achievement. Cornet became the first player since Nadia Petrova in 2009 to win back-to-back meetings against Williams: she had previously never defeated a top-20 player in a Grand Slam. And it took the French woman to just her second Grand Slam fourth round in 34 appearances.

For the No43-ranked Czech, whose career in doubles has hugely outshone the one in singles, with 17 titles to just one, this marked her first ever Grand Slam fourth round in 32 Major appearances.

Just as impressive in terms of her nationality, Zahlavova Stycova was one of four women from the Czech Republic in the fourth round—a first in Grand Slam Open history for her, Petra Kvitova, Lucie Safarova and Tereza Smitkova.

What’s more, she took one big step further, beating the former world No1, Caroline Wozniacki, 6-2, 7-5. She would now meet No6 seed and compatriot Kvitova, who showed such outstanding form in beating Venus Williams.

And Kvitova was clearly favoured to reach the quarters, since she faced the unseeded 28-year-old Shuai Peng who was bidding for her first Grand Slam quarter-final at her 36th attempt.

Again, Kvitova was outstanding, taking the win in a scant hour, 6-3, 6-2, with 25 winners to just seven errors.

It ensured three of the four quarter-finalists in the bottom half were Czechs, for the other match in this half threw together No23 seed Safarova against the No175 ranked 19-year-old qualifier Smitkova. The teenager was bidding to become the lowest ranked quarter-finalist at Wimbledon in the Open era, but Safarova allowed her only two games in their 48 minutes.

The loss of Williams and Li, of course, catapulted the Nos 3 and 4 seeds into a possible collision course for the title, Simona Halep against Agnieszka Radwanska.

Radwanska, at No4, was now the top seed in the bottom half, at the Major that has brought her closest to a title. She was a finalist here in 2012, taking a set off Williams, rising to No2 in the world as a result. She also reached the semis last year and the quarters on two further occasions. But she had difficult hurdles before she could contemplate similar runs.

She faced the No22 seed Ekaterina Makarova, who beat her in their last match at the US Open in 2013. Indeed the big-hitting Russian had three previous Grand Slam quarter-finals to her name and was the only remaining woman in the bottom half of the draw to have a WTA title in 2014.

And the Russian, after a slow start, cut through the popular Pole like a hot knife through butter. She took the first set with two breaks of serve, 6-3, and was on the verge of victory after 46 minutes when rain halted play at 5-0 in the second set. Makarova, much as Kvitova, had hammered in 22 winners to only five errors.

But what of the top half, the one now headed by Halep? Well Williams may have gone, but this was still an in-form section.

Halep herself has been in buoyant form, shooting up the rankings between the start of the grass season in 2013 and her first Major final at Roland Garros last month, picking up seven titles on the way. However, she would not know her destiny on second Monday since hers was one of the two fourth-round matches to be scheduled for Tuesday.

But Halep was one of four women into their third Grand Slam fourth-round of the year, and the others were all in this half: No9 Angelique Kerber, No5 Maria Sharapova and No13 Eugenie Bouchard. And that was not the end of it.

Halep may have reached her first Grand Slam final at Roland Garros, but it was Sharapova who beat her there. And the Russian Wimbledon champion of 10 years ago was on a 10-match winning streak. What’s more, with no points to defend for the rest of the year—she did not play after the second round here for the rest of 2013—and will be targeting the No1 ranking again very soon.

Her first big hurdle, her first seed, was Kerber—though their fourth-round match was delayed on Court 1 by rain. But Sharapova has looked in imperious mood, dropping only seven games in three matches, and only once has Kerber beaten her in five previous meetings.

The road ahead for the winner, however, was already decided, in an intense battle between Cornet and the fastest-rising star in the women’s game, Bouchard, who at just 20, is the only woman this year to have reached two Grand Slam semis. Eighteen months ago, she was ranked 144, seven months ago at 32—and the 2012 Wimbledon Junior champion was looking wonderfully at home on the grass.

After taking the opening set on a tie-break, Bouchard looked like she would be taken to a third-set decider when Cornet took a 5-3 lead in the second. However, the Canadian raced through the last four games to snatch with win, 7-5, though the two women ended the match separated by just three points.

Bouchard, who is rapidly becoming an outside favourite to win the title here, was naturally delighted:

“I’m really excited to win and proud of the way I fought out there. I’m very excited to be in another Major quarter-final, but I need to stay focused. It’s important not to be distracted and take it one match at a time. But, of course, I want to go further.”

At the start of the tournament, everyone was relishing a face-off between the former champion Williams and the young woman who hopes to take her turn in the not too distant future. Now there is the same anticipation of a Bouchard-Sharapova match…

On Tuesday, Halep will take on another super-fast riser in the rankings, Zarina Diyas, up 157 places to her current No72 in the space of a year. The 20-year-old reached the third-round of the Australian Open in her debut Grand Slam this January, too, and got some grass practice in reaching the final of the ITF Nottingham event a fortnight ago.

The other match in this quarter, also delayed to Tuesday, will be contested between Yaroslava Shvedova, who advanced when Madison Keys was forced to retire, and last year’s finalist Sabine Lisicki, who won a terrific contest against the 2008 French Open champion, Ana Ivanovic.