Wimbledon 2014: He said, he said… Roger Federer and Novak Djokovic

Wimbledon 2014: Roger Federer and Novak Djokovic are preparing to face off in Sunday's final at SW19 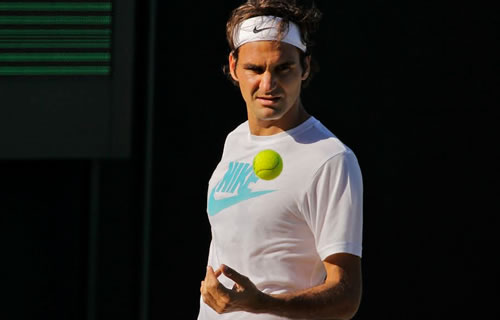 Roger Federer is aiming for his eighth Wimbledon title

There were rumours that this could be the year when one of the rising stars of men’s tennis broke ground that few others have managed in the last decade: a place in the Wimbledon final.

And to the credit of the ‘new generation’, those born in the 1990s, two did make a huge impression by reaching the semi-finals. Grigor Dimitrov and Milos Raonic issued a notice of intent: Now in the top 10, they are ready and waiting to fill any vacancy left by one of the “big four”.

But at this year’s Wimbledon, it has once again come down to age and experience: No1 seed and 2011 champion Novak Djokovic against No4 seed and seven-time champion Roger Federer.

And of all the rivalries between the famous quartet, this is a favourite, pitching Federer’s all court fluency, attack and tactical guile against the super-fit, super-flexible body and intellect of one of the greatest defenders in the game.

Both boast flat baseline power, challenging sliced backhands, and an ability to turn defence into attack at the drop of a hat. Their rivalry, perhaps more than any of the matchups between the top four, is akin to physical chess—and it can be magical.

Federer, after slipping to his lowest ranking in more than 11 years earlier this year—No8—will see himself back to No3 next week. But for Novak Djokovic, victory would be doubly sweet. For just as he did when he won in 2011, he would claim back the No1 ranking from Rafael Nadal.

How did they feel about themselves and each other before the final?

“I said it before the tournament, it’s probably going to be one of the guys we expect to be in the finals. Novak did his end; I was hoping I was going to be the other one. So I’m very happy with that.”

“I mean, look, it’s going really well. My game’s back where I hoped it would be from one year ago. Things were difficult all of last year, most of the year, so I’m happy I worked hard off the court to get myself back into shape and back into contention for tournaments.

“This year’s been very solid, I’ve reached a lot of semis and finals. I also got two titles already. So I think that really gave me confidence to believe that I could go a step further.”

[On Djokovic] “Well, we both like to be close to the baseline. We both like to take charge, especially on quicker courts. He has a wonderful way of either redirecting or taking the ball early, taking pace from the opponent. So I think that’s what makes him so hard to play. There’s not really a safe place you can play into.

“Novak can hurt you down the line or cross court on both sides. He’s really improved through the years. His forehand, his serve, his movement clearly is what stands out the most at this moment. He’s really been able to improve that and make it rock solid.

“I think for me it’s really important to stay aggressive against him. And especially here at Wimbledon… it’s not like on a slow court where you can maybe manoeuvre the other guy around so much. I think on grass it’s a bit more straightforward and I think we’re both aware of that.”

[Summarising their rivalry] “Athletic: it’s been good. I must say I’ve enjoyed the matches against him. We didn’t come through the rankings together, so I was established while he was coming up. I think it was totally different for both of us. You know, we saw each other in a different light than we see each other today when we’re both ranked high, we both achieved a lot. Things have clearly changed over time… it’s been a cool rivalry, in my opinion.

“Losing three out of four last Grand Slam finals, it cannot be satisfying, of course. I don’t want to sound like I’m not appreciating to play finals of Grand Slam. It’s already a huge result. We cannot take that for granted. But, again, I know that I can win the title. But it’s an experience. It’s a learning process… It’s mental in the end of the day.

[On Federer] “Every rivalry I have with these three guys is special and unique in its own way. Of course, I respect Roger and everything he has achieved in his career as a player. To come back and play finals of Wimbledon again, it’s incredible what he’s doing. But, again, when we come to the court, that ends. I’m there to win whoever is across the net.”

“Yes, we only played once [on grass]. It was a four-set win for him in semis of Wimbledon, so it’s a good chance for me to try to win against him on his favourite surface, on his favourite court. This is where he has the most success in his career, winning many titles. He’s been looking very good throughout the whole tournament, very dominant with his matches. I’m sure that he wants to win this title as much as I do.

“And, of course, most of the matches we play against each other went the distance. So I’m going to be physically ready and fit to go the distance this time.

“The key against him, of course, is trying to not allow him to dictate too much because he likes to be very aggressive, he likes to come to the net. I’m going to have to be able to get as many returns back in the court and try to also stay closer to the line, protect the baseline.”

“[Federer’s] level has been very high, I have to say. I’ve been watching him in a few matches… Hopefully I can tactically prepare myself and execute well to not allow him to be at his top shape on Sunday.”