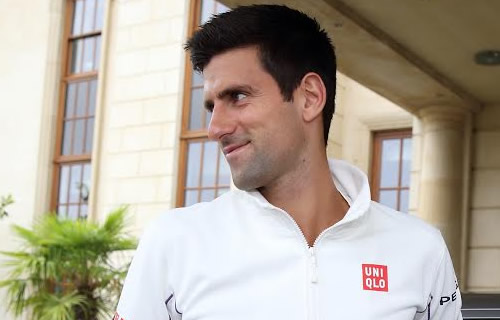 And so it was left to the top seed and 2011 champion Novak Djokovic and No4 seed and seven-time champion Roger Federer to fly the flag for the ‘big four’.

Each took on a 23-year-old who had long promised to help break the stranglehold that Djokovic and Federer, Rafael Nadal and Andy Murray had taken on the Grand Slam scene.

Indeed only two men since 2005 had done it and the first, Juan Martin del Potro at the 2009 US Open, had been plagued by wrist injuries and not managed it again.

However a new name, 29-year-old Stan Wawrinka, did break through at the start of the year and, despite his age, had injected even more purpose into the swelling hope of a new phalanx of young players.

As one of them, Milos Raonic—who would take on Federer in the second semi-final this year—said: “I think the one result that stands out the most this year has to be what Stan did at the beginning of the year. It doesn’t have to be from a young guy. I think it has to be from this group that’s considered contenders but haven’t been able to break through. I think that one, beating Novak and Rafa in that same time, I think that one was the biggest sigh of belief and relief for a lot of guys.”

Raonic had been the first of these young guns to break into the top 10, seeded here as No8, and Dimitrov was assured of following him when Wimbledon was done having reached his first Grand Slam semi. And in truth, he had perhaps been “the anointed one” at Wimbledon since he won the junior title here in 2008.

Right from the start, the handsome Bulgarian promised something special and slowly but surely married his plentiful skills to become the youngest player in the top 20 and then the top dozen. He was seeded No11 at Wimbledon after winning the prestigious grass crown at Queen’s Club, this third title of the year.

His elegant and explosive game, designed it seems, for grass, also came on in leaps and bounds after tying up with Roger Rasheed—a hard task-master but one who has gelled with Dimitrov to take the young Bulgarian’s fitness, movement and confidence to new high.

He had played the formidable Serb four times, three times last year, and he had actually scored a win over him in Madrid in a long, tough battle. Djokovic got his revenge weeks later at Roland Garros, but they had not played since Dimitrov made the step-change with his first title last year.

The Bulgarian had also shown just how dangerous he was by taking out defending champion Murray in straight sets, and with the crowd behind him, as has become the norm wherever this charismatic player plies his attractive single-handed game, many anticipated a very close contest.

The experience of the six-time Grand Slam champion showed straight away, as he played strongly from the baseline and served cleanly, while Dimitrov could not settle. In the fifth game, he double faulted, hit a backhand and then a forehand long to concede the first break. A couple of love holds after that could not compensate and Dimitrov was down a set in under half an hour, 6-4.

The second set did not look too encouraging, either, as Djokovic really seemed to hit his rhythm, fending off a break point and then pressuring Dimitrov again. A double fault started his problems in the third game and an unlucky net cord spun a forehand long to give up the break, 1-2.

But there was a change afoot as Dimitrov’s game began to flow more freely, he came to the net for some fine volleys and drew a forehand error for break point. Djokovic wrong-footed his opponent at the end of a long slice exchange and held for 3-1. But Dimitrov resisted another break point in the fifth game and began to chip and charge, slot his forehand down the line and earned two break chances. A netted return from Djokovic and they were level again, 3-3.

Dimitrov had his tail up, and buoyed by a huge roar from the crowd, he broke again with some deft net finishes and took the set, 6-3, with a near flawless hold of serve.

As everyone had hoped, this was warming up nicely, now with both playing great all-court tennis, attacks mixed with chasing defence—and surely Dimitrov is one of the few players as flexible in reaching for balls as Djokovic.

The Serb it was who faced the first break point, too, but some clutch serving kept things level. At 5-5, they even mirrored one another by both ending a lunging rally flat on the court. Inevitably it moved to a tie-break and Djokovic upped the attack to go 3-1, aced for 4-1 and a double fault from Dimitrov made it 5-2. Djokovic’s serving was spot on and he took the set with ease, 7-2.

The clock ticked past two hours as Dimitrov had a nightmare service game of three double faults, then a forehand hit long, for a love break, 1-2. But Djokovic, too, was now in and out of focus, irritated by the court, the balls and more, it seemed. Dimitrov broke him straight back and then fought off two break points to lead, 3-2: They had 110 points each.

Now it was Dimitrov’s turn to waste a break chance—in fact three of them—and neither seemed able to put together a sequence of solid points despite individual points of brilliance. A one-minute service hold from Djokovic was followed by one in which he faced another break point, but he dug deep and roared himself to a hold.

It would, in the end, take another tie-break, and this one was much closer than the first, with both men slipping and sliding all over the court. Dimitrov led 6-3, but Djokovic saved all three set points, and at 7-7, Dimitrov fell heavily, and that seemed enough to break his focus. Djokovic took the closing point, 9-7, for a hard-won victory, and his third Wimbledon final in the last four years.

Djokovic said afterwards: “In the semis of Wimbledon playing a future star, he deserves respect, it was a tough match overall. The fourth set could have gone either way…

“Dimitrov has quality shots, especially his running forehand, and great touch. He plays equally well when he’s aggressive and when he’s defensive. That’s part of his game that he has improved immensely in the past six to eight months. It was a good win for me. I’m really glad to be part of another entertaining match. Now I’m looking forward to the championship match.”

Should Djokovic win the final, he will reclaim the No1 ranking, but he would not know for some time yet who he would need to beat.