Wimbledon 2014: Novak Djokovic isn't thinking about the big names already out of SW19 after booking his place in last four 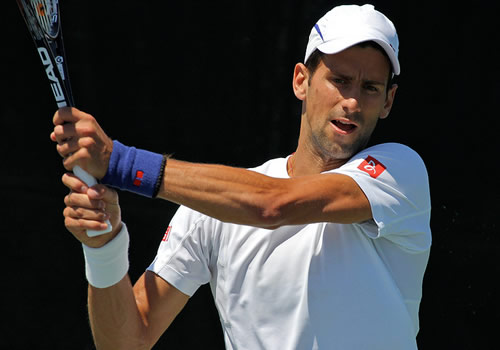 Novak Djokovic isn’t thinking about the big-name scalps which have opened up the Wimbledon draw after setting up a semi-final match against Grigor Dimitrov thanks to victory over Marin Cilic.

The Serbian, who is the highest seed left in the draw, stayed on course to reach successive SW19 finals after a 6-1 3-6 6-7 6-2 6-2 victory over Croatian Cilic on Court No1 on Wednesday.

Djokovic is bidding to win his second Wimbledon title and seventh Major, whilst 23-year-old Dimitrov, who beat defending champion Andy Murray in straight sets, is in his first Grand Slam semi-final.

“It doesn’t affect me at all because I just try to focus on my own matches because that’s something I can influence,” Djokovic said.

“Focusing on the next opponent obviously, you’re expecting always the top guys from outside perspective, media, fans, for those guys to reach the final stages.

“But if it doesn’t happen, it’s obviously a surprise. But, again, it shows and it proves that Grand Slam you cannot underestimate any opponents.

“There are new young players like Kyrgios and Dimitrov that are challenging the best and are winning against the best players in the world.

“That’s why they deserve to be where they are now.”

Djokovic, who became increasingly frustrated with the noise coming from Centre Court and “Murray Mount” as the defending champion crashed out, sympathised with the pressure on Murray’s shoulders at Wimbledon.

“I was saying before here that he goes through immense pressure and expectations in Wimbledon because he’s somebody that everybody relies on and expects him to go far and win the trophy,” Djokovic added.

“He has done that. I’m sure that he felt a huge relief.

“But again, now he has faced another experience: to be defending champion for the first time at Wimbledon. It’s quite different. It’s another way of pressure that you feel.”