Wimbledon 2014: Rafael Nadal comes from a set down to beat Martin Klizan in the first round at the All England Club 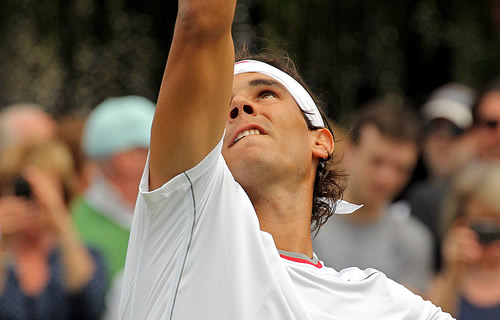 Rafael Nadal is through to the second round at SW19 Photo: Marianne Bevis

It would have been quite understandable if there were some nerves and tension in the legs and shoulders of three of the biggest names in men’s tennis as the sun hit its peak on opening Tuesday at the Championships.

For between them, the world Nos1, 3 and 4 had won precisely one match between them at Wimbledon in 2013.

World No1 and two-time champion Rafael Nadal, who reached the final at Wimbledon in 2011, had won just one match in two visits since. A second-round loss in 2012 was followed by a shock first-round exit last year to Steve Darcis—the first time he had lost in the opening round at a Grand Slam.

In his usual way, he talked before the match of difficulties rather than hopes: “I am feeling better this year than last couple years, seriously. Personally I feel that I am doing things better. I am able to move myself more free now with less—I’m not scared about my knee. That’s the most important thing for me.

World No4 and seven-time Wimbledon champion Roger Federer arrived this year with something to prove, too. As defending champion, he made his earliest exit in 11 years on the surface that has shown off his craft to its greatest effect: Sergiy Stakhovsky was on fire in their second-round match.

His pride was clearly stung, but he is rarely one to doubt himself. Instead, he set about trying to ensure it didn’t happen again: Intense training regimes, a new racket and, perhaps the biggest decision, a new coach in Stefan Edberg. Big, because Edberg’s serve and volley talent could bring that X-factor to Federer’s campaign for a record eighth Wimbledon title—which he believes is possible:

“I always enjoy coming back here. It’s a pleasure being healthy and really fit and eager to give it a go again. I feel I have a very good chance again this year. I’m really coming in with a much better feeling than maybe in the last year, for instance.”

For Stan Wawrinka, the Australian Open champion, there was perhaps even more to be proved. For the Swiss had won only one match in his last four appearances at Wimbledon: He reached the second round in 2011.

Yet the strengths of his game seem suited to the grass, as he showed against Andy Murray in the fourth round in 2009, a gripping five-set loss. He reached the semis at Queen’s last week, too, and was upbeat about his chances of a better outcome at Wimbledon this year.

“I know I can do really well, but it’s always tough Grand Slam to play,” he said. “The first match is never easy, first few days there. You can see there is always some big surprise. So you need to be ready for that.

“I know that if I play my best tennis I can be really dangerous there.”

Wawrinka was the first of the trio to try his luck, and he laid down a strong marker against Joao Sousa with a 6-3, 6-4, 6-3 win in a tidy hour and 35 minutes. He hit 18 aces and 34 winners, every inch top-three man even against a man ranked at a very decent 41 and with wins over David Ferrer and Grigor Dimitrov to his name.

Federer quickly followed his compatriot into the next round—quickly being the operative word. He took an hour and 33 minutes, but had match points at 5-2 with just 80 or so minutes on the clock. The spirited Italian Paolo Lorenzi, at 32 the same age as Federer but separated by 79 places in the rankings and by 79 titles, resisted a clutch of deuces and five break points in some very fine rallies. The crowd loved it, safe in the knowledge that they favourite would eventually seal the win, which he did, 6-1, 6-1, 6-3.

And the influence of Edberg and the new racket—their first outing at Wimbledon—was all over Federer’s attacking shot-making. The Swiss started with two serve-and-volley winners, chased down a lob to make the first break and fought off a couple of break points to take the first set with an ace.

He broke three times in the second with just 54 minutes on the clock. By the conclusion of the third, Federer had accumulated 30 points from 42 net plays and made 40 winners to just 20 errors. And that, judging from his comments afterwards, was despite the speed of the court:

“I’ve been trying to play some serve and volley last week in Halle, but here the surface is slower again. I have to readjust and see against who does it work and how do you do it. So it was a good first match for me to get a feel for how much can you actually do it.

“You need to be able to serve well, move well at net, anticipate well, come in on the right shots in the right way. Many things need to work well, but it definitely is still worth it.”

It was a treat indeed, often recalling Edberg in full flight. But across on Centre Court, Nadal was not having such a good time of it.

Playing in his 10th Wimbledon, he was in search of his 700th match-win, a target that had eluded him in Halle, where he played straight after his record-making run to the French Open title.

He took on the left-handed 24-year-old Martin Klizan on Centre Court, a man who took out Kei Nishikori at Roland Garros and beat Fabio Fognini to win the Munich title.

The Slovak started worryingly well for Nadal fans, playing aggressive tennis to hit 13 winners to the Spaniard’s eight, and broke to take the first set, 6-4. And Klizan started the second with chances to break, too, but Nadal was beginning to find a strong groove on his serve and snuffed out the opportunity. Klizan dropped his head in despair, was broken, and lost the set, 6-3.

Nadal began to look much more confident, came to the net more often—and he is a very solid net-player when he chooses to come forward—and began to outscore Klizan in winners. Nadal was up another set, 6-3, and in danger of running away with the match, especially after making an early break in the fourth. Klizan managed to break back but it was a temporary respite, and Nadal took set and match, 6-3.