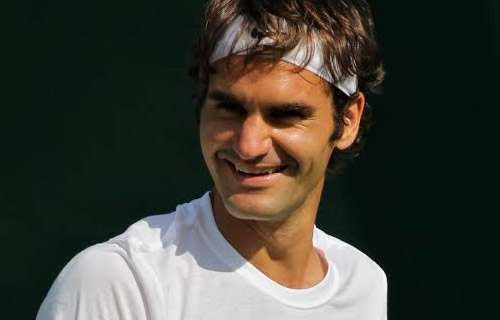 For tennis purists of a certain age, this particular day offered up a picture-perfect schedule. Not only did this four-man segment of the draw feature entirely single-handed backhands, but the sun also finally returned to SW19.

The men in question set Swiss against Spaniard twice over: No4 seed and seven-time champion Roger Federer played No23 seed Tommy Robredo; No5 seed Stan Wawrinka was against No19 Feliciano Lopez.

However the quartet boasted not just four one-handed backhand but also four men on the mature side of 29.

Wawrinka, in fairness, does not turn 30 for another nine months. But the other three were each 32, though none of them had shown much inclination to hand over their batons to younger hands just yet.

Federer, who last year suffered his poorest Wimbledon in more than decade, went on to have—by his standards—a difficult summer and autumn, too. He contended with a back injury that first hit him at Indian Well, and failed to add to his only 2013 title from Halle. He was even touch-and-go for the World Tour Finals for the first time since 2001 as he slid to No7 for the first time in 11 years.

It was a difficult phase for the Swiss, losing to unexpected players such as Federico Delbonis, Sergiy Stakhovsky and Daniel Brands. Another of those players would be Robredo, who beat Federer for the first time in 11 meetings in the fourth round of the US Open—and in straight sets.

So this contest, their sixth consecutive match at a Grand Slam and their first since that US upset, had a certain frisson.

But 2014 had undoubtedly seen a rejuvenated Federer: new racket, new coach in Stefan Edberg, and physically primed from the intense training blocks that he had been forced to miss in 2013.

The semis at the Australian Open were followed by the title in Dubai and finals at Indian Wells and Monte Carlo. The arrival of a second set of twins in May gave him little time to consolidate his clay season, but come grass, the most dominant player of his age on this surface was back.

And fresh from his seventh Halle title, he had looked in superlative form in reaching the fourth round: He had dropped the fewest number of games here, 23, since reaching the same stage in 2004.

In Robredo, he faced a man whose biggest success has come on clay but who nevertheless has an attacking game, an elegant mix of slice, angles and touch. A former top-five man, Robredo missed much of 2011-12 for leg surgery, but surged back from No471 to his present 22, winning his first titles in two years.

But this was the Spaniard’s first fourth round at Wimbledon in his 13th visit, and the difference was laid bare for all to see.

It became a showcase for all Federer’s grass magic: swinging aces, serve-and-volley plays straight out of Edberg’s book, pick-ups off his feet at the net, and backhands of such grace and variety that at times they drew gasps from this appropriately elegant circular arena.

He broke straight away, held to love, broke in the sixth game and served out the set, 6-1, with a backhand winner. He dropped only three points on serve.

The second set was even tougher for Robredo, though he did hold onto a couple more games. He managed not a point in 20 Federer serves, and trailed for the whole set after being broken to love in the opening game. There was much to relish, and Robredo played his part with some beautiful backhand slicing of his own and increasing forays to the net. His problem was that he could not match Federer in any department. With 54 minutes on the clock, the well-oiled Swiss machinery was two sets up, 6-4.

The third was a closer affair, helped by a drop in first-serve strike rate from Federer and 11 winners from Robredo, who went on the attack whenever he could. The Spaniard fought off a break point in the opening game but finally buckled under the pressure in the seventh as Federer slotted away a silky forehand winner.

Federer faced his only break point of the match in the very last game, perhaps distracted by a bellowed marriage proposal—from a man—as he served. But his confidence flowed like his tennis, he serve-and-volleyed on two second serves, and sealed the win, 6-4, in 93 minutes.

The scoreline and stats suggested an inexperienced opponent rather than one who had beaten Federer at the US Open last year. But just as in every match so far, the Swiss scored twice the winners to errors, and he remains unbroken in the tournament. For added value, he also recorded an extra milestone, overtaking Jimmy Connors for the most Grand Slam quarter-finals in the Open era, at 42.

He was low-key about his form in a very-hastily gathered press conference—Switzerland was to play Argentina in the World Cup an hour later!

“I’m happy I’m physically back where I can put myself in contention. Now I’m confident again, which is huge in sporting terms. I’m happy I got through the first rounds here rather comfortably. I don’t think I’ve lost my serve yet and I’m returning well. I’m in command of the points. That’s where you need to be early on to then be able to perform against the best players.”

And he will now meet one of the best players, the Australian Open champion, friend and compatriot Wawrinka. The younger—and higher ranked though not higher seeded—Swiss also beat him in their last match, the Monte Carlo final.

Stylistically, though, Wawrinka is a very different kettle of fish, with huge power on serve, a love for attacking play and perhaps the best one-handed backhand on show today. He strikes clean and true through the ball, now flat, now with top-spin, always with great economy, in a truly magnificent shot.

Against Lopez, he played another powerhouse, a rare Spaniard raised on serve and volley courtesy of strength and being a singled-handed leftie. And the charismatic Spaniard’s record on grass and at Wimbledon have been outstanding. Three times a quarter-finalist here, he also arrived with 11 wins in his last 12 grass matches, reaching the final at Queen’s before defending his Eastbourne title.

But he had come through a tough third-round match against John Isner, and faced two more tie-breaks in this match before Wawrinka managed the only break of the match, and served out the victory, 7-6(5), 7-6(7), 6-3 in just under two hours.

The Swiss struck 31 aces, made only eight unforced errors, and won 22 out of 25 net plays.

With serving and volleying like that—not to mention that backhand—plus the confidence of a Grand Slam champion, Stan the Man’s first contest with Federer on grass, and in his first Wimbledon quarter-final, promises to be something very special indeed.