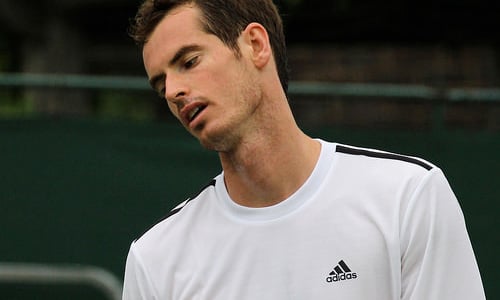 Wonderful Wednesday at Wimbledon: Sun hot and bright, crowds full of cheer—and Pimms—to cheer on home hero Andy Murray; Even the Royals had turned up, to take in perhaps the best schedule so far of the fortnight.

The problem with a perfect schedule is deciding where to look, where to be—at least it is for those lucky enough to have a choice.

Were it not enough that each of the big show-courts opened with a cracking women’s quarter-final, they were followed by a quartet of men’s quarters to really whet the appetite.

And no, the eight stars of the men’s draw did not feature the “big four”. The newest and brightest star in this year’s Wimbledon had seen to that. The 19-year-old wild card and the youngest man in the main draw, Nick Kyrgios, produced a firework display of shot-making to take out the No2 seed, world No1 and two-time Wimbledon champion, Rafael Nadal in the fourth round.

But they did feature four Grand Slam champions, three of them at Wimbledon: seven-time winner Roger Federer, defending champion Murray and 2011 champion and losing finalist last year, Novak Djokovic. And they did feature to more grass court titlists, No11 seed Grigor Dimitrov and No26 seed Marin Cilic.

And it was the latter two who faced the unenviable task of taking on Murray and Djokovic in the first quarter-finals. On Centre Court, Murray arrived, as he has done for every match, to a standing ovation, and his form was perhaps his best since he won here last year. He brought to the court a 17-match winning streak at the All England Club, adding the 2012 Olympic gold to his haul, and this year he had reached his seventh consecutive Wimbledon quarter-final for the loss of the fewest games in reaching any Grand Slam quarter—and had not dropped a set.

But Dimitrov has been a champion in waiting since he first burst onto the Wimbledon stage as the junior titlist. Right from the start, he promised something special, and in 2014 he, along with Federico Delbonis, became the only players born in the ‘90s to win titles—and Dimitrov had three, including the prestigious grass crown at Queen’s Club.

His elegant and explosive game, with great touch and a glorious single-handed backhand, seems designed for grass, but he came on in leaps and bounds after tying up with Roger Rasheed—a hard task-master but one who has gelled with Dimitrov to take the young Bulgarian’s fitness, movement and confidence to a new high.

I made many mistakes, unforced errors, and then started going for too much and taking chances that weren’t really there. So it was a tough day all around

Murray and the Wimbledon faithful were right to be on edge while soaking up some glorious rallies, for Dimitrov, having fended off an opening break point in a tense couple of games, cracked open his popular fluid, clean hitting game.

He went after Murray’s shots, chipped and charged and, just as impressive, lived with one of the best defenders in tennis in some extended baseline exchanges of skimming, sliced backhands. It was one such chip that opened up the court for a passing shot on break point in the fourth game and then consolidated with a love hold for 4-1.

Another fine backhand rally drew more break points in the sixth and a Murray error made it 5-1. The crowd tried to rouse the 27-year-old as he opened the next game with a cross-court winner, but Dimitrov was far too zoned for any wavering and took the set, 6-1.

The second set was altogether closer as Murray settled, defended brilliantly, and fought off a couple of early break points with some big serving.

But the pressure was relentless, and yet another wonderful backhand exchange in the seventh game was countered by Murray and a huge fist pump. Dimitrov did break through for 4-3 but the lead this time was temporary as Murray broke straight back and then defended break point with an ace. The crowd rose to its feet in celebration: This one would go to a tie-break.

There was nothing between them in the set as they rallied to 4-4: 39 points each with roughly the same stats down the whole page. But Dimitrov got the crucial point against serve for 5-4 and served out the set with a touch volley and backhand volley winner.

There was no backing off by Dimitrov, no matter how the fans encouraged Murray at each glimmer of a chance. There were precious few, it must be said, as Dimitrov opened his chest in surely the most expansive backhand action in tennis, his racket ending somewhere behind his head.

Murray’s head began to drop but the 23-year-old Bulgarian looked as cool as a cucumber, breaking the home favourite in the sixth game courtesy of a double fault and breaking again for set and match, 6-2.

With his first Grand Slam semi-final, Dimitrov will become the first Bulgarian man to break into the top 10, having started the season at 23. It may have been while coming but it was worth the wait.

Murray condemned his own poor play but praised that of his opponent, before vowing to go on and work harder.

“I started the tournament well, I was playing good tennis. Today was a bad day from my side. I made many mistakes, unforced errors, and then started going for too much and taking chances that weren’t really there. So it was a tough day all around.”

Dimitrov concurred: “As soon as we started warming up, I sensed his game wasn’t at his highest level and I was pretty confident and playing good tennis. The first set helped me get into a good rhythm. The second set tie-break was a key moment for me. Coming into the third set, I knew I had a lot of things under control.”

By the time Murray had finished his press conference, there was already an upset looming for another Wimbledon champion: Federer lost the first set to Wawrinka under a torrent of big serving and winning backhands. And the other former champion Djokovic was two sets to one down on Court 1.

Semi-final day at Wimbledon was promising to have a very different look.