Wimbledon 2014: Marianne Bevis takes a look back at some of the stand-out quotes from the top players after week one 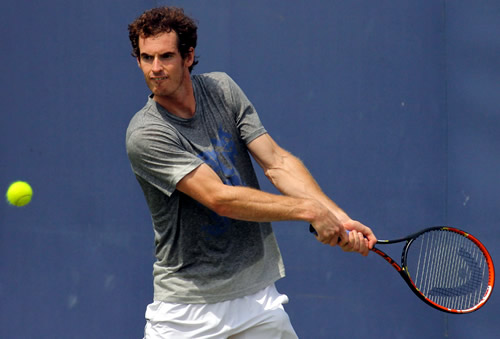 Middle Sunday is a Wimbledon ritual: This remains the only Major to give the players, volunteers, fans—and courts—a rest at the half-way point of the tournament.

This year, unusually, a few matches scheduled for week one are actually to be carried over to week two after Super Saturday was hit by the first rain of the week. It is little cause for concern at Wimbledon, though.

Here, the days are not broken into two sessions, or interrupted by on-court interviews, musical interludes and other supplementary entertainments.

And the one-session-a-day schedule surely offers some of the best value tickets on the circuit. Every seat on Centre Court on opening Monday cost £48 and on Magic Monday they are still under £100—for six, eight, maybe more hours of tennis.

It is, quite simply, wall-to-wall, tennis, with courts across the grounds in action from 11.30 in the morning until the light fades at around 9pm. No 10pm starts or 1am finishes for players—and today, they enjoy a day to recharge, take a little practice away from fans and media, noise and distraction.

And what a blessed relief that must be, especially for the big names, the headline makers, and the ones who have upset the odds. For facing the media, even after a disappointing loss, can be like stepping into the lion’s den.

Here are some of the stand-outs so far, beginning with Andy Murray’s early difficulties with his off-court duties.

Andy Murray talked very frankly about early upsets with the media: “I think when I first came on the tour, I absolutely loved it. I enjoyed everything that went with it. I had no problems. I felt pretty free. There was no pressure.

I’m not scared about stopping playing tennis. I think I will have a good life after if I am healthy

“But then obviously I had a few problems with the media. It became hard for me. I didn’t feel like I was represented fairly. I don’t know, I went into my shell. I didn’t feel like I could express myself at all. I became very defensive because I felt like I was getting criticised about not just my tennis but my hair, the way I looked, what I was saying.

“It was a tough few years for me because my jump came quite quickly to playing in the Slams and being in press conferences. It was a quick transition. Then once I started to grow up and understand how everything worked, I was able to handle things much better.

“Obviously I’ve had good people around me that have helped me through tough moments and given me good advice when I’ve needed it. Now I feel like I’m a grown-up so I can handle myself fine.”

Rafael Nadal asked about his plans after he retires: “When the day arrives, I’m going to do other things. I’m not scared about stopping playing tennis. I think I will have a good life after if I am healthy. I like a lot of things, have a lot of hobbies, I have projects in my mind…

“The only thing I am sure of [is that] I will not stay in my house on the sofa watching the TV the whole day. I love to do things and I will do things.”

Novak Djokovic on Murray appointing Amelie Mauresmo: “Honestly, a bit surprised. It is an interesting decision. I’m sure that he knows why he has made that decision. But it’s definitely interesting.”

Venus Williams, 34 years old and playing some of her best tennis against fellow Wimbledon champion Petra Kvitova since being diagnosed with Sjogren’s Syndrome in 2011: “People have been trying to retire me since I was 25. For some reason in tennis we always do that to our players. It’s weird. We don’t encourage them to stick around. So I’m not getting out of here.”

And then asked if she thinks she can win another Grand Slam: “I want to win Grand Slams. Everybody does. No-one gives it to you. They snatch it away and say ‘mine’. That’s what I’ll have to do, snatch it, say ‘mine’ too. Growl if need be. That’s what it takes.”

And on ageing: “Well, wisdom has served me well. I’ve worn my sunscreen so I haven’t aged terribly. My knees are very tight, not saggy. And the crow’s feet have been kept at bay. So I’ll give myself an A+.”

I think I’ve grown through all the nicknames by now

Grigor Dimitrov, on being dubbed Baby Fed and, latterly, Mr Sharapova: “I think I’ve grown through all the nicknames by now. I think it’s time for everyone to come up with something better. I think all those things are starting to fade away. I’m proving myself not only as a player but as a person outside of the court. So to me that’s much more valuable.”

Lleyton Hewitt, asked if his wave to the crowd after his five-set loss to Jerzy Janowicz was for good: “I don’t know. You never know. I’m one injury away from hanging up the bats at any time. Obviously you appreciate the support out there today.”

Serena Williams on the dealing non-tennis questions, after being asked about Caroline Wozniacki: “Well, I’m just glad I’m not in that position where I have to address questions about my personal life. I’ve been known to deny a lot of things, so… I’m really losing focus up here. I’m trying to figure out when this is going to end. What’s the next question?

“I just think the longer these interviews go, you get to see more of a person’s personality… See, the questions change from tennis to Novak and then Rafa. It’s no longer about the match. Is this the last question?”

Maria Sharapova, asked her opinion on players in forthcoming Russia-Belgium World Cup match: “I’m no expert in football. I’ll tell you that straight off the bat. Any advice or any opinions you want, I’m not the person to ask.”

Prize for most inappropriate question, addressed to Simona Halep: “Pat Cash has spoken about some female players having to play without their bras on, the colour of their underwear contravene Wimbledon rules. What are your thoughts about that?”

Credit to the No3 seed for a straight bat on her answer: “I think it’s special to play here. They have the special rules because you have to be in white. I think it’s not really difficult to get white clothes. So I like this tradition.”

And finally… Roger Federer on time, the universe and—not Nadal, as the headline writers might have you believe: It was, in fact, the questioner who linked the Nadal/Rosol match to the issue of speed of play, after Federer won his second-round match in 94 minutes:

Question: Were you inspired [to comment on fast play] by watching a match on Centre Court earlier today?

“No, I just think it’s important that we, as players, play up to speed, because what I don’t want is that we lose viewers because we play too slow. I was talking in particular if the points are short—you cannot take 25 seconds. I know you need to focus—that you can do in 10 seconds. It just can’t be that we only see two points per minute. The rules are there not to be broken, but of course you need to give leeway to tough rallies and somebody who needs a bit more time.”

Question: Did you catch the first match on Centre Court today? “Not much, no. Why? Was it going slow? Well, it’s the umpire’s call at the end of the day.

“[In the Players’ Council] Basically we said we needed to just enforce the rule. It wasn’t a rule change… not just let it run its course every single time. What you’re going to see next is all of a sudden a shot clock. We said we didn’t need to go that far. We have seen it in so many other sports, people who push it too much, and then you have to go the other extreme to counter that.

“But I don’t think all of last year I got a warning. Did I always play under 20, 25 seconds? I’m not sure, but maybe I do get the benefit for playing quick most of the time.”