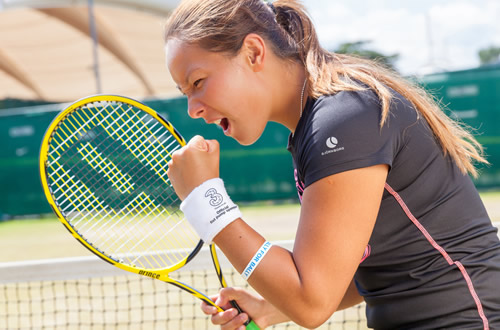 It is no secret that brands are always on the lookout for any ways to gain extra promotion during top sporting events.

But just when you thought the sport sponsorship market couldn’t get any busier, British Wimbledon hopeful Tara Moore has become the first athlete in history to sign a sponsorship deal for fist pumping during her matches.

Mobile network Three have agreed to donate £3 to charity every time the British No5 – who has been handed a wildcard for the championships – fist pumps during a match at the All England Club.

The company claim that it is the first celebration in any sport, in any part of the world, to become the subject of its own sponsorship deal.

Three have also vowed to make the same donation to Rally For Bally, set up in memory of Elena Baltacha, every time a player fist pumps during the men’s and women’s singles finals at SW19.

Spokesperson for Three Tom Malleschitz said: “We hope that by officially sponsoring Tara’s fist pump at this year’s tournament it will spur her on to dig deep and fight her way to win every fist-pumping point.”

The sponsorship has been arranged by Three to mark the imminent launch on 26 June of LG’s new flagship G3 smartphone on the mobile network.