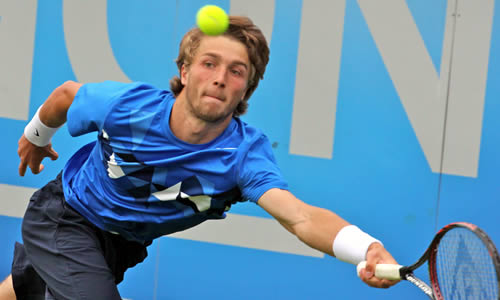 Liam Broady says he has enjoyed the spotlight in recent days after the unseeded Brit lost in straight sets to David Goffin in the second round at Wimbledon.

The 21-year-old dropped the first set after the 16th seed edged the tiebreak before his Belgium opponent went on to ease to a 7-6 (7-3) 6-1 6-1 victory over the Stockport man.

However, the wildcard, who is currently ranked at number 186 in the world, remained upbeat about his Wimbledon experience in his post-match media conference.

Broady said: “I’ve absolutely loved it. It’s been fantastic. I felt at home, again, on court against David.

“But off the ground, it was grueling, as well. I have to get used to that because the very best guys play with incredible intensity.”

And Broady revealed that his memorable five-set win has served to give the Brit some renewed direction in his blossoming career.

Broady added: “They asked me how it felt after beating Matosevic. I said I’ve got direction again.

“As everyone knows, the tour is a bit of a slug and a grind. It’s tough to see the end. That’s the fantastic thing about slams, light at the end of the tunnel four times a year.

“Just, again, to know that I can compete with these best guys and still have so much to improve on and be reasonably tight with Goffin, it’s immensely uplifting.”