Wimbledon 2016 will boast a record prize money total of £28.1m, with both singles champions receiving a cheque for £2m 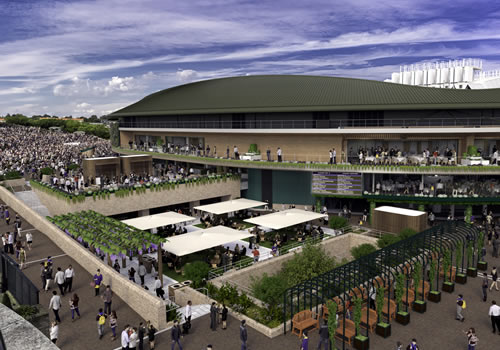 There will be a total prize money purse of £28.1m at Wimbledon this year Photo: AELTC: Wimbledon Images

Once again, the Championships at Wimbledon this summer will set a new record in prize money, it was announced at the All England Club’s annual spring conference today.

The total purse will rise by 5 percent to £28.1 million, an increase of £1.35 million over last year, with each of the singles champions breaking the £2 million barrier for the first time—up 6.4 percent from £1.88 million.

The doubles champions enjoy an increase of 2.9 percent, up to £350,000 per pair, while qualifiers pick up an extra 3.4 percent, which translates into £15,000 for players who lose in the third round of the qualifying tournament.

Meanwhile, wheelchair competitors receive a huge boost, not least because both the singles and doubles events will be held at the AELTC for the first time this year. The eight-draw singles will begin on 7 July, with the women’s final on 9 July and the men’s on 10 July. The total wheelchair singles and doubles prize money will be £150,000, while the four-draw doubles purse is £50,000.

Since 2011, then, the total Wimbledon prize money has almost doubled, while the tournament has, in the process, taken into account players’ concerns over the relatively poor rewards for those losing in the early stages of the competition. This year, for example, first-round losers will receive £30,000 compared with £11,250 six years ago.

However, it is not just the players who are benefitting from the long-term plans of the Championships, as Philip Brook, Chairman of the AELTC, said: “Wimbledon is strongly committed to supporting the future of tennis through investment in players, in integrity, in our facilities and in the grass court season.”

“Our increased investment in promoting integrity in light of the recent focus on these areas underlines our determination for Wimbledon to play its part in safeguarding the integrity of tennis and securing the public’s faith in our sport.” Richard Lewis, Chief Executive of the AELTC

· Additional data provision, monitoring and analysis: Video images and two sources of data to be captured on all courts for all main events, including at qualifying, to increase the ability of the TIU and betting operators to prevent potential opportunities for corruption; monitor and analyse match data, betting data and odds data in the event of a discrepancy or a betting alert.

· Increased education and support for players and officials: Verifying that all officials and players have undergone the Tennis Integrity Protection Programme (TIPP).

· Enhanced anti-doping provision: Anti-doping testing is carried out independently of the tournament organisers in accordance with the provisions of the WADA Code and the 2016 TADP. In addition to the TADP In-Competition testing, the AELTC will be implementing additional anti-doping measures.

· No1 Court: Designs now complete and contractor appointed; No roof in 2017, a fixed roof will be in place for 2018, and a retractable roof similar to that on Centre Court will be operational in 2019; Capacity will rise by 900 seats to 12,400; An anticipated £25 million raised by the Court 1 debenture release last week will be invested in these developments.

· Court 19: This is the last year that tennis will be played on Ct19, as it will become a new two-level plaza.

· Unreserved seating: Three-quarters of No3 court will now be available to ground ticket holders.

· Junior initiative: The Wimbledon Foundation, the AELTC and The Championships are opening six new courts (3 indoor, 3 outdoor) at Raynes Park for use by the Wimbledon Junior Tennis Initiative and Ball Boy and Ball Girl training.

· Following the addition of an extra week to the grass season in 2015, the three weeks before Wimbledon will be further enhanced in 2016 with the introduction of a WTA tournament in Mallorca.

· 2017 will see the re-introduction of a combined event at Eastbourne, a new combined event in Nottingham, and more than double the amount of prize money, funded by the AELTC, for ATP Challenger and ITF Women’s Pro Circuit grass court events.