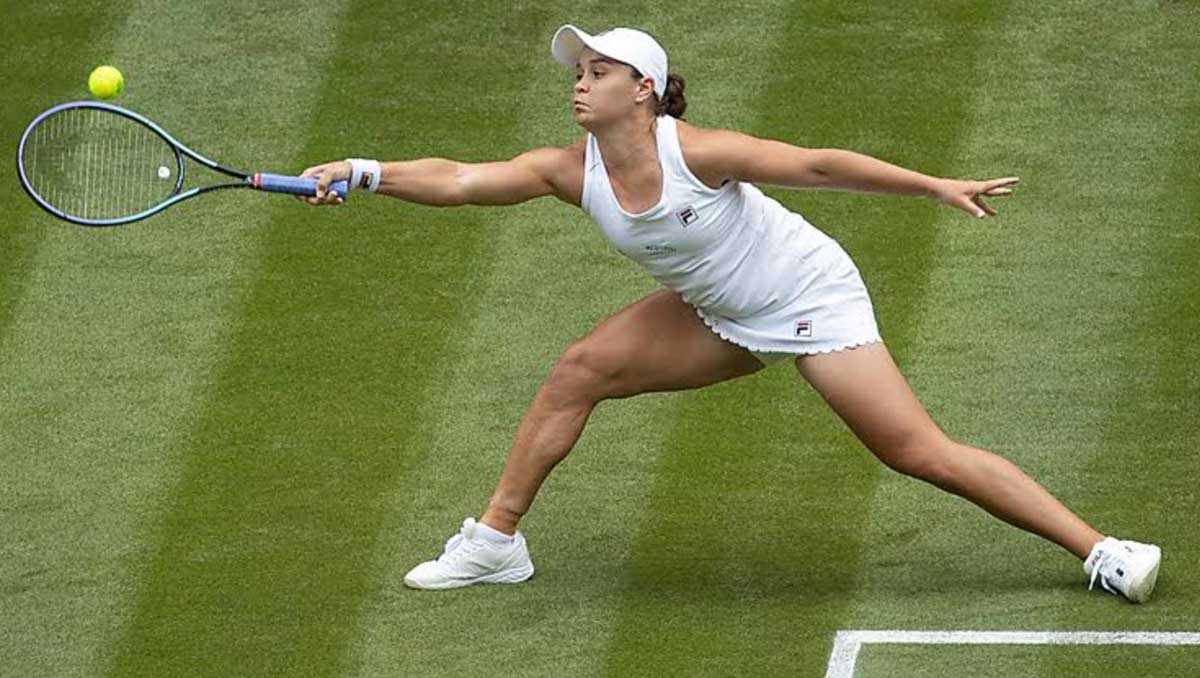 It is always a tough turn-around for the women who make it through to the last eight at Wimbledon. For they all know that they will be back playing their quarter-final matches the day after winning in the fourth round.

For one of the eight women, it was a faster switch than most. Australian Ajla Tomljanovic only completed her win late into Monday evening, after—somewhat bizarrely—her contest against the teenage Briton Emma Raducanu was last up on Court 1 following what turned out to be a four-hour-plus five-setter between Felix Auger-Aliassime and Alexander Zverev.

The men’s fourth-round match was a very entertaining affair, for sure, but it would have been just as entertaining had it been the last match—in the knowledge that the winner had a clear day to recover.

In the event, Tomljanovic won a little sooner than expected when Raducanu was forced to retire after an hour and a quarter, but the Australian was still in the midst of her press obligations as the clock ticked to 10.30pm.

That she then had to return for a 4.30pm showdown with countrywoman Ash Barty come Tuesday would only make what little recovery time she had more precious. After all, Barty was world No1, and had been since September 2019. She was already a Major champion—Roland Garros two years ago, when she also won the WTA Finals—and had bounced back from a long absence on the tennis road last year to win three titles and notch up 32 match-wins this year.

If Barty needed more grass credentials, she was the only remaining Wimbledon junior champion left in the women’s draw. And if she needed still more incentive, this was the 50th anniversary of the first Major victory of her mentor/idol, Evonne Goolagong Cawley. Barty was even wearing an outfit this year that deliberately referred back to Goolagong’s.

Certainly Barty has had a spring in her step and a glint in her eye here, looking confident and relaxed: at home. And she has made no secret of the fact that her dream is to win here. She told the BBC:

“It means a lot to be in the quarter-finals. I put in the work with my team and this is one of my dreams to win this tournament.”

She breezed past her compatriot, with easy in the first set, 6-1, but there were breaks on both sides in the second as the big Tomljanovic baseline game helped her keep Barty at bay. But once the world No1 had another break, she wasted no trouble serving it out, in a fraction over an hour, 6-3.

She repeated the message to the fortunate fans in Centre Court, just as the heavens opened outside again.

“This is a dream come true: I know you hear that a lot, but this is my dream. I’m loving every minute.”

However, perhaps the most eagerly anticipated match on a showery, windy day in SW19 was that between the only two women with more match-wins than Barty this season: Ons Jabeur and Aryna Sabalenka.

These two led the tour with 33 matches apiece, and were both at career highs, the former seeded 21, the latter seeded No2. They had got to their first Wimbledon quarter-final in exactly the same amount of time, 6hrs 28mins, but there was no denying that Jabeur’s run had been the stand-out: Venus Williams, Garbine Muguruza, Iga Swiatek—Major champions all.

Jabeur was also becoming something of a figurehead, breaking records all the while for Arab women. She arrived here as the first to win a WTA title—and it was on the grass of Birmingham. Her crowd-pleasing, all-court aggressive/subtle tennis had translated just as readily to Wimbledon where she became the first Arab woman to reach the quarters.

However, the powerful Sabalenka came into 2021 as one of the hottest players on the tour, with her third consecutive title in Abu Dhabi, a winning streak of 15 matches. She went on to win in Madrid and reach the final in Stuttgart. And their match soon settled into a battle of contrasts.

Sabalenka announced her tennis with a huge roar on each serve, and every pounded groundstroke. She battled through her first game, fending off a break point and a couple more deuces—producing a 122mph serve along the way, and 110mph second serve.

That done, Jabeur announced her own style—a big serve, plenty of angle and spin, including her particular fortés, the slice and dropshot. Her vision in picking up the power of Sabalenka was also impressive, and a drop/lob combo winner drew gasps of admiration from the crowd.

And for now, she held her own on serve, a love hold, but as they headed beyond 4-4, the powerful dominance of Sabalenka began to take a toll on the Jabeur serve, and in the 10th game, serving to save the set, she faced repeated deuces and a clutch of break points, finally conceding the game, 6-4, after a lively 36 minutes.

Both women faced 0-40 at the start of the second set, but while Sabalenka held on, Jabeur could not: 2-0. Not for long: Jabeur converted a break point with her now familiar drop shot, and from there, they stayed locked in a cat and mouse tussle, with the crowd willing Jabeur on with her penetrating and intelligent shot-making.

Not that Sabalenka lacked finesse—those doubles skills surfaced several times. She chased down drops to reply with her own, but it was the heat on her serve and her drives down both lines that kept Jabeur at bay. And serving at 3-4, the Tunisian was victim to an athletic backhand volley winner to concede the break.

Jabeur worked one more chance to break back, but Sabalenka snuffed it out, and served the win, 6-3, in an hour and a quarter.

Sabalenka, a huge personality with a huge game, has hinted at Major success since she was a teenager. Four finals and the Wuhan title in 2018 were followed by three Chinese titles in 2019, but she was also picking up big titles in doubles. Indeed she now has two Major doubles titles and was No1 at the start of the year.

Now with 10 singles titles, it looks as though perhaps the one weakness in her game—consistency in the big moments—has added to her armory. Now still just 23, she is into her first Major singles semi-final.

She will next play Karolina Pliskova, who beat the unseeded Viktorija Golubic, 6-2, 6-2, to complete her set of Major semi-finals. The former No1 had won three titles on grass, but had never reached the fourth round here until this year. And she has barely broken a sweat so far, but then she has yet to play a seed.

That next match will certainly be a bigger test, especially as Sabalenka won both their previous matches, back in 2018—including Eastbourne in a final-set tie-breaker.

And what of the oldest woman among the eight, who happened also to be the only former champion, Angelique Kerber?

The 2018 champion, now age 33, played Karolina Muchova, who reached the semi-finals of the Australian Open in this year. But Kerber, despite being seeded 25, arrived in London with her grass game back in great shape after winning Bad Homburg, and cruised to her fourth Wimbledon semi, 6-2, 6-3, in just an hour and a quarter.

They two have not played since levelling out at 2-2 in 2018, and have never met on grass. Kerber referred to that, but then added:

“Of course, it’s a good feeling already to have the trophy at home. I think it’s more about this tournament for me because when I was a kid I really looked forward to playing this tournament good and playing my best tennis here.

“Now I’m back. I’m coming after a really tough time. I was not playing good the last few months. Now winning, last week a tournament at home, now playing well here again, that means a lot to me.”