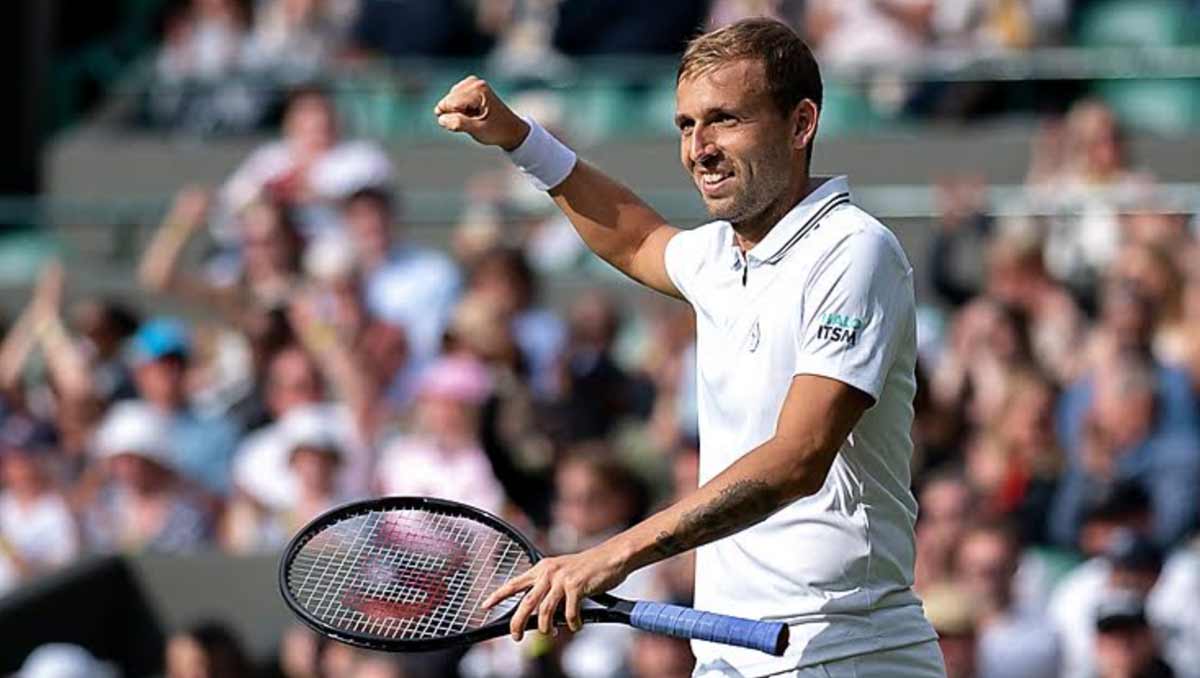 The weather had played more than a walk-on part so far in this year’s Wimbledon, though the sometimes torrential downpours that marked Monday and Tuesday certainly did not dampen the spirits. The crowds, albeit in smaller permitted numbers than usual, had come to let their hair down, with far more than usual strolling the grounds with mask over their face and a beverage in their hand.

There have been the familiar Wimbledon scenes of optimistic, stoical fans sitting on the roofless courts, eating their sandwiches and strawberries underneath umbrellas. Some do not even bother with such refinement: hoodies and cagoules will do just as well. And many do still wear masks, while there is no avoiding sanitiser stations and one-way systems—and everything, including tickets to get in, is contactless.

But as soon as players arrive on court, there are smiles and cheers and enthusiasm for a live, non-distancing sporting brouhaha. Even the usually sedate Centre Court crowds have made their presence felt, with standing ovations at the drop of a hat, cheers and applause after every point.

Of course, some of the starry names have drawn more celebration than others. No1 and defending champion Novak Djokovic, even after beating teenage Briton Jack Draper, was cheered to the rafters. Roger Federer—well it was nothing short of a roar when he returned to the site of his eight victories, now closer 40 and with repaired knees, but delighting the Wimbledon faithful nevertheless—until the shock fall and retirement of his opponent, Adrian Mannarino.

As for Andy Murray, is there a more admired athlete in the country than the former champion, former No1 and Olympic champion? He crowned an opening day with his first appearance here in four years. And he was back Centre stage on Wednesday, but he was one of the lucky ones.

For as play got under way on a cool but dry day, 27 first-round matches were yet to be completed or even started. And while most of the British players had got their first matches out of the way—and an excellent win by Katie Boulter had earned her a Centre Court showdown with No2 seed Aryna Sabalenka—the No29 seed Cameron Norrie had managed just one set against the former world No10 Lucas Pouille before the plug was pulled last night. It so happened that the Briton lost it in a tie-break.

Norrie came into his first seeding at Wimbledon in fine form, having reached the final at Queen’s, his fourth career final. In fact, he had won a lot this season to reach his career-high rank of 34, including the finals in Lyon and Estoril. Super fit, and now super confident, Norrie had been making a name for himself.

He and Pouille, a former world No10 full of talent, but undergoing elbow surgery less than a year ago, returned to a near-packed Court No2, and the two were neck and neck through some very fine games and creative rallies. Norrie had the chance to close it out at 5-4, but in the end, he broke to level the match, 7-5.

Pouille’s level dipped a little at the start of the third, and Norrie capitalised to break, 4-2. Another break, and the Briton had the third set, 6-2.

The fourth set swung back and forth, first one breaking, then the other, but in the end, Norrie got the better of some great rallies to break for the match, 7-5. He will next play wild card Alex Bolt, ranked 149, and so with a great chance of reaching the third round at Wimbledon for the first time.

But the home crowd had barely caught breathe before the top-seeded Briton Dan Evans was on Court 1 for his second match, against fellow single-hander Dusan Lajovic.

Evans, also at a career-high of 26, had really channelled his prodigious ability in the last couple of years with a new work ethic and intensity, boosted not a little by time with Federer in his Dubai training base.

The hard work and growing confidence brought rewards: a first career title at the start of 2021 and a first Masters semi in Monte-Carlo. His win over veteran grass aficionado Feliciano Lopez in his opener here also impressed the crowd—Evans has seldom smiled so much after a tennis match.

But Lajovic, who turned 31 today, was a dangerous opponent, ranked just outside the seedings. Evans beat him in their last meeting, in that Monte-Carlo run, but it was a tight affair of three sets lasting two and three-quarter hours.

Here, they began with some lengthy backhand sliced exchanges, won by Evans to break in the third game, 2-1. But Lajovic was playing Evans at his own game, and with a bit more weight, and broke back. Come the seventh game, Evans got another chance, and converted for 4-3, but could he consolidate?

He faced two break points but, watched by Davis Cup captain Leon Smith, Evans roared himself on, saved them, and led 5-3. Showing admirable patience and endurance, Evans stood his ground in some long baseline exchanges, and broke again for the set, 6-3.

He got the first break in the second, too, with a ripping forehand pass, 4-2, and went on to take it, 6-3. He looked to have the deal done after breaking twice in the third set, now with a good read on the Lajovic serve and just a step faster, but the Serb delayed things with a break back.

Evans worked a match-point against the Lajovic serve, and another courtesy of a double fault, but he would ultimately have to serve it out, and did so with a flourish at the net, 6-4.

Again he beamed as the fans cheered, but admitted:

“It was difficult today, the occasion, I was a little nervous and I think it showed in the tight moments.

Happy to come through… I’m exhausted. We had to double up yesterday and today, and you want to keep yourself fresh. It will be good to have a day off tomorrow!”

Meanwhile, wild card Katie Boulter, who rose to 89 in the ranks more than years ago, faced what seemed a mountain in the shape of the No2 seed Aryna Sabalenka, and while Evans was marching the finish line, she was battling into a third set on her Centre Court debut. Boulter had been forced off the tour with ongoing back injury, but she got some decent wins under her belt earlier this season, and made the quarters in Nottingham before coming to Wimbledon.

It was a tough second round match against one of the form players of the last year—Sabalenka could even take the No1 ranking if Barty did not go deep in the draw. They exchanged breaks in the first set, but Boulter got the second and decisive one to take the lead, 6-4.

The powerful Belarusian got the key break in the second to level things up, 6-3, and broke early in the third. Boulter needed treatment to her heavily strapped elbow, but then broke back—only to be broken again with some formidable serving from Sabalenka.

The spirited Boulter had more chances to break in the eighth game courtesy of a perfect lob—indeed would work six chances—but the world No2 held on. And some huge winners from Sabalenka drew one final error from the Briton for the match, 6-3.

· The unseeded Kei Nishikori, formerly ranking in the top four, became the 12th active player to record 100 Major match wins with a victory over Alexei Popyrin, 6-4, 6-4, 6-4.

· No10 seed Denis Shapovalov advanced to the third round without hitting a ball after Pablo Andujar pulled out with a rib injury. The Canadian will next play with the winner between Murray and German qualifier Oscar Otte.