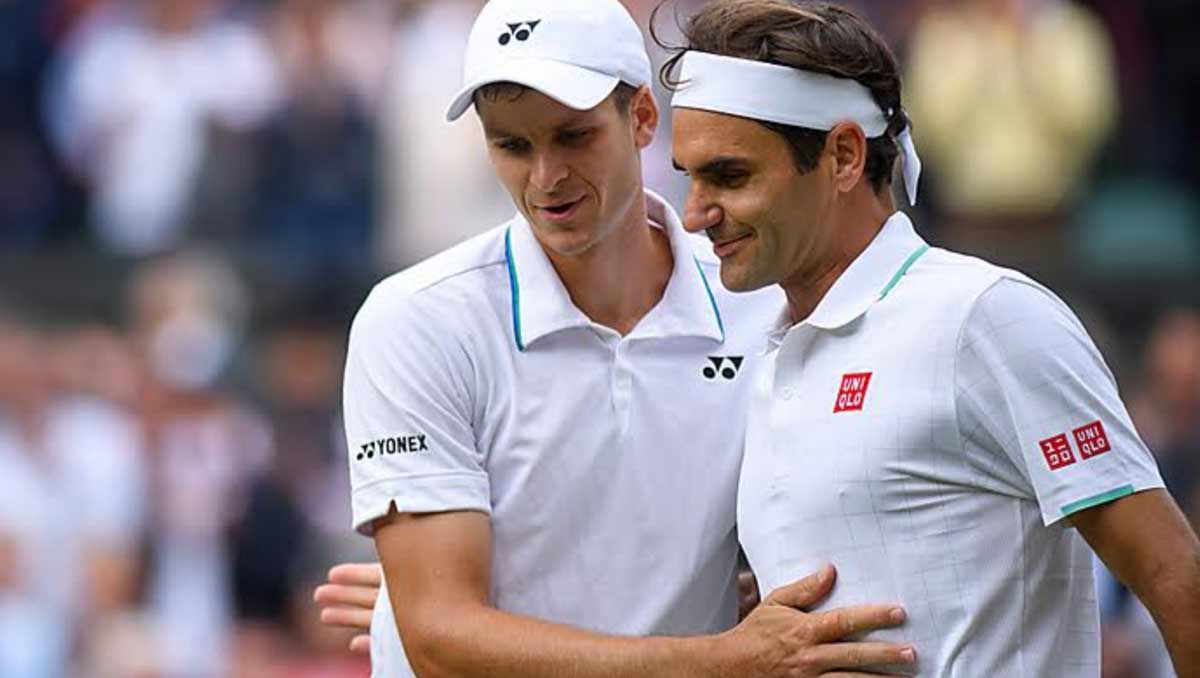 A month ago, there were certainly doubts surrounding the expectations that always follow Roger Federer to Wimbledon. For the eight-time champion, and runner-up here to Novak Djokovic in 2019, had not enjoyed the best of years, or the best of preparations for his favourite tournament.

After reaching the semis of the Australian Open last January, the Swiss faced two bouts of knee surgery, and did not return to competition for a year. Once back, and trying out the soon-to-be 40 body, he was still clearly a long way off his usual fitness levels, won one match in Doha, none in Geneva, and after three gruelling matches at the French Open, pulled the plug to protect himself from long-term damage.

What about grass, then? Halle, where he was a 10-time champion, proved a disappointment too—to himself as much as to his followers. He looked mentally and physically off the mark in a three-set loss in the second round, where he lost to a player he could face again in the semis here, Felix Auger-Aliassime.

“It was not a good attitude from my side. I was disappointed in the way I was feeling on court, the way things were going… I just think the whole difficulty of the comeback got to me as well a little bit. How much I have to push on every point, try to make things happen and I realised it was not going to be my day and there was nothing I can do… I started to get really negative, and this is not normally how I am.”

However, with each match at Wimbledon, from a shaky start against Adrian Mannarino to his performance against No23 seed Lorenzo Sonego in the fourth round, the oil was starting to ease the rust, and after a tough test in the opening set against the Italian, the Swiss turned it up a level to win in three sets.

But his draw was doing him no favours—the down-side of slipping to No8 in the ranks after that long absence. Two seeds were down, but now it was No14 seed Hubert Hurkacz, and the softly spoken Pole was deploying the kind of game that Federer usually enjoys—yet to an even greater extent.

In beating world No2 Daniil Medvedev, Hurkacz had won 50 points from 69 net approaches, 10 of them serve-and-volley plays. Across the tournament so far, he had made 134 points at the net—an extraordinary throw-back to old-fashioned grass tennis, but certainly a different challenge for Federer, who is usually the aggressor trying to take control inside the court.

Federer had beaten the Pole in their only previous meeting, but that was on hard courts and more than two years ago, and for the 39-year-old Federer and 24-year-old Hurkacz, a lot of water had gone under the bridge since then. For a start, the Pole who idolized Federer as he grew up, had won two titles this year, including the hugely prestigious Miami Masters. He had won only one match since then—until this week, and on Wimbledon’s grass he was looking entirely at home.

That soon became clear in a fast opening to the match. After an initial love hold from Federer, he faced 0-40 on serve courtesy of two errors and a double fault. He held, but he was under pressure. And in the sixth game, Hurkacz did break and consolidated for 5-2.

As anticipated, the Pole was serving big, keeping the ball low, and chasing to the net with alacrity. He lobbed, too, and deployed the drop shot. With a 130mph serve into the bargain, he served out the set, 6-3, in under half an hour.

The quiet and calm Hurkacz was apparently thrown not at all by the overwhelming support for Federer, which became chants at the change of ends. He was not fazed either by being broken in the second game, even via a double fault. Federer had to battle long and hard to hold, three break points, for 3-0, and then serving at 4-2, he could not control the returns coming at him, and the errors piled up.

Hurkacz got the break, playing near flawless tennis. When Federer worked an opening to get to the net, he was sound, and the crowds cheered every move forward, especially as it yielded him a love hold for 5-4. But this would head to a tie-break, with Federer continuing to look vulnerable in most parts of the court.

Sure enough, he netted his usually outstanding forehand time and again, missed a sitter of an overhead, and Hurkacz thumped down two great serves for the set, 7-6(4).

The third set went from bad to worse, with Federer mis-timing the ball, finding the net, and unable to pin the Pole back. Hurkacz continued to strike the ball with vim and accuracy, finding the corners even as Federer, broken twice in the set, tried to get on the board. The Centre Court roared Federer on to another effort as he left his chair for what looked like the last time.

A backhand wide, and it was match points to Hurkacz. A Swiss forehand went the same way, and it was game over, a shocking end to Federer’s run here, 6-0.

A roar went up as Federer left the court—would it be for the last time? For all the work it had taken to get back on his favourite stage, he may now question whether this is how he wants to play, how he wants to be remembered.

The eight-time champion was playing his 18th quarter-final on London’s lawns, and had notched up his 105th match-win here. But never before had he suffered a 6-0 set until this 22nd year at the All England Club.

For Hurkacz, of course, it was the moment of his life, a first Major semi-final, and against Wimbledon’s most illustrious champion. The Pole is a charming and quietly spoken man, who will surely garner many fans as he embarks on his semi-final against whichever man survived the battle on Ct1 that was just two sets old, one set apiece to Matteo Berrettini and Felix Auger-Aliassime after more than an hour and a half.

And Hurkacz was, as always, gracious and grateful to a shocked crowd, thanking them profusely for coming and for watching:

“I don’t know what to say—it’s super special for me on this court and against Roger… Super proud, super special…”

But the mood and the air around the emptying Centre Court was heavy with uncertainty and not a little gloom. Whether a fan of the Swiss star himself, or just an admirer of what he has done for his sport, it will be a bitter pill to swallow if he decides that there is more to life at 40 than returning to SW19.