It is Djokovic’s seventh Wimbledon title; Kyrgios’s opinion, “He is a bit of a god” 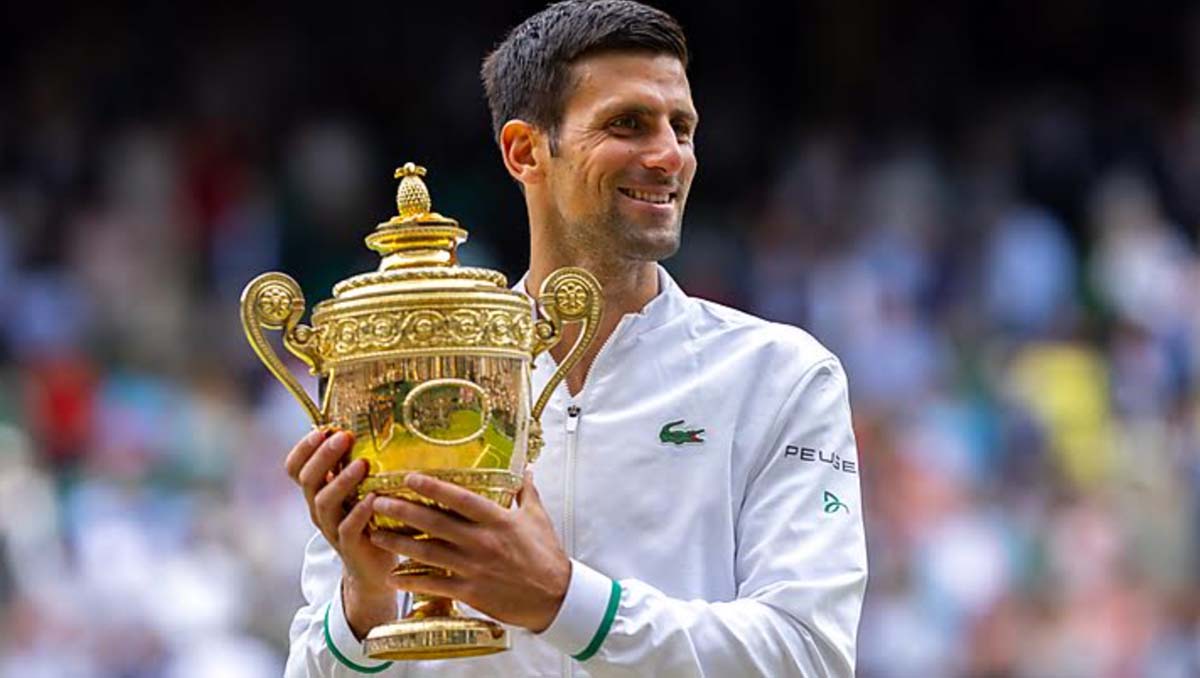 It had been a long while since the unpredictable Nick Kyrgios showed such consistent, determined, match-winning form at one of tennis’s Majors.

He was still a teenager when, on his debut appearance at Wimbledon, he reached the quarter-finals, and a star was born. There seemed, back then, no limit to where his tennis would take him, and surely a Major title beckoned.

Six months later, again before he turned 20, he did the same at his home Major in Australia, but Kyrgios’s mercurial temperament, and wavering love/hate relationship with tennis, ensured he would not fulfil all those expectations.

Three times in the eight years since he made the fourth round at a Major, yet there were regular reminders of what he could achieve: A final run at Cincinnati in 2017, two semis at the Miami Masters, two quarters at Indian Wells—notably all on hard courts, for as all fans of grass-court tennis know, there are no Masters events on Kyrgios’s favourite surface.

There had been titles, six of them from nine finals, but none since Washington in 2019. Yet come this summer, come that 2014 Kyrgios, first with some strong runs at Indian Wells and Miami, then with semis on the grass of both Stuttgart and Halle. By the time he reached his first final in three years, back at the All England Club, he had won nearly as many matches that he had played in the entire 2020 and 2021 seasons combined.

But compare and contrast with Kyrgios’s last opponent at Wimbledon, Novak Djokovic. The remarkable Serb, who this year reached a record 373 weeks at No1, had accumulated 87 titles, including 20 Majors, second only to Rafael Nadal’s 22. He had also accumulated a record 38 Masters titles, and by reaching this Wimbledon final, he took another record. It was his 32nd Major final—one more than Roger Federer’s tally.

At Wimbledon alone, Djokovic had won six titles, and was on an unbroken run on the courts at the All England Club since 2018—three straight titles, with a fourth just one match away.

Yet for all the 35-year-old’s records, achievements and experience, there remained one that was not in his favour. He had played Kyrgios twice before, and lost to him on both occasions.

How much stock either man put into this was hard to tell: both matches were on hard courts and a full five years ago. But one thing was certain: Djokovic would be mentally and tactically prepared to the nth degree to ensure that this outcome would be different. For he knew the danger:

“Actually, he’s a big-match player. If you see his career, the best tennis he’s played is always against the top guys. That’s why we all respect him, because we know what he can come up with…

“These are the occasions where he loves, where he thrives, in a big stage. So in a way it’s also not a surprise for me that he’s there.

“He’s got so much talent… but on and off the court, a lot of different things were distracting him and he was not being able to get this consistency. For the quality player that he is, this is where he needs to be, and he deserves to be.”

And he had put his finger on it: Sometimes the volatile, distracted tendencies of the Aussie got him into trouble—both with officials, fans, opponents and his own performances.

But at Wimbledon, when there had been signs of it happening again, he put his head down and worked it out: five sets in his opener against wild card Paul Jubb was a wake-up call; four sets against No4 seed Stefanos Tsitsipas tested his concentration; five sets against another surprise package Brandon Nakashima; He had come through them all, and then got an unexpected bonus—a walkover in the semis when Nadal withdrew.

Djokovic’s progress had not been seamless, either: Twice a set dropped to unseeded opponents; then his own wake-up call against No10 seed Jannik Sinner, fighting back from two sets to love down.

But after losing the opening set to Cameron Norrie in the semis, his tennis took on the look of the man who had been unbeaten here in 27 matches: It was blisteringly good.

It was, though, Kyrgios who got off to the faster side, unleashing the show-shots in his first service game, a second-serve ace, an underarm serve—which lost the point—and several drop-shot exchanges. But Djokovic had come to play, sharp and up-to-speed from the first point.

In the fourth game, Kyrgios did not waver from his 130mph serve, held to love, and then a couple of searing returns brought him the first break points. On the second one, Djokovic double faulted, and Kyrgios took first blood, and consolidated with a love hold.

Djokovic was not distracted, a love hold, acing and coming to the net himself. He held to love again when serving to save the set, and then pressed the Australian to deuce for the first time. Kyrgios missed a first match-point but two aces did the business, 6-4 in half an hour.

Djokovic, still calm and composed, opened the second with a quick love hold, and began to keep Kyrgios in a couple of arduous, long rallies—not a style of play the Aussie would favour against the endurance capabilities of Djokovic. Sure enough, the defending champion penetrated the Kyrgios attack, and a net-cord winner delivered a love break—the first he had ever achieved against the Aussie. Kyrgios pressed him to deuce, but Djokovic held for 4-1.

This time, then, it was Djokovic who served for the set, and now Kyrgios produced a couple of stunning hustles to earn break points, but could not convert four chances, as Djokovic ran his opponent to the very extremes of the court, and served it out, 6-3.

Kyrgios roared over and over, “0-40”, and yes, he should have converted one of those chances. He was livid, but had to regather himself if he was to outsmart Djokovic.

Kyrgios saved a break point in the very first game of the third, now failing to make as many free points on his serve. Djokovic’s pin-point strikes to corners and lines were meticulous, as was his serving.

The intensity, along with the quality, was rising, which seemed to galvanise Djokovic to the same extent that it distracted Kyrgios. A love hold from the Serb, and he was in cruise control, 4-4, throwing the pressure back on the Aussie, who was close to bursting point. A double fault, break point, an error, and Djokovic would serve for the set.

Kyrgios shouted relentlessly to his box, demanding more intensity from them, it seemed. All of which was music to Djokovic, who knew he had his man on the run, and served it out, 6-4.

Djokovic took a comfort break, leaving Kyrgios to stew, and his one-two plays on his return were clean and impenetrable. The Serb had only dropped two points on serve as he stood to the line at 4-5, and remained near flawless. He took it to a tie-break, and giving not an inch, served it out, 7-6(3), after exactly three hours.

These two have had an edgy relationship in the past, but now have nothing but respect for each other. Kyrgios, in accepting the runner-up trophy, turned and said:

“Yeah, he is a bit of a god, I’m not going to lie. I thought I played well! …You’ve won this Championships that many times I don’t even know any more.”

“I really respect you a lot, you are an amazing talent and now everything is starting to come together for you. I never thought I would say so many nice things about you considering the relationship. [Smiling] OK, it’s officially a bromance!”

Kyrgios would not commit to being back here for another try, but the way Djokovic played this match, there seems little doubt that there is still more to come. This is his seventh Wimbledon title, his 21st Major—now one ahead of Federer and one behind Nadal—and he is still performing at a peak level into his mid-30s. He is he second oldest winner here in the Open era, after Federer, but has now won more Majors since turning 30 than any of his rivals, nine of them.

Simply put, who knows when and where this story will end.