Kyrgios storms to first SW19 quarter-final since first as a teen in 2014; fellow non-seed Garin next 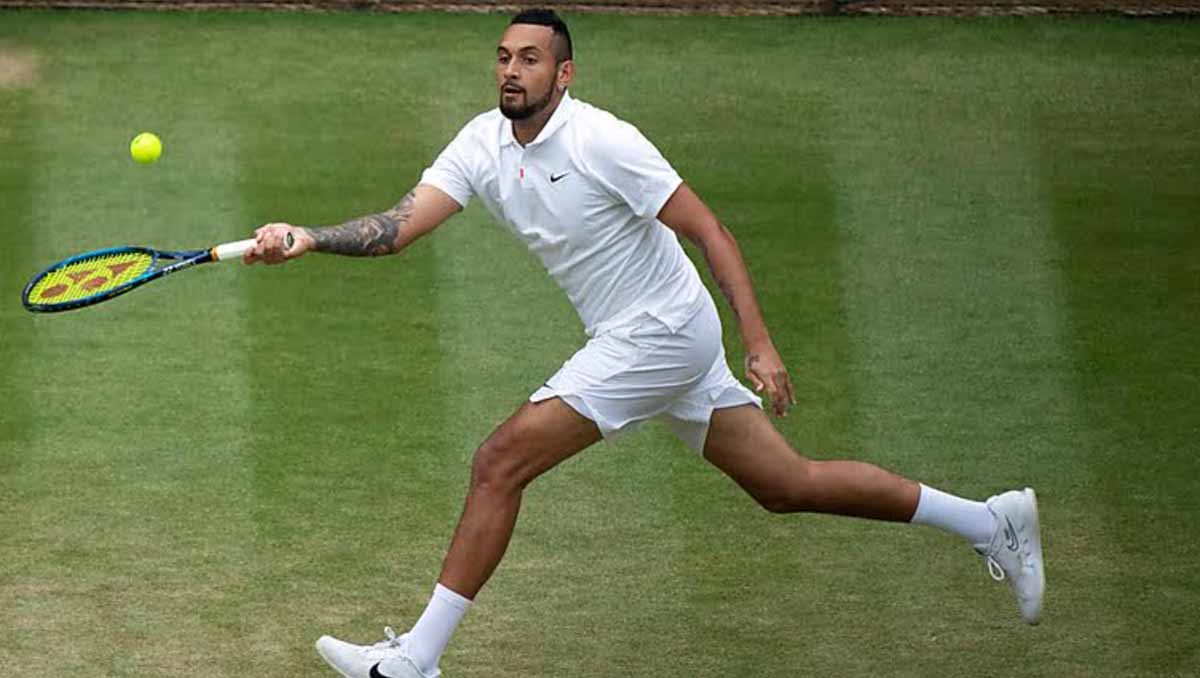 Maria Bouzkova, again, had progressed from a career-best Round 2 to the quarters to face the only woman in the bottom half of the draw to have reached this stage before, last year’s quarter-finalist and No3 seed, Ons Jabeur.

In the top half, Harmony Tan, winner over Serena Williams, was making her Wimbledon debut having won just a single Major match before. And even the woman she faced, No20 seed Amanda Anisimova, who was a French Open semi-finalist, had only reached the second round at Wimbledon before.

As for Elena Rybakina and Petra Martic, the winner of their contest would take either one of them past her career Wimbledon best to a first quarter-final here—and it was Rybakina, the No17 seed, who did so, 7-5, 6-3.

It was a similar story on the men’s side. Yes, defending champion and top seed Novak Djokovic had reached the quarters yet again, but his opponent, Tim van Rijthoven, had broken new ground in a big way: He had never won a Major match anywhere before.

It was Carlos Alcaraz’s ill fortune to meet an on-fire Jannik Sinner, with both young stars eyeing their best Wimbledon run by far: Sinner made the quarters having never won a match here before.

Then there was British hopeful, No9 seed Cam Norrie, now bearing the entire weight of home hopes after his 16 singles compatriots had failed to reach the quarters. He had made the third round at all the Majors, but this week marked the first fourth round—jumping to the still more significant quarters for a meeting with David Goffin.

Now it was the turn of the bottom half to break new ground. Of course, Rafael Nadal had been there, done that. Twice a champion here and a 22 Major champion, he took on another Dutchman, Botic van de Zandschulp, playing here for only the second time—though he arrived this year on a career-high No25.

No11 seed Taylor Fritz took on a qualifier ranked 99, Jason Kubler, who had won only two Major matches since his first appearance at his home Australian Open in 2010. But Fritz, too, was looking for his first ever Major quarter-final, and showed real determination in storming to a 6-3, 6-1 lead, and after tidy two hours, he sealed the quarters—on the fourth of July—6-4, with 40 winners.

And then there was Nick Kyrgios, an unpredictable but undeniable talent, unseeded but a former quarter-finalist way back as a teenager in 2014. He had already taken out No 26 seed Filip Krajinovic and then No4 seed Stefanos Tsitsipas, and now played Brandon Nakashima, age 20 and ranked 56, who was playing just his second Wimbledon: It had the makings of a one-sided affair.

Even fellow Aussie, the No19 seed Alex de Minaur, had only once made the third round here. He would face the unseeded Cristian Garin, playing in the fourth round for the second time: Again, each was after a first quarter-final at the All England Club.

These two had the earliest start, on Court 2, and de Minaur broke at the start to take a 2-0 lead, and ran out the winner of the set, 6-2, after 40 minutes. Garin was making too many errors, and was broken early in the second, too. He did level things again, but the Aussie broke to take the set, 7-5.

In what was becoming a tight tussle, there was another exchange of breaks in the third, but this time, the powerful Chilean took it to a tie-break, took a 6-3 lead, and finished it off with an overhead winner, 7-6(3). What is more, he broke early in the fourth, 3-1, and a second time as the de Minaur serve wavered. Garin served for the set, was promptly broken back, and then squandered set points on the Aussie’s serve. However, after almost three and a half hours, he served it out, 6-4.

They edged towards a tie-break in a nail-biter, Garin saving two match points in the ninth game, de Minaur fending off break point in the next. It would be another tie-break, with some energy-sapping, punishing rallies, before the Chilean closed it out, 7-6(6) after more than four and a half hours.

He is a charming, quietly spoken man, but his joy was clear:

“Wimbledon, I said this many times, is my favourite tournament. Every time that I play here is something special I feel. To be in the quarter-finals here is a dream.”

By now, Centre Court was abuzz with the first appearance this year by Kyrgios, though it was proving to be a quieter affair than his last match. Nakashima is a calm character, giving the Aussie little to feed off emotionally. They were all square for the first five games, but Kyrgios was massaging his right shoulder, and suddenly his forehand went AWOL in the 10th game. The American pounced and broke for the set, 6-4, and Kyrgios called the physio.

A couple of pain-killers later, he broke and went on to serve out the set, 6-4, but the physio was out again early in the third, pummelling the right shoulder. Even so, Kyrgios kept piling on the aces, and he won the tie-break, 7-6(2).

The American, though, was digging in well, and broke for a 4-3 lead in the fourth set, breaking again to take it, 6-3. But having let that last game slide, Kyrgios was back on the case, breaking twice for a 4-1 lead. He sealed the deal, 6-2, and for someone with a shoulder problem, his tally of 35 aces was outstanding.

He immediately paid tribute to his opponent:

“Hell of an effort from Brandon, he’s 20 years old and he’s going to do some special things that’s for sure. [I was] nowhere near my best performance, but I fought through; the crowd were amazing.”

He next plays fellow five-setter Garin for a place in his first Major semi-final, in his 30th Major appearance.

The highest profile women’s match of the day brought former champion Simona Halep face-to-face with the No4 seed Paula Badosa, who with Jabeur, was the only remaining top-10 woman in the draw. And the tall, powerful Spaniard was hoping to extend a personal milestone, too. She was a Roland Garros quarter-finalist but had only made the fourth round here, and matched that with her win over another former champion, Petra Kvitova, but could she do it again?

Perhaps surprisingly, Halep had only faced Badosa once before, and that was her win on Madrid’s clay this spring. But Halep seemed to be on a mission this year, and she broke quickly, 2-1. Another break to love and it was 4-1, a love hold, 5-1, and another—albeit tougher—break for the set, 6-1, in 22 minutes.

Now, though, battle was joined, both cranking up the noise and power in long baseline exchanges. Badosa found her range and worked a break point, but to no avail. Halep pressured in the fourth game, but the Spaniard finally broke the rhythm with a drop shot winner. It worked: 2-2.

However, Halep was too consistent and accurate, she broke in the fourth game, and consolidated to love for 5-2, making one final break, 6-2, in precisely one hour.

Anisimova, having halted the headline-making debut of Tan, 6-2, 6-3, was up next, while the unseeded Tomljanovic, matching her quarter-final run of last year with her three-set win over Alize Cornet, next faces Rybakina.