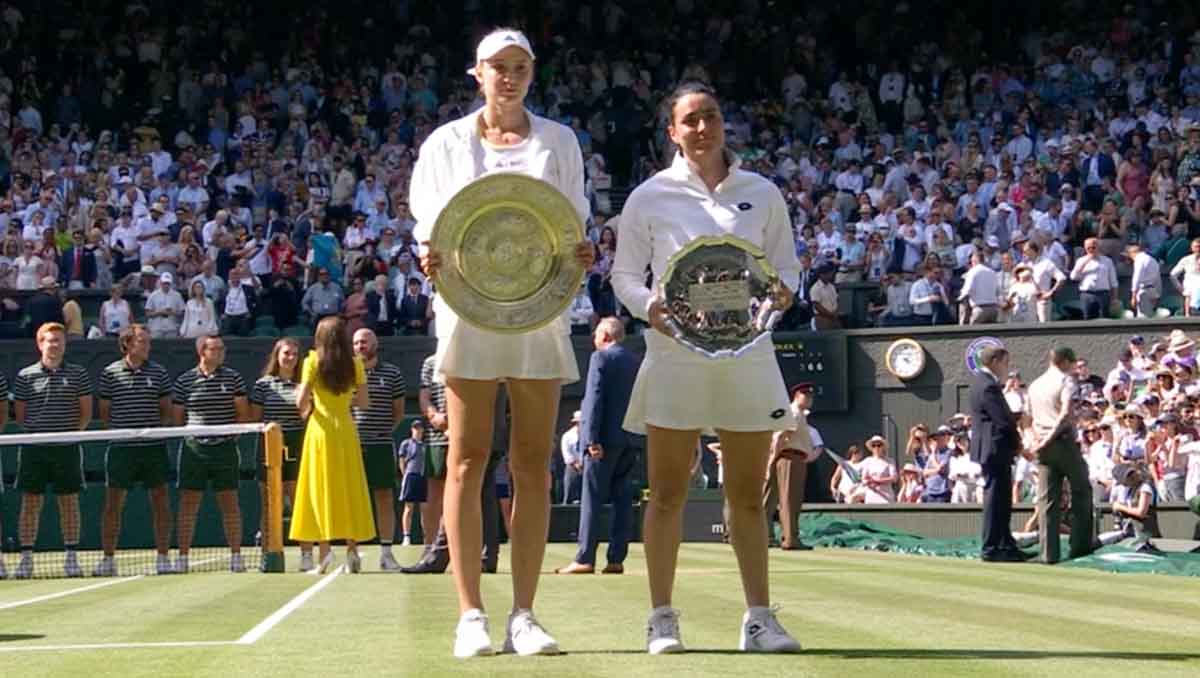 It has been an extraordinary and memorable women’s championship at Wimbledon this year, and one that seems to have enthused many new fans and admirers.

The world No1 Iga Swiatek had already captivated a new audience since taking on the No1 mantle of retiring Ash Barty in March: The 21-year-old Pole had not lost a match since—reaching 37 wins here last week.

There was the inspiring story of Tatjana Maria, here little more than year after giving birth to her second daughter, ranked 103, age 34, and now not only exceeding her best ever Major run—the third round in 2015—but making it all the way to the semis.

And while the home fans may have seen US Open champion Emma Raducanu fall at the second fence, there was Heather Watson putting her third-round blues to rest—and she had reached that stage three times at Wimbledon—to make the fourth round at a Major for the very first time after 12 years on the tour.

There were, too, several early exits by some of Wimbledon’s biggest names, notably wild card Serena Williams, who returned out of the blue for the first time since her painful opening exit here last year. The battle was outstanding, the winner Harmony Tan a breath of fresh air.

But perhaps the most compelling story, and player, to emerge from the women’s draw was No3 seed Ons Jabeur—though she was already world No2 in the rankings. She had won 22 of her past 24 matches, including the last 11, and stacked up 84 match-wins in the past two seasons, more than any other woman.

Her second and third titles came this year on the clay of the Madrid 1000 and then on the grass of the prestigious 500 in Berlin.

But it was also the nature of her tennis that appealed, a dancing combination of touch, craft and spin with power from the back of the court and on serve. What is more, her tactical prowess saw her often switch between shots and styles even with a point.

In the process, she had become an ambassador for Tunisia, and for Arab women—the first to reach the latter stages of a Major, let alone the final.

Arguably, though, it was her younger opponent, Elena Rybakina, who had made risen through the ranks sooner. She was still only 23, but before the Covid shut-down in 2020, she had won 20 of her first 25 matches and reached four finals, winning one of them.

She had added a fifth final by the end of 2020, and went on to make the quarters in both singles and doubles at the French Open last year. She also reached the fourth round in her debut Wimbledon appearance, so she was not unfamiliar with performing on the big stage.

And she cruised through the draw here, though had avoided seeds right up to Simona Halep in the semis. And if she had kept a low profile before then, her 6-3, 6-3 demolition of the former champion ensured her all-court power and tall, elegant presence were no longer in the shadows.

Her background, though, had drawn a different kind of headline, for Rybakina was born in Russia, but switched to Kazakhstan in 2018 to get the funding and support to succeed on the pro tour. And Wimbledon had banned all Russian and Belarusian players from the tournament, as part of the boycott against Russia for its invasion of Ukraine.

However, she had played for her adopted country for many years, and attempted to stave off any political mileage during the tournament. Should she go on to win Wimbledon, then, she would become Kazakhstan’s first Major singles champion.

The big-serving Rybakina won the toss, and to the surprise of no-one, opted to serve. Three big deliveries, three straight points, and a confidence-boosting hold.

Jabeur answer in kind, and then deployed her accurate slices from the baseline, defusing the power coming at her, and one such shot earned a first break and a huge roar.

She drew gasps, not for the first time, with a sliced drop-shot, backed up by a deft angled pass, and held for 3-1. She then had chances to break in the fifth game, too, but Rybakina held her off. Still the Tunisian, whose relatives had been unable to get visas to travel to watch her, would not be denied, and she broke for the first set, 6-3.

The more she dismantled the Kazakh’s power, the more mistakes Rybakina made: 17 in that half-hour set. However, Jabeur suddenly threw in a poor service game to open the second, and Rybakina converted her first break point of the match. Jabeur very nearly broke back, but the younger woman found three big serves to hold for 2-0.

The Kazakh now began to control the rallies, countering Jabeur’s tactics, and eating up the court to reach drop shots and make winning plays of her own. The Tunisian had to work hard to hold the third game, but having done so, turned on the heat to work three break chances in a long fourth game. However, Rybakina held, 3-1, and Jabeur became increasingly irritated with herself.

The Kazakh was beginning to apply her easy power to great effect, punching holes in the Jabeur games. She broke again, and served big to hold for 5-1, the calmest woman in the building. She went on to serve out the set, 6-2, now up to 24 winners.

And she continued the assault to break in the first game of the third. Rybakina even began using some of the same slicing shots and drops as her opponent, and the frustration in Jabeur’s body language was palpable. It was draining both her confidence and energy: Could she summon up a second wind?

Jabeur held serve twice, but now needed to break, and if the noise of the crowd had anything to do with it, she would. All at once, her drop shots began to work, and a winning lob brought up three chances, but huge serves and a bold volley winner from Rybakina wiped them out.

Not content with that, she broke the Tunisian again to serve for the title, and did so with remarkable composure, 6-2, showing barely a glimmer of emotion. Instead, all the emotion seemed to weigh on Jabeur’s shoulders as she sat, head in hands, by the court.

This was the first Wimbledon title match between first-time Major finalists in the Open Era, with both women creating new milestones for their respective nations. And the 23-year-old Rybakina also became the youngest woman to lift the Venus Rosewater Dish since 2011.

Suddenly, though, all her renowned composure disappeared in a cascade of thanks and dedications:

“I was super nervous before the match, during the match and I’m happy it’s finished to be honest. Really I have never felt something like this. I want to thank the crowd for the support, it was unbelievable these two weeks.

“But also I want to congratulate Ons for a great match and everything you have achieved. I think you are an inspiration for everybody. You have an amazing game. We don’t have someone like this on tour and it is a joy to play against you. Thank you so much. It is just an unbelievable atmosphere. Thank you.”

The final word, though, goes to the woman who has become one of the most admired and recognised at Wimbledon. Jabeur concluded:

“I love this tournament so much and I feel really sad, but I’m trying to inspire many generations from my country. I hope they are listening. I also want to thank his beautiful crowd for all their support over the two weeks. It’s been amazing.

“I want to wish Eid Mubarak to everyone celebrating.”

And with cheers echoing in her ears, she waved goodbye, but will be welcomed back with open arms again next summer.