The Greek admitted to the Court 1 crowd: “Even though I am not a Brit, I really felt the love” 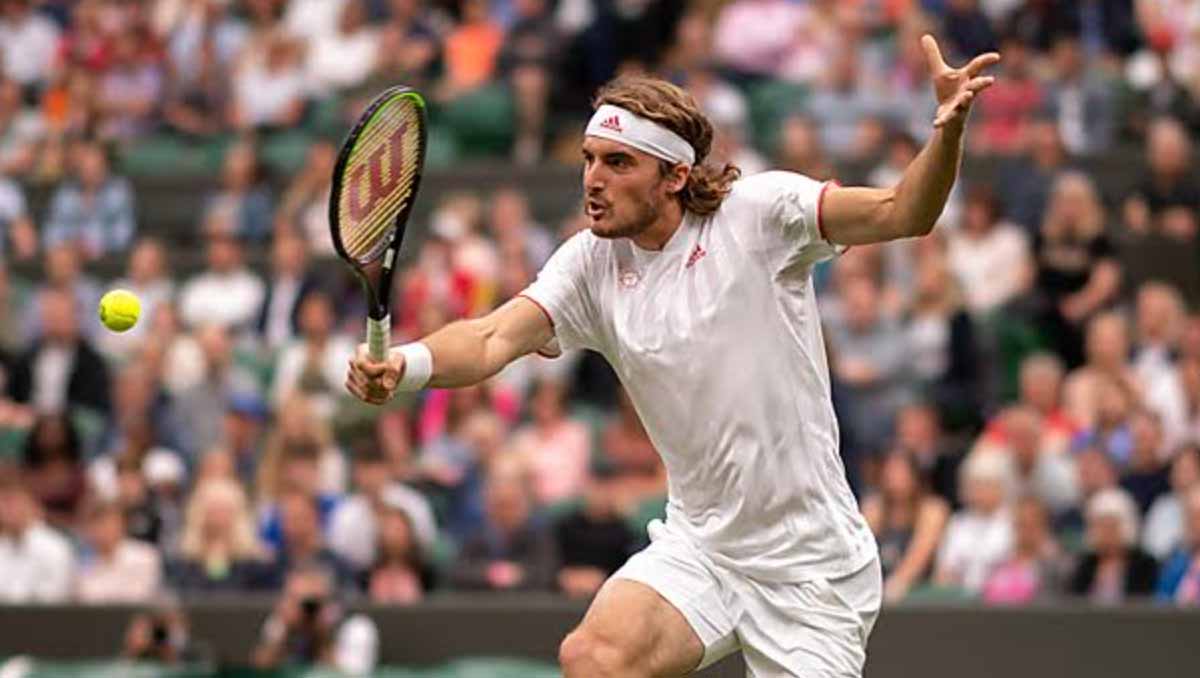 After top seed Djokovic swept with ease to the third round on Wednesday, the second seed, Rafael Nadal, would attempt to do the same.

Each of them had lost one set in their openers, but Djokovic had raised his level to concede only seven games against Thanasi Kokkinakis. Nadal took on the 106-ranked Ricardas Berankis, and would attempt to win his 16th straight Major match after taking the titles at both the Australian and French Opens.

Nadal headed a half that had certainly opened up to some new names, not least following the withdrawal of one of the favourites for the title, Matteo Berrettini, with a Covid infection. Soon after, another former finalist Marin Cilic, seeded 27, also withdrew with Covid, and ahead of the second round Roberto Bautista Agut went the same way.

Not that Djokovic’s half had been immune to losing seeds, with his quarter losing Reilly Opelka, plus unseeded Andy Murray and Stan Wawrinka. As for the other quarter, No3 seed Casper Ruud lost in the second round, while Grigor Dimitrov and Pablo Carreno Busta retired injured.

Meanwhile, the most tipped man from that quarter, No7 seed Hubert Hurkacz, lost a first-round thriller to Alejandro Davidovich Fokina, only for the Spaniard to lose his next five-setter courtesy of a penalty point on match-point.

All this meant that, while Djokovic and Nadal remained favourites to continue their pursuit of records here, there were some new names also ready to make a mark for themselves.

The first task for the bottom half, though, was to reach the third round. Could 21-year-old Jenson Brooksby take advantage of Berrettini’s absence? Could 23-year-old Denis Shapovalov come through to reach his second Wimbledon semi-final?

Then there were two Britons, Liam Broady taking on clay aficionado Diego Schwartzman, and 20-year-old Jack Draper against 23-year-old Alex de Minaur. Draper, whose recent strong grass form had taken him to the semis in Eastbourne, had won four Challengers this year, too, and he broke the top 100 for the first time.

In Nadal’s quarter, there was 24-year-old Taylor Fritz at a career high after winning Indian Wells and then Eastbourne. He was the only remaining seed in his eighth, and sealed the third round with a win over British wild card Alastair Gray. Here, too, was unseeded Cressy, making his own waves with his net-attacking game.

In this same Nadal quarter, there was also a Dutch player, No21 seed Botic van de Zandschulp, who aimed to join his unseeded compatriot Tim van Rijthoven in the third round. He had made the semis at Queen’s a fortnight ago, and did indeed advance after beating Finland’s Emil Ruusuvuori.

Topping the Berrettini quarter, and scheduled to meet Nadal in the semis, was No4 seed Stefanos Tsitsipas, a former junior No1, and already tipped for great things when he reached the fourth round here at the age of 19. Three times a semi-finalist at the Australian Open, a former runner-up at Roland Garros, he was yet to better that 2018 run here, even with the kind of all-court skills to make the most of grass.

Now he took on Jordan Thompson, and would do so under the Court 1 roof, closed just as they were due on court. Not that the sudden change in conditions seemed to have much impact on the tennis. Tsitsipas broke in the third game with a winning lob, 2-1, and broke again with a volley winner for 5-2.

This was hi-tempo tennis, and the closed roof only made the crack of ball on strings louder. The Greek served it out, 6-2, in half an hour, but the powerful Thompson took early control in the second set. A blistering forehand winner broke for 3-1, but Tsitsipas was playing aggressive, fluent tennis, willing to close in for smash finishes or play deft drop shots.

The Greek duly broke back, and broke again for 4-3. His response had been swift and powerful, another break for the set, 6-3.

There was little in it in third, both men digging in with powerful baseline rallies: It looked like a tie-break conclusion, but Tsitsipas all at once went 5-4, 40-0 up against the Thompson serve: three match points. The Aussie saved two, but a final forehand sent long brought an end, 7-5 to Tsitsipas, after two hours.

The delight of the packed court raised the roof, which in the event had not been needed. It would open for the next match. But that had not dampened the Greek’s tennis.

He addressed the crowd:

“It was a great match today. I got the crowd involved and even though I am not a Brit, I really felt the love from the crowd and that pushed me.

“Last year was a completely different story. I wasn’t really that involved with [my movement] behind the ball. It is great to see that evolution this year. I feel grass suits my game perfectly. I am happy when I see the level of tennis I played today.”

His two titles this year have been a Masters, in Monte-Carlo, and the Mallorca 250 on grass before coming to London, and he certainly looked comfortable on the surface in recording his 42nd win of the season.

However, he will have his work cut out if he is to equal that Wimbledon best fourth round: He next faces one of the most dangerous floaters in the draw, Nick Kyrgios. The unpredictable hot-and-cold brilliance of the Australian reached the quarters here back in 2014, at barely 20 years old. Yet he has made must one other Major quarter-final, in Australia in 2015.

The crowds love him, his feistiness, and his flamboyant style of play: the establishment less so. More to the point, he played one of the matches of the tournament, by any player, in beating No26 seed Filip Krajinovic, in under an hour and a half, for the loss of only six games. He hit 24 aces, made 49 winners, lost just three out of 40 first serves, and had the swagger that all tennis-watchers will recognise.

Kyrgios also happened to beat Tsitsipas in their recent meeting in Halle, his third win over the Greek. Tsitsipas paused and smiled when asked his views on their imminent meeting:

“I have great respect for his game, that he can utilise his talents. Really fight when he really wants to. It is going to be a challenging one on grass. He is a big opponent on this surface.”

Kyrgios was all business when he sat in front of the media—often not a comfortable place on either side, as he hinted:

“Today from the get-go, I just felt really good. From the back of the court I felt like I really returned well. I was just very just locked in from the get-go today. I just wanted to, I don’t know, just prove to people that, like, I’m really good. I feel like I just don’t have the respect sometimes, you know?”

Who the crowd—and it will surely be put on Centre Court—will support, who knows, but it promises to be blockbuster.

Wimbledon 2022: Milestone wins for Boulter and Broady, both into third round for first time