Women's Cricket World Cup: England knocked out of the Women's World Cup despite a 15-run victory over New Zealand 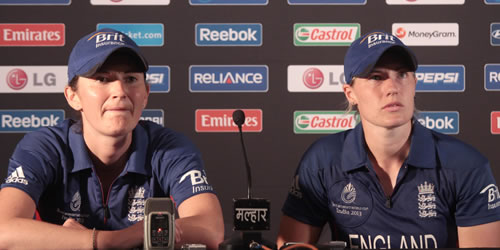 England were knocked out on Wednesday despite their win Photo: ICC/Solaris Images

England have been knocked out of the Women’s World Cup, despite a 15-run victory over New Zealand in Mumbai.

The defending champions posted 266-6 from their 50 overs and restricted New Zealand to 251-9.

England’s hopes of defending their title were dashed by West Indies, who defeated Australia to book their place in the final by finishing joint top of the Super Six table.

Taylor rocketed to 88 with an innings that included 16 boundaries and one maximum before being caught at mid-off by New Zealand captain Susie Bates in the 40th over.

England’s middle order accelerated in the last ten overs, with Jenny Gunn and Heather Knight adding 38 off the last 23 balls to finish on 23 and 28 not out respectively as England set New Zealand a target of 267 for victory.

After Taylor made an early stumping it was Gunn who made the breakthrough in the 30th over claiming the wicket of Bates (79).

“We are obviously bitterly disappointed and it was heart breaking to find out we were no longer competing for a place in the final when I was out in the middle, but I think credit has to be paid to both teams for continuing to play professionally from there on in,” Edwards said.

“The whole tournament has been a great advert for women’s cricket, all the teams are getting closer together and ultimately that’s where we want the game to be, but from a personal and team point of view I’m very disappointed.

“Sarah played fantastically today and showed she is a world class player; she really took the game away from them in that middle phase. Our bowlers put in another good performance as they have throughout the tournament and others stood up and contributed.

“We want to end out tournament on a high in the play-off match on Friday, it’s really important as it’s for rankings so we will be approaching it as we have all our other games in the tournament.”

England will play New Zealand in the third v fourth play-off match of the Women’s World Cup in Mumbai on Friday.