World Cup 2014: Why Colombia will topple Brazil – and more!

Barrie White reflects on the last-16 games and previews the quarter-finals, which start on Friday night 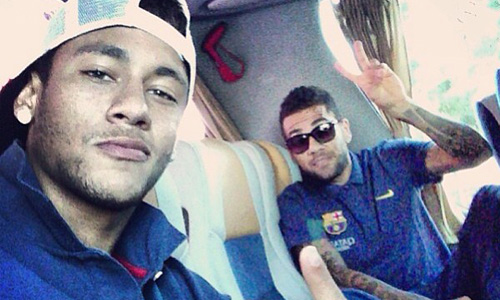 Can Neymar keep his cool against Colombia on Friday night? Photo: Neymar/Instagram

As you may have remembered, this correspondent predicted that the some of the World Cup last-16 games would be settled by penalties. Take my word for it, there’s no need to go back and check.

Ahem. There didn’t need to be any penalties because every team had such an attacking mind, when they needed it to happen. Even Greece.

Actually, the prediction of no penalties in the last 16 was doomed from the start with Greece in it.

However, Brazil and Chile was a surprise, but was anyone complaining that it did? We saw Neymar, in my very humblest of opinions, become a world superstar. The cojones, the balls – the sheer determination to score his penalty when others would have ran out of the stadium crying – was just exceptional.

The Kevin Pressman penalty from Chile equally so. Julio Cesar would be well-backed if he had gone back to the dressing room and told his mates ‘it was a goal or my head – fight another day and all that’ if Brazil had lost.

But while the love-in of the group stages was starting to wane, particularly during the attrition of Argentina and Switzerland, with some defensive football as sides began to trust the luck of the penalty lottery, along came Belgium against the USA.

Tim Howard we’ve covered here, as well as what Belgium have to offer. But what a game – what a game!
End-to-end as Belgium almost failed to see off Jurgen Klinsmann’s fighters. They were Rocky at the end of Rocky I (or Rocky, as it’s known).

They took everything thrown at them and came back for me. Bayern Munich youngster Julian Green gave the Americans hope of a double knockout with Apollo (stretching this now) with a late first-touch finish before Clint Dempsey couldn’t put away a fantastic free-kick routine not out-of-place if in a Hollywood film.

That was arguably game of the tournament, despite a lot of USA’s tactical inadequacies being shown up by Belgium, but the response in the USA was excellent. A return to the Americas in 2026 is likely.

But what of the quarter-finals you say, wanting me to move on. All eight group winners will fight it out, albeit with Costa Rica set to take on Holland, they’re not the group winners many were expecting.

Will they shock the Oranjemen? No. Holland look good and have three or four potential match-winners, certainly with Arjen Robben, Robin van Persie, and his good mate Klaas-Jan Huntelaar. On that, was Robin too sore to make the run down the touchline to celebrate with the Hunter?

Will the hosts make it through after their sapping win against Chile? No.

Colombia are the darling team currently and won their round of 16 match at a canter after two simply wonderful goals from James Rodriguez. His chest and volley is in my top five greatest ever goals.

Neymar is carrying injuries that can’t be shaken off, but more importantly, they will miss the quiet influence of the outstanding Luiz Gustavo from Wolfsburg, the dam against the tide of attacks.

However, the will of the Brazilian people can’t be discounted and they can give the players unknown levels of adrenaline to get through a tough game.

Germany and France. Too close to call. Unless Mats Hummels and Oliver Giroud play. Then very easy to call – Germany to win. A fourth straight semi-final and hopefully a few days off here!

Argentina and Belgium is again too close to call because without Lionel Messi, the South Americans wouldn’t be here, while the Premier League-heavy Red Devils were also taken through a very hard 120 minutes. Messi to shine? Probably, but he’ll have to do it more than once.

Liverpool should cash in on Luis Suarez, says former striker