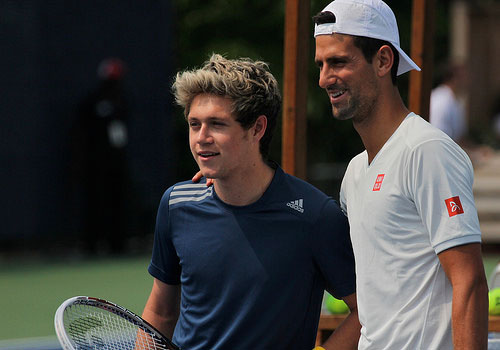 As world number one, Novak Djokovic is unlikely to have a shortage of willing hitting partners, but the Wimbledon champion welcomed a special guest last Friday.

The Serbian entertained crowds in Toronto as the six-time Major champion warmed up with One Direction singer Niall Horan, who is presumably bidding to end the Republic of Ireland’s search for a tennis star.

And Djokovic, who recently married long-term girlfriend Jelena, was clearly enjoying his hitting session with the young Irishman ahead of his bid to win the Rogers Cup this week.

“I got to practice this weekend with this guy. Some of you ladies might know him. His name is Niall and he’s in a band called One Direction. Ever heard of him?” Djokovic posted on his Facebook page.

The Irish musician was clearly thrilled too, posting on his Instagram: “”I was terrible! But was an amazing experience to play with the No. 1 tennis player in the world! Just incredible! Thank you to all of you guys, coz if it wasn’t for you, I wouldn’t be able to do amazing stuff like that.”