World Squash Championships 2012: James Willstrop and Nick Matthews face daunting competition if either is to claim the title 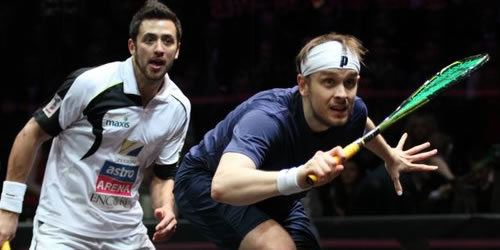 James Willstrop is the current world No1 Photo: Jordan Mansfield

It has been a year of wall-to-wall sporting success for the London 2012 home nation.

Sixty-three gold medals at the Olympics and Paralymics; Bradley Wiggins taking the Tour de France; Europe stealing the Ryder Cup; England beating the All Blacks; Andy Murray claiming the US Open; Alastair Cook reaching a 23rd Test century in pursuit of a rare England series win in India…the list is long and illustrious. But it could be inside a hi-tech glass box that the last world title of 2012 is won for GB.

The top ranked men in squash, and the top seeds at the last event of 2012—the PSA World Championships in Doha—are Britons James Willstrop and Nick Matthews, and the second of the duo is looking to defend the title he won in Rotterdam in 2011. Should he succeed, Matthews would become the first player since Pakistan’s renowned Jansher Khan to claim the trophy three times in a row.

He and Willstrop, though, face daunting competition if either is to claim the title along with the biggest purse in squash.

Their main challenge comes from the only other country to boast four top-10 players in the race to the World Series Finals—the equivalent of tennis’s World Tour Finals—in London. Leading that race is Ramy Ashour, World Champion in 2008, and behind the two Britons at No5 is Amr Shabana, Champion in 2003, 2005, 2007 and 2009.

Just as in tennis, the race rankings are built on results at key tournaments through the year, with the top tier—equivalent to the ATP Masters—being the World Series. And in the six of those played so far this year, Ashour, Willstrop and Matthews have filled all the final spots but one—with Ashour winning three of them.

The fourth man? Well he is ranked No3 in the world and No4 in the race, Frenchman Gregory Gaultier.

Perhaps it’s no surprise, then, that three of the four have also progressed to the semi-finals of the 64-man draw in Doha this week, nor that all four have already sealed their places at the World Series Finals.

And there are other things at stake as the men’s tour climaxes with its two biggest events of the year. Any of the top four could claim the No1 ranking at the start of the 2013 season—a position shared for the last 24 months by the two Britons.

Before that, there is the small question of the remaining four places at the World Series Finals, and the next four men in the race to London have gone a long way to consolidating their positions in Doha this week. Egyptians Shabani, Karim Darwish and Mohamed El Shorbagy reached the quarterfinals, though the eighth man, Briton Peter Barker, lost in the third round.

In the event, only one of them, El Shorbagy, has broken the stranglehold of the top quartet to make the semis, where he will meet Willstrop. The other semi is between Ashour and Matthew.

These are, then, exciting times for British squash—and the third-ranked woman is also a Briton, the 2011 Player of the Year Laura Massaro—all the more so because squash is aiming to win a particularly important prize in the coming year: acceptance into the Olympic fold.

Find out more about squash’s campaign for 2020 here.

Then see for yourself how squash has turned itself into a first-rate spectator sport by following Matthew’s and Willstrop’s campaign in the closing stages of the World Championships or by soaking up the atmosphere at London’s Queen’s Club, where hi-tech will meld with traditional to showcase the best eight men and women in the world at the ATCO PSA World Series Squash Finals, 2-6 January.

Two Brits in a nutshell

James Willstrop: world rank No1 (No2 in race)
Age 29, turned pro 2003
Titles: 16 from 32 finals
Highlights:
Three-time British Junior champion, plus European and World Junior Champion in 2002.
In 2004, won Pakistan Open title in first World Series final, and in 2005, won first World Series title at Qatar Classic.
In 2007, won English Open.
In 2008, runner-up at British Open for second time.
Ankle surgery in 2009 took him from No2 to No12 in rankings—returned to win his first Tournament of Champions in January 2010.
Took No1 ranking in January 2012 after closing 2011 with 15-match unbeaten run: Has held the top spot for whole year except February.
Won silver in mixed doubles in 2006 and silver singles in 2010 Commonwealth Games

Nick Matthew: world rank No2 (No3 in race)
Age 32, turned pro 1998
Titles: 25 from 50 finals
Highlights:
Won British Open in 2006 to become the first home winner for 67 years.
Came back from shoulder surgery to win British Open again in 2009.
Topped rankings for first time in June 2010.
December 2010, became first Brit in the tournament’s 35-year history to win World Championships.
Topped the rankings throughout 2011, and defended his world title in Rotterdam, the first player for 15 years to retain the title.
This year, won a record-equalling fourth British National title and, in May, became first home player to win the British Open for a third time.
Won gold in singles and doubles at 2010 Commonwealth Games