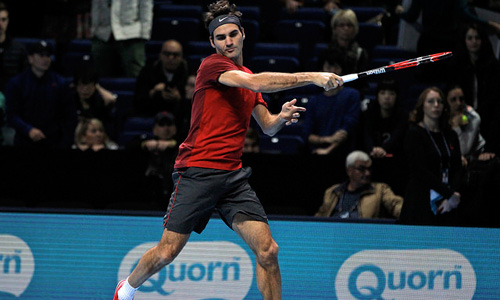 It is only one round into the season’s finale at the O2, just the third day of play, but already it is possible that Roger Federer or Kei Nishikori could seal their place in the semi-finals of the tour’s biggest and most prestigious indoor tournament—arguably the fifth Grand Slam of the year.

So convincing were the wins by the oldest and most experienced man in London—six-time champion Federer is here for the 13th consecutive time and has won more matches at the tournament than anyone else—and the second youngest first-timer—Nishikori is the first Asian to qualify for the tournament—that the winner of their second-round blockbuster could confirm a place among the final four by the end of the day.

The winner’s success would have to wait out the night match between the two men they beat on Day 1, but the question was, which of the two men separated by almost a decade in age would win what promised to be one of the liveliest, attacking all-court contests of the tournament? It was far from a foregone conclusion.

The light-footed, fast-moving talent of Nishikori had beaten Federer twice in their four meetings, most recently at the Miami Masters. And that was not all.

With his opening round-robin win over Andy Murray, Nishikori had now beaten 10 top-10 players this year, including every man but Tomas Berdych in London’s elite eight: Marin Cilic in Brisbane and Barcelona, and Milos Raonic, Stan Wawrinka and Novak Djokovic on his way to the US Open final. And Berdych? He beat him in their last meeting in 2012, the third time in four matches.

He had also won four titles, two of them 500s. Despite a smattering of injuries through this season and the last, he had notched up 53 match-wins to attain a career-high No5 ranking. In short, he was a growing force, and increasingly strong and confident under the guiding hand of Grand Slam champion Michael Chang.

“I think he has a wonderful backhand, one of the best in the game right now. He returns very well from it, moves well to it, he can generate pace, he can do it all.”

The Swiss, though, had also been enjoying a very fine season of five titles, a tour-leading 69 match-wins and barely a loss since falling in the final of Wimbledon.

It remained a very outside chance that he could clinch the year-end No1, but he had certainly made a case, following wins in Shanghai and Basel, for being one of the favourites for this Championship.

But he would have to be on his toes, take the initiative, and ensure his first serve was in fine working order to cut off the sharp, angled, clean hitting of the 24-year-old—and keep him pinned at the back of the court, for Nishikori, like Federer, has adept volley skills and great touch around the net.

And Federer faced a challenge right from the start, having to defend two break points in the third game. He made two aces in a row, held, and went after Nishikori in the next game. The attack was swift and sure, Federer chasing in when he could, but his reactions and resistance on his pummelled backhand wing, was solid. He broke for 3-1.

Nishikori’s full range of skills came into play in his attempt to break back—two fine lobs against the net-racing Swiss for 0-30, but Federer held again to keep his lead and take the set, 6-3.

Federer had managed only five points from 10 net approaches—a symptom of the court speed and also of Nishikori’s swiftness on return and lightning-quick strikes from the baseline. But the younger man needed a medical time out before the second set to re-strap his right wrist.

Both men opened the clean love holds, but then Nishikori’s serving level began to drop, and Federer broke in the third game.

Nishikori certainly didn’t back off, and tactically he kept Federer pinned back for much of the set. But the Swiss looked confident and quick from the baseline too, and broke through again to lead 5-2 when the Japanese man double faulted on his third break point.

There was a late flurry from Nishikori with a couple of terrific returns to lead 0-30 on Federer’s serve, and then his only break chance of the set. But Federer remained his calm and collected best to serve out the match, 6-2, in little more than an hour—and just 10 minutes longer than his first match.

He talked afterwards of Nishikori’s quality and of his anticipation of playing Murray in his final round-robin.

“Kei has shown how well he can play this year. I always thought he was a great talent, he’s very quick, has a great game and a great future. I think he can play better, but it’s an important victory in the group… I’m very pleased with my game today.

“I’m looking forward to playing Andy. We’ve got a very even head-to-head, we’ve played great matches—Olympic finals, Wimbledon finals. It’s always a pleasure playing against him. I don’t know if I’m going to be able to watch him tonight. I’ve got kids, and it’s during a time when I’m normally putting people to bed—but we’ll see!”

So Federer, father of four, is looking every inch the man with the best indoor career record on the tour, and a man revelling in his return from last year’s back problems and loss of confidence. He could be guaranteed his 12th semi-final at the tournament before bedtime—depending on the outcome of Murray against Raonic—but it’s now close to a cert that the oldest man among the elite eight will be plying his trade at the O2 come Saturday.