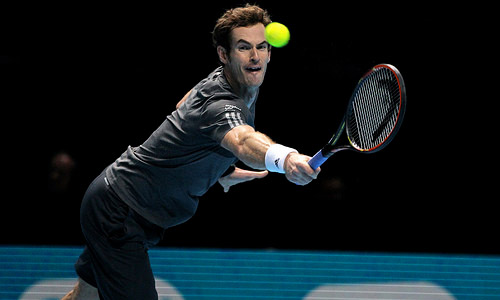 A gruelling, if rewarding, autumn season for Andy Murray was about to get still more demanding.

He arrived at the season’s finale in the city he calls home, at London’s O2 arena, having played six back-to-back weeks and tournaments to fight his way into qualification for the World Tour Finals for the seventh straight year—though he did not play in 2013 after having back surgery.

The effort paid off: He lifted his first title in 15 months in Shenzhen, and then won the Vienna and Valencia titles, too. That made 20 wins from 24 matches.

But if he was to get beyond the round-robin phase in London for the fourth time, he badly needed a victory over Milos Raonic after losing his opener to Kei Nishikori in straight sets. And his record against the 6ft 5in 23-year-old Canadian was far from ideal.

Raonic, making his debut at the Championships having reached a career-high No6 in the rankings this autumn, had beaten Murray three times in their previous four matches, most recently at Indian Wells this year. And in their last two matches, Raonic had come off the better in tough three-setters.

Murray was disappointed in his performance against Nishikori, just as Raonic was in his against Federer.

Murray remarked: “Obviously now I need to win my next two matches more than likely, and win them well if I want to go through. That’s going to be tricky because Milos obviously played fantastic last week in Paris, and Roger always plays well at this event. So I’m definitely going to have to play better if I want to get through.”

Raonic was clear about what he would need to do: “It’s obviously disappointing, very disappointing actually, the way I finished that second set off… [but] things are going to be quite different than the first match… It’s going to be about who necessarily adjusts better, who can play better come Tuesday night.”

As the youngest player among the elite eight—indeed the first player born in the 1990s to play the event—and working his way into a completely different kind of tournament, he too was up against it. Eleven of Murray’s 31 career titles had come indoors, the second best career record among active players, behind only Federer.

And when the big man’s serve is not firing on all cylinders, it affects his whole game.

In the first set, his first delivery rate was down at 38 per cent and he managed just one ace. He fought off break points in the fourth game but, opening with a double fault in the sixth, Murray took advantage and broke for a 4-2 lead. The Briton kept his advantage to claim the set, 6-3, in just 37 minutes.

The second set, though, was considerably closer, and bearing in mind that Raonic came back from a set down to win in Indian Wells, things looks a little edgy as the games unfolded.

Raonic was broken in third game, but broke Murray straight back. Both berated themselves, muttering at the baseline and at their chairs. But Raonic’s serve warmed up for a couple of games, holding firmly to love and then to 15 with a few deliveries at over 135mph. However, Murray lived with him.

Serving at 5-5, the young Canadian’s nerves surfaced again, 0-30, and a string of second serves gave Murray the opening he needed to break for a 6-5 lead. And that was all he needed to serve out the match, 7-5—but the two men ended their tussle separated by just four points out of 74.

It was a measure of Raonic’s nervous serving but also Murray’s great retrieving and defence, that the Canadian hit only four aces in the match, though he outstripped Murray in winners by a mile, 25 to 10. And all credit to the London debutant, in front of a vociferously Murray-biased crowd, that he played such an attacking game—but it produced 33 errors, and that was fatal. 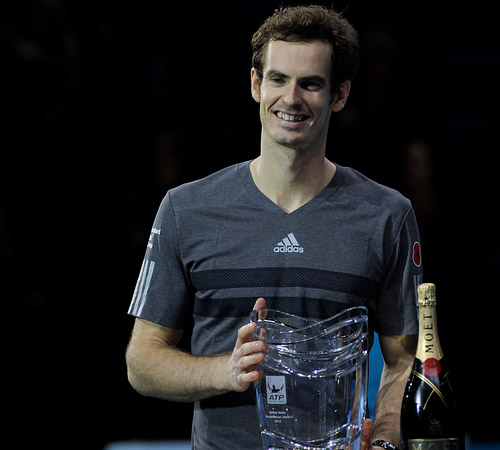 Now, though, as a smiling Murray said on court after his win, “I have an interesting match on Thursday—against Roger.”

If Federer wins, the Swiss tops his group and Murray will be nip and tuck with Nishikori for the second spot. If Murray wins, he and Federer can vie for top and second in the group—and that becomes important in determining their opponent in the semis.

So it’s still all to play for.

Footnote: Andy Murray was afterwards presented on court with the ATP’s 2014 Arthur Ashe Humanitarian Award, in recognition of his many off-court charitable activities, including numerous fund-raisers for the Royal Marsden and Cancer Research, as well as Unicef and Malaria No More. Read about the latest one here.