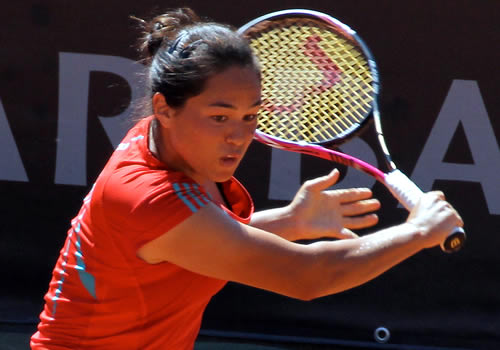 Caroline Wozniacki’s baron spell in 2013 was extended after the Dane was beaten by Jamie Hampton in the semi-finals of the Aegon International in Eastbourne.

In a match that consisted of a total of 14 breaks of serve, a single break by Hampton in the decider was enough to seal the shock victory.

Wozniacki said: “Obviously I would have loved to have to won today. It would have been worth it to be out there for three hours.

“I thought we played a very good match but the wind was there so it was so difficult.”

The Dane had her serve broken eight times alone as she struggled to combat the blustery conditions.

“The wind was swirling around and you didn’t have an idea if you were playing with the wind or against it because it was just going around and around.

“I haven’t seen the stats but I think I had a lot of high first-serve percentage and I thought I served really well,” she added: “It’s difficult in the wind and she returned well.

Wozniacki, who is currently ranked ninth in the world, has been unable to claim a tournament victory since lifting the Kremlin Cup in Moscow last October and will now turn her attention towards Wimbledon next week.

“I had my chances, I didn’t take them and she played very well I have to say,” she added.

“Overall I’m feeling good, I feel happy to be on grass. I feel like my game is where I want it to be.

“Hopefully at Wimbledon I’ll do well.”

Meanwhile, Hampton will play her maiden WTA singles final on Saturday, where she will face Elena Vesnina of Russia.