Simona Halep, Garbine Muguruza and more begin the race to the title and No1 in sizzling Singapore finale 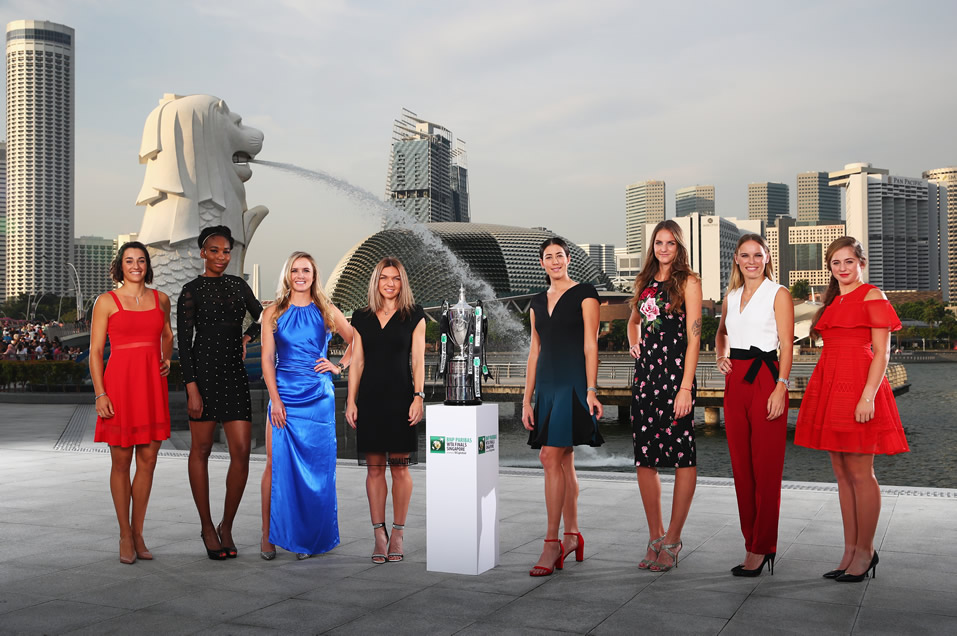 Twitter has been aflutter over the dramatically different line-up that is predicted for the ATP’s World Tour Finals next month—with just three of those who appeared in 2016 likely to do so again.

But the drama surrounding the women’s denouement is just as great—and then some. For not only are last year’s top two qualifying women, Angelique Kerber and Agnieszka Radwanska, plus the 2016 champion Dominika Cibulkova, all out of contention, they are not even sure of playing in the WTA Elite Trophy in Zhuhai.

Indeed only three of last year’s eight are in Singapore: Simona Halep, Karolina Pliskova and Garbine Muguruza. But there is an entire extra layer to the tournament this year: the No1 ranking.

For no fewer than seven of the eight contenders for the end-of-year trophy could leave Singapore as the world No1, from the current top player Halep through to No7 seed Jelena Ostapenko. There is a points gap of 1,165 points between these two, with 1,500 up for grabs in the coming week.

All of which means that every match through the round-robin phase of the tournament, when each woman has to play the other three in her pool, is vital not just in sealing a semi-final place but in building up her points.

It is, perhaps, a fitting conclusion to a season that has celebrated four different Major winners, ranging from the pregnant Serena Williams in Australia and second-time champion Garbine Muguruza at Wimbledon, to debutant winners Jelena Ostapenko at the French Open and Sloane Stephens, who had not played a match until Wimbledon after undergoing foot surgery, at the US Open.

The age range? Serena Williams was 35, Ostapenko barely 20. The ranking range? Williams was No2, and would regain the No1 spot after Melbourne—despite not playing another match this year—and Stephens was ranked No83 in New York, while Ostapenko was only No47 at Roland Garros.

And the WTA Finals have captured that same freshness, variety and range, with Venus Williams the only former end-of-season champion in the field.

There are three women making their debuts: along with Ostapenko are Elina Svitolina and Caroline Garcia.

The age-range of the eight goes from 20-year-old Ostapenko to 37-year-old Venus Williams, who is appearing in the tournament for the first time in eight years.

Three of them have risen to No1 for the first time since Wimbledon this year: Pliskova, Muguruza, and finally Halep making the top just a fortnight ago after falling painfully short half a dozen times this season.

So what else makes this year’s finale such a compelling competition?

· Venus Williams and Caroline Wozniacki are both appearing in the tournament for the fifth time;

· Ostapenko is the youngest qualifier since Wozniacki in 2010—both 20 years old;

· Garcia made the cut after a stunning late-season surge to win Wuhan and Beijing;

· Garcia played in the doubles field last year with Kristina Mladenovic—who is an alternate this year;

· Svitolina has won the most titles this year, five, has the best record against fellow top-10 players, 10-3, and the most top-five wins, 7-1;

· Wozniacki has also won 10 matches against top-10 opposition and has the most match-wins, 56-20;

But all the statistics in the world pale into insignificance alongside a No1 race that could go all the way to the wire.

Points of those in contention for No1 (max of 1,500 available in tournament)