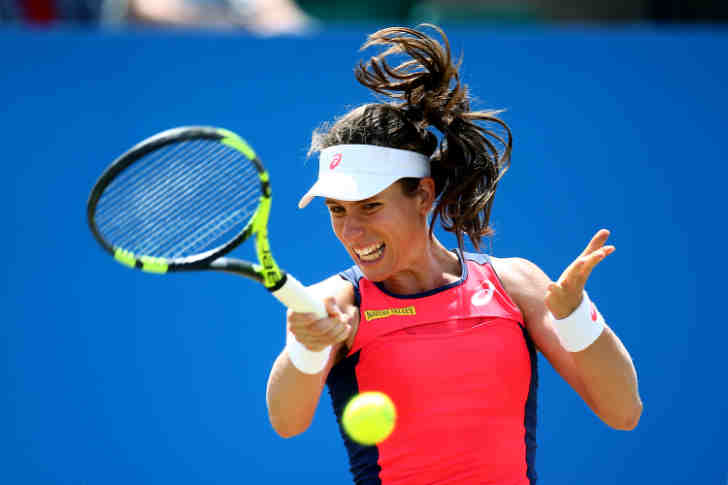 Johanna Konta has not qualified for the WTA Finals Photo: Getty Images for LTA

Johanna Konta must be feeling a certain sense of dejà vu as the women’s tennis season heads towards its climax in Singapore in just over a week’s time.

The Briton was last year poised to make her debut appearance at the WTA Finals after finishing runner-up at the Beijing Premier Mandatory before she was forced to withdraw from her second-round match in Hong Kong with an abdominal strain. She still made the trip to Singapore, only to see Svetlana Kuznetsova pip her to the post by winning the title in Moscow with just a couple of days to go.

This year, Konta seemed to be in a solid qualifying position as the Asian swing got under way, having risen to No4 after winning her first Premier Mandatory in Miami and then making her first semi-final at Wimbledon.

But she was unable to build on that success come the US Open, where she made a surprise first-round exit, and she failed to win a single match through Tokyo, Wuhan and Beijing. The reason became clear with her withdrawal from Hong Kong, citing a foot injury, and she has subsequently pulled out of Moscow too.

As a result, Konta could only look on as Caroline Garcia sealed the No8 spot for Singapore with her own late-season surge to the Wuhan and Beijing titles.

Even so, Konta sounded upbeat in her subsequent tweet yesterday. She said:

“I’ve needed to withdraw from Moscow. I am obviously sad that I couldn’t continue my battle to make it to Singapore, however, it’s massive congratulations to all the girls that have qualified.

“I am working hard to recover well and still make it to Singapore as an alternate and to be competing in Zhuhai.”

That last is a reference to the WTA Elite Trophy, which Konta went on to play for the first time last year as one of 11 players ranked from nine to 19.

However, the 23-year-old Garcia has put together a truly impressive six months during which her undoubted talent, combined with elegant athleticism, have produced the long-promised results. She put together an 11-match win streak through Wuhan and Beijing, and also reached her first Major quarter-final at Roland Garros in June.

Garcia said: “Qualifying for the WTA Finals means the world to me. I’m very proud to be among the top eight players of the season and I’m looking forward to being part of that incredible player field. To be the first Frenchwoman since Mauresmo in 2006 to qualify for the year-end finals makes it even more special.”

The top-ranked eight singles players and doubles teams compete for $7m and the Billie Jean King Trophy and the Martina Navratilova Trophy respectively.

Eleven players ranked from nine to 19 plus one wildcard have the chance to qualify for the Elite Trophy and a purse of $2.28m in the week after Singapore.