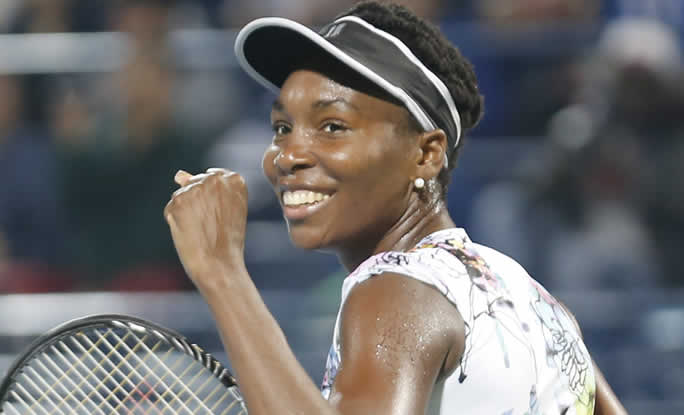 As the last four women standing in Singapore geared up for their respective show-downs, there was proven quality at every turn.

Three of them, Caroline Wozniacki, Venus Williams and Karolina Pliskova, had all been former No1s.

Williams was a seven-time Major champion, and despite her 37 years, was the only woman among the four to have made two Major finals this year. She was also the only one to have won this prestigious end-of-year trophy, almost a decade ago.

And while Wozniacki had not won in either arena, she had twice made Major finals and was runner-up in this event in 2010. She came into the tournament with more match-wins than any other woman and would reach 60 wins if she should go on to claim the title. She had also accumulated the most wins over top-10 players—up to 14 with the title.

Karolina Pliskova topped the four in titles in 2017, with three of them, and reached the final of the US Open last year. Playing in Singapore for only the second time, this was her first semi-final, topping out her group. Her fine form in the first half of the year took her to the top of the rankings after Wimbledon, too, and she was the only remaining player in Singapore who could deny the beaten Simona Halep the No1 ranking before the year was done: But she had to win.

And then there was the debutante in the pack, Caroline Garcia. The French woman’s journey to Singapore had been something of a fairy-tale already. She was the last woman to qualify after an impressive surge through Asia, where she won back-to-back Premier titles in Wuhan and Beijing, having arrived in Tokyo, where she made the quarters the week before, ranked No20.

She lost her opener in Singapore, but stayed alive with two fine come-back victories against Elina Svitolina and Wozniacki, and was then catapulted into top spot in her group with Svitolina’s defeat of Halep. She could not have hoped for more.

But could the fairy-tale continue all the way to the final?

First, though, came an intense two-hour contest between Wozniacki and Pliskova, their sixth of 2017. The latter had won three of those matches, all in straight sets, but the two won by the Dane, in Miami and Toronto, had been long and arduous three-setters.

The first set in Singapore suggested this would be another marathon. It lasted an hour and 23 minutes, saw both women broken on their way to a tie-break, and then face half-a-dozen set points before Wozniacki, having lost a 5-1 advantage, and then a 6-3 advantage, finally closed it out, 7-6(9).

Both women had hit more winners than errors, but Wozniacki’s precision, rhythm and energy resources ensured only nine unforced errors in the 121 points played.

And that took its toll on Pliskova, who now looked the more fatigued, and she lost her serve almost immediately. Not that the Czech lost focus: She fired off a return-of-serve winner to break straight back and then held to love. But Wozniacki, playing and serving aggressively, and seemingly as fresh as a daisy, got one more break, and served out the win, 6-3.

The victory had two big consequences. It took the Dane to the final here for only the second time, but it also ended Pliskova’s chances of regaining the No1 ranking.

Now came Garcia, who had to face the formidable Williams, and the American was playing the kind of tennis that had returned her to this elite tournament for the first time since 2009.

But just as they had each done in the round-robins, Williams and Garcia would provide the show-stopper of the day in an energy-sapping but thrilling three-setter packed with fine serving, bold shot-making, courageous net charges and body-sapping defence.

Garcia was the first to break for a 2-0 lead, and although Williams broke straight back, the French woman had the American on the ropes for much of the first set. But Williams dug deep, hustled and chased, and almost got a break at 5-5. Garcia had to produce some searing forehands to survive repeated deuces, and it went to a tie-break.

There, it was a tight Williams whose serve let her down, 0-3, and Garcia went on to edge the set, 7-6(3). But the American was not about to back off. She broke straight away and held to love, 3-0. And she went on to impose herself in a long eighth game to break again, 6-2.

Williams, serving first, rode that momentum with some extraordinary athleticism into the third set, and that left Garcia running to stand still as they headed to the eighth game. There, Williams broke, and despite herself facing break points, she served it out, 6-3, after two and a half hours.

So what does the mighty champion, who looked down and out in 2011 when diagnosed with Sjögren’s syndrome, have left in that 37-year-old body? It will need to be a lot, judging from Wozniacki’s physical resilience and form. The Dane has not beaten Williams in seven attempts, but then they have not played for two and a half years.

But make no mistake: if Williams can turn back the clock 10 years tomorrow, it is a victory that is likely to bring the roof down.

Halep to end year at No1

Simona Halep will be the 13th woman to achieve the year-end No1 singles ranking, and the first from Romania, since computer rankings were introduced in 1975.

She came into the WTA Finals as one of seven women who could claim the top spot, but her lead over the rest of the field ensured that, despite just one win to two losses in Singapore, she earned enough points to keep the No1 ranking that she sealed for the first time earlier this month.

Her fight to reach the top had many twists and turns, as she failed to seal the deal three times during the spring and summer. At Roland Garros, for example, victory over Jelena Ostapenko would have given her a first Major and the No1 ranking together.

But after repeated frustrations, her consistency got its reward. With the title in Madrid and runner-up runs in Paris, Rome and Cincinnati, it was her final finish in Beijing that took her to the top, and she is now assured of staying there until 2018.