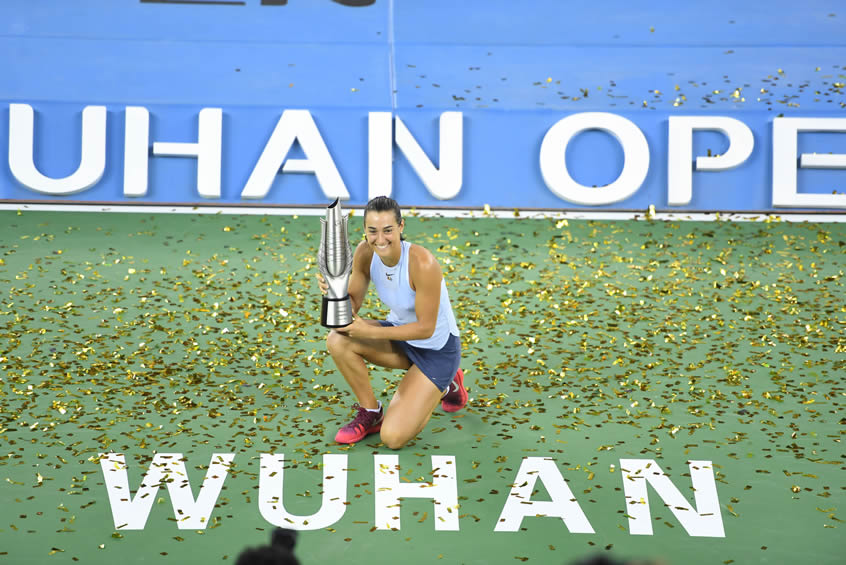 Caroline Garcia is through to the semi-finals in Singapore Photo: Wuhan Open

In Singapore, less than a week ago, there were eight, and now there are four. The best in women’s tennis have battled with each other through three matches apiece, and the quartet left standing are Karolina Pliskova, Caroline Wozniacki, Venus Williams and Caroline Garcia.

Less than a week ago, there were seven, and now there are two. Seven of the eight qualifiers for the WTA Finals this year could end the tournament as world No1, but now that opportunity had come down to current No1 Simona Halep and the woman who spent just a few weeks at the top after Wimbledon this year, Pliskova.

Yes, a lot of water has passed under the bridge in the last six days, and most of the contestants—all bar Pliskova and Wozniacki—had no certainty over whether they would even make the semis come Saturday.

The Pliskova form was hot from the get-go, and she sealed the top spot in the White Group after just two matches. Just as well: she was bundled out of a third win by Jelena Ostapenko in short order, 6-3, 6-1.

If the form of Pliskova had been good, however, that of Wozniacki had been sizzling. After conceding only two games to Elina Svitolina in their opening Red-Group match, 6-2, 6-0, in under an hour, she dealt out a similar treatment to Halep, 6-0, 6-2, and in only 63 minutes.

A former No1 herself, the Dane was thus assured of making the semis, but uncertain whether it would be in top place or second: That, and the fate of Halep, Svitolina and Garcia, all came down to the last day of round-robin action.

The French woman’s journey to Singapore had been a near fairy-tale already. She was the last woman to qualify after an impressive surge through Asia, where she picked up back-to-back Premier titles in Wuhan and Beijing, having arrived in Tokyo, where she made the quarters the week before, ranked No20.

She lost her opening match to Halep, and then looked overcome by emotion and nerves at a set and a break down against Svitolina after failing to convert set points in the preceding tie-break.

From there, however, she went on a four-game run to 5-2 and served out the set, 6-3, having regained her free-hitting, uninhibited tennis. A long and compelling third set saw her break to level at 5-5, and go on to seal the win, 7-5.

Yet she still had to come back and win another match—and even that would not guarantee the semi-finals. And Wozniacki looked impregnable in the early stages, serving superbly, taking the attack to the French woman, and winning a crushing opener, 6-0, in 23 minutes. She had 24 points to seven from Garcia, and made only one unforced error.

She won the first game in the second set, too, and as Garcia loosened and fought back, Wozniacki saved two break points in the third game to hold. But her composure was dented, and Garcia broke at the next opportunity, and again for 5-2. The elegant, attacking Garcia lost focus for a moment—enough for Wozniacki to grab a break back— but it was only a moment: Another French break and she was level, 6-3.

The resilient, super-fit Wozniacki soon wrenched control in the third, breaking for 2-1 and surviving what looked like decisive break points for 4-2. It seemed to matter not what Garcia threw at her—and she did attack the Dane’s serve, came to the net, fired freely down the lines—Wozniacki’s defence was up to the test. The Dane lifted a superb winning lob at 30-30 in the eighth game, held, and served for the set at 5-4.

But Garcia was not done, and broke at the third time of asking to level the score. Even so, facing 0-40, it looked as though the effort had been for nought—until she reeled off five points to take the lead, 6-5, and rode her momentum to one more vital break, 7-5.

Garcia had done all she could: now her fate was in the hands of the woman she had put to the sword two days ago, Svitolina. Sure enough, the 23-year-old from the Ukraine did Garcia the biggest favour in tennis.

Certainly the world No4 had points and dollars to earn even if she could not make the semis, but this brutal conclusion in Singapore for Halep, 6-3, 6-4, catapulted Garcia to the top of her group, and a meeting with Williams.

The fairy-tale for Garcia, then, continues. And as Svitolina pointed out when asked what reward she anticipated as thanks: “I expect more than just a drink!”

Wozniacki, as second in her group, will face Pliskova at 4pm local time tomorrow. Garcia and Williams will play at 7.30pm local time.

End of year No1