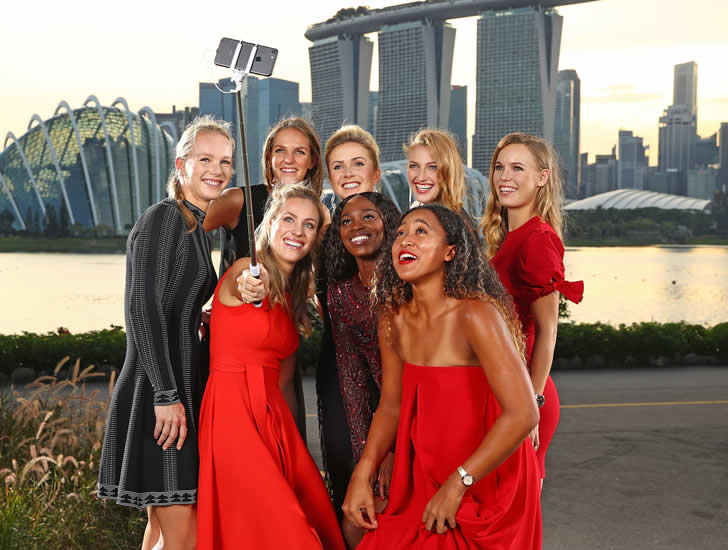 As the closing fortnight of the women’s tennis season heads to its finale, the best eight players in the world—plus two alternates—have taken up residence in Singapore to battle for one of the most prestigious titles in their sport: the BNP Paribas WTA Finals.

Sadly, despite sealing the year-end No1 ranking this week, Simona Halep is missing from their number. After a fine first half of the season, she carried a back injury into her opening loss at the Wuhan Open, and was then forced to retire in the first round in Beijing, revealing that she had a herniated disc in her back. She then had to withdraw from the Kremlin Cup in Moscow this week, and finally threw in the towel for the glittering but gruelling climax to the year.

However, the mix of old hands and new faces for the final playing of the tournament in Singapore promises star power and thrilling tennis.

Top seed and Wimbledon champion Angelique Kerber has been drawn into the same group as three women making their debuts: US Open and Indian Wells champion Naomi Osaka; last year’s US Open champion and winner in Miami this year, Sloane Stephens; and champion in Charleston, Cincinnati and Seoul, Kiki Bertens.

The No2 seed, Caroline Wozniacki, defending Singapore champion and winner of the first Major of the year in Australia, heads a group packed with experience: fellow former champion Petra Kvitova, winner of five titles this year; Elina Svitolina, who won in Brisbane, Dubai and Rome; and former No1, Karolina Pliskova, winner in Stuttgart and Tokyo.

The tournament, which is held at the Singapore Sports Hub from between 21 and 28 October, offers a purse of $7 million in prize money.

The singles players compete in a round-robin format, and the top two from each group advance to knock-out semis and final, in pursuit of the Billie Jean King Trophy. The doubles teams compete in a knock-out format for the Martina Navratilova Trophy.

Players and their draws: singles

NB Sloane Stephens has a combined 6-1 record over the rest of the Red Group. Petra Kvitova has a combined 18-6 record against the White Group. All other players have neutral or losing records.

Players and their draws: doubles

· Thursday to Saturday, doubles matches join the schedule: one singles and one doubles match in each afternoon and evening session: semi-finals played Saturday