WTA Rome 2013: Laura Robson beats former world No1 Venus Williams 6-3 6-2 to reach the second round in the Italian capital 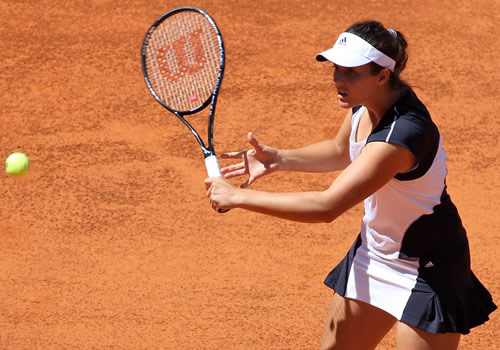 There could be few more daunting prospects for any player than taking on not one but two Williams sisters on a tennis court. Yet that was the prospect that faced the youngest woman in the Rome Premier draw, Briton Laura Robson.

As if a first-round match against the elder Venus was not enough, a win would send her into the clutches of Serena, fresh from defending her title and her No1 standing in Madrid.

But her reaction when she saw the draw? “I was pretty pumped!”

The reason was simple. Robson recollected, aged around 10, seeing Venus play Wimbledon: “I was blown away by how hard she hit the ball.”

And Robson is not one to put opponents on a pedestal. She has made a habit of picking the hardest route through the toughest tournaments, and despite some see-sawing form since she broke into the top 50 for the first time this season, she has developed something of a reputation as a giant-killer.

Robson may have fallen in the first round, and usually to lower-ranked opponents, six times this year, but at the Australian Open, she knocked out former Wimbledon champion Petra Kvitova, 11-9, in the third set, and last week in Madrid, she beat No4 seed Agnieszka Radwanska for the loss of just four games. She very nearly took out former French Open champion Ana Ivanovic in the next round, too, finally losing a third-set tie-break.

Go back to last year, and Robson beat two Grand Slam champions back-to-back at the US Open: Kim Clijsters and Na Li. Then at the 2012 Olympics, she pushed Sharapova to a first-set tie-break, as she had done as a 17-year-old at the 2011 Wimbledon.

But here, Robson’s first time in Rome, she could face two Williams who had each won this tournament before and who stood at two and three on the list of active clay-court title-winners. And yet…

In taking on the oldest woman in the draw—seven-time Grand Slam champion Venus is now 32—there seemed a very real prospect of an upset to the ‘old order’. Williams has fought back into the top 30 in the face of the debilitating Sjögren’s syndrome, and although she reached the semis in Charleston, she pulled out of Madrid with a lower back injury.

So the calm and coachless Robson strode into her first match at the Foro Italico for her first taste of its gladiatorial Centre Court.

The crowd may have been thin but the sun was hot and the sky blue. There was just one problem—on top of the occasion and the opponent: The Roman wind had got up, throwing terracotta clouds into the faces of the two women, and it was—certainly in the early stages—almost impossible for either to get any rhythm or build any rallies.

Points were decided in two or three strokes, with both hitting double faults in their first games.

The pauses were long, the frustration tangible, as each turned their back to the wind, wiped grit from their eyes, waited for stray rubbish to be caught, and struggled with erratic trajectories and bounces. It took 11 minutes to play two games, and with barely a rally in sight.

Robson defended a break point in her opening game, but then it was Williams’ turn after Robson hit a scorching cross-court forehand, and the Briton quickly converted the second. She went on to strike home her advantage with a love hold to take a 3-1 lead.

She was not done there, either. In the fifth game, she leapt on Williams’ serve to make a backhand winner, and with her opponent clearly the less settled of the two, Williams double faulted for another break.

Robson’s progress looked less certain as she faced down three break points in the sixth game, but she held to lead, 5-1. She again sailed close to the wind at 5-2, serving a 104mph ace one minute and a double fault the next. Williams did break, but it was not enough to stop Robson taking the set, 6-3.

Fortunately for all concerned—and the umpire fought with the wind to be heard on the microphone while the scoreboard gantry rattled above the spectators heads—the wind eased just a little for the second set and, with the court well watered, both women were able to build a few rallies.

Robson began to find more rhythm on her serve, opened with a strong hold, won her second service game with a forehand winner down the line, and broke Williams in the fourth.

Soon she was 5-1 up, but the former champion’s fighting instinct once more came to the fore. Williams fought through break points to hold and then pulled one break back—just as in the first set—but she could not hold off Robson. With a break, and a 6-2 set, the Briton had done it again: slain one of the giants of the game.

She recalled afterwards—with a somewhat embarrassed laugh—what she had said at 14: “I remember saying that I wanted to play Venus, and I got my wish…In fact I’m pretty sure I said I would take her down!”

Her mother, as mothers do, reminded her of those words when the Rome draw came out… “as if I could forget saying something so stupid!”

So one Williams down, one to go—and an altogether bigger test. For as Robson pointed out: “She’s playing pretty much the best tennis of her life right now.”

But Serena has played a lot of tennis and has won a lot of matches this season. She appeared on the Rome practice courts, so different from the Madrid ones, fewer than 24 hours after lifting her trophy in Spain.

So as is always the case, the giant-killing Robson will not be in awe: “I’m going to go out there with nothing to lose.”

It will be worth watching.