WTA Rome 2013 preview: Serena Williams and Maria Sharapova are the women to beat heading into this week's tournament in Italy 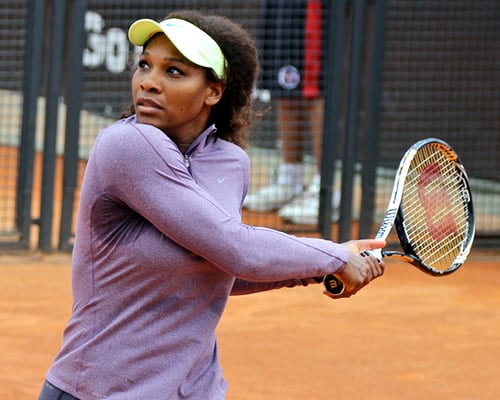 The men’s tour has grown used to the ‘big four’ leading the way at almost every big tournament: Roger Federer, Rafael Nadal, Novak Djokovic and Andy Murray have won all but one of the last 32 Majors: that’s eight years. But the women’s tour has shown rather more fluidity: 13 champions through the same eight years.

However, a constant has been the presence of two women—perhaps the most popular, widely known in any sport: Serena Williams and Maria Sharapova.

They first faced one another across a net in the year that Sharapova won her first Major—which was five years after Williams had won her first. It was 2004, and they have since played 14 times more, most recently this weekend in Madrid. It was Sharapova’s 50th final, but as so often in their story, Williams triumphed to take her 50th WTA title, while Sharapova comes to Rome still with 29.

But their dominance has been played out this season in more graphic form: Williams and Sharapova were also contesting the No1 ranking in Madrid, and by winning, Williams has assured the prime spot through to the French Open.

So there, as in Rome this week, ‘the two’ will top and tail the draw, but where last week it was Williams defending her Madrid title, this week it is Sharapova trying to claim her third consecutive Roman title.

What is also remarkable about these two women is that, despite having just one French Open title apiece, they are joint third among active players for clay titles: each with seven. And until the final in Madrid, they were also level in clay-court wins since the start of last year, but now Williams has a single match advantage: 28-1 compared with Sharapova’s 27-2.

As if more proof was needed of the durability of ‘the two’, despite repeated injury and illness over the years, Madrid marked a couple more milestones. Williams, in beating Sara Errani in the semis, became the first player this year to reach 30 match wins—and incidentally, the two of them were all square before the match.

Sharapova, meanwhile, managed an even bigger milestone in winning her semi against Ana Ivanovic: her 500th career match-win.

There are, though, other Rome champions in the field, as well as a slew of French Open champions and finalists, who may fancy their chances if “the two” come to Rome tired, as they might. Ivanovic, Errani and Francesca Schiavone lurk in Sharapova’s half while Na Li, Jelena Jankovic, and Svetlana Kuznetsova lie in the Williams half.

Can they, or any of the younger stars, break the Williams—Sharapova stranglehold?

For Williams, one of her biggest hurdles may come in her first match—the winner between one of the giant-killers of the last 12 months, Briton Laura Robson, or Serena’s sister Venus—one of the two women on that list of clay-court title winners who stands above Williams.

Robson took out fourth seed Agnieszka Radwanska in Madrid, and almost did the same to Ivanovic, to pull herself out of a slump that has seen her win just two matches in her previous seven tournaments. Before that dip, Robson dispensed with Petra Kvitova in the Australian Open, and in last year’s US Open it was Li and Kim Clijsters—and she is still, at 19, the youngest woman in the draw. In Rome, against Venus, she will play the oldest—and could well cause an upset. But two Williams in a row?

In the third round, Serena could meet the woman who made a run to Madrid’s quarters this week, Ekaterina Makarova, or Dominika Cibulkova, who took the top seed to three sets in Miami this year.

The seeds lined up for the quarters are big-hitting Nadia Petrova—Williams beat her in Rome last year—and Angelique Kerber, who beat Williams in Cincinnati.

If Li makes it through the bottom quarter, she would set up the all-31-year-old semi-final that was scheduled in Rome last year until Williams pulled out injured. Their record does not work in Li’s favour, though the Chinese woman’s flowering on clay in 2011 and her Rome final last year—as well as her form this year—suggest she should get past Jankovic or Caroline Wozniacki in the third round.

Li ought to meet Radwanska in the quarters—which has the makings of a high-quality contest—but the No4 seed has the prospect of Kuznetsova in the second round, a player against whom she holds a 3-10 head-to-head.

Sharapova’s run to the quarters looks relatively trouble-free, with one of two qualifiers in their first match followed by, possibly, a huge home favourite in the shape of either Schiavone or Flavia Pennetta. An alternative match, should the Italians fail to progress, could be an interesting first-time meet between young risers Sloane Stephens and Kiki Bertens.

Sharapova is most likely, in the quarters, to face the woman she dismissed in last year’s French Open final, yet another popular Italian, Errani.

Azarenka, the world No1 at the start of the year but now down to No3, is still working to regain her form after an ankle injury took her off the tour from Indian Wells until Madrid. She played two hard matches this week, but how match-fit she is for the rather different conditions of Rome is still unclear. She readily admitted ahead of her opener, a test against Julia Goerges, that she was not yet playing her best, and red clay is far from being her most successful surface.

In that context, her draw continues to be testing. The third round possibly holds Ivanovic and the quarters either Sam Stosur or Petra Kvitova—though Sabine Lisicki could cause an upset to both on current form.

Should Nos2 and 3 meet, however, it could show just how wide—or narrow—the gap is between “the two” and the best of the rest. On last year’s form, when Azarenka beat Sharapova in four out of six meetings, and if Azarenka is back to full fitness, that gap may become just a bit smaller as they all head through the coming pair of Grand Slams.