WTA Rome 2013: Britain's Laura Robson is beaten in straight sets by world No1 Serena Williams in the second round in Italy 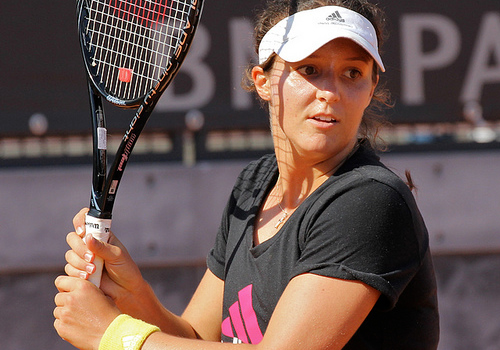 The day that Laura Robson put out Venus Williams in the first round of the Internazionali BNL d’Italia, the younger Williams sister Serena had some very warm words about the British teenager.

“She has a great game and is really young and just free and looks great on the court and so smooth,” she said. “And she is a leftie and this adds a notch to her level. She’s a great girl and it’s good to see her.”

Robson has made such a habit of taking out big names in big tournaments that Serena may have sought some advice from her vanquished sister, but there was little time for such things.

Serena was newly in from Madrid, having beaten Maria Sharapova handily in the final there, and was on the Rome practice courts in the blink of an eye. Perhaps she would be tired after her long and successful spring; perhaps she would need a little longer than the 24 hours the schedulers allowed her to manage the transition from clay at altitude to clay at sea-level

It certainly looked as though that combination of factors would play in Robson’s favour as the Briton came out with all guns firing to break Williams’ opening service game.

But Williams, it seemed, was just getting her Rome legs. She broke back and then held to wrench the lead back, 2-1. She pressured Robson again in the fourth game, jumping on the Briton’s serve to break and again hold to love.

It was now 4-1, and Robson called her temporary coach—despite expressing reluctance to do so when she talked of on-court coaching at her news conference—for a quick chat courtside.

Whatever he said, it worked and Robson held her next serve to love, but that would be it for the first set: Williams powered to 6-2 in 33 minutes. The story was written in the stats: Robson won just a single point out of 10 on her second serve.

Robson almost repeated her first-set opening, taking Williams to deuce, but this time a sharper-focused Williams held firm. Robson then had to dig deep to fend off break points in the second game but did so, and although Williams seemed to have greater penetration in her shots, taking them from inside the baseline, Robson stayed with her to force a bold break back.

It was Williams who now had to dig deep, facing 30-30 on her serve, and a huge “Come on” as she got to 40-30, showed her effort. She then saw a huge forehand return of serve from Robson flash past her for deuce. Next it was a cross-court forehand that beat Williams for break point: She saved it with an ace. Again the Robson forehand flashed past for another break point, so Williams changed tactics, going for angled ground stokes rather than trying to power through the court. It drew the errors she wanted and she held.

Robson’s resistance was broken, as was her serve in the sixth game, and serving to save the set, Williams worked another break chance with the most inspired of drop shots. A double fault later from Robson and the match was done, 6-2, in 75 minutes. But it had been a real test, and it drew encouraging praise from the world No1 afterwards.

“I knew she had a lot of potential, but playing against her, I can see she has even more potential than I thought,” said Williams. “I think it helps that she’s a leftie, too, and she’s just so relaxed, and that adds another dimension to your game when you’re so relaxed.

“I think what’s really good about her is she doesn’t have too many weak points. It’s always a good sign of a future champion.”

Robson is still in the doubles competition in Rome with the hugely experienced Lisa Raymond, a partnership that reached the finals in Miami. Then the Briton heads home for a couple of days before making an early start for Paris and some time on the famous courts of Roland Garros.

And if there’s one place that Robson will expect to shine, it will be in the setting of a Grand Slam where she has already so often to risen to the big occasion.