WTA Rome 2013: Serena Williams powers to a 6-1 6-3 win over Victoria Azarenka to win the Italian Open and extend unbeaten run 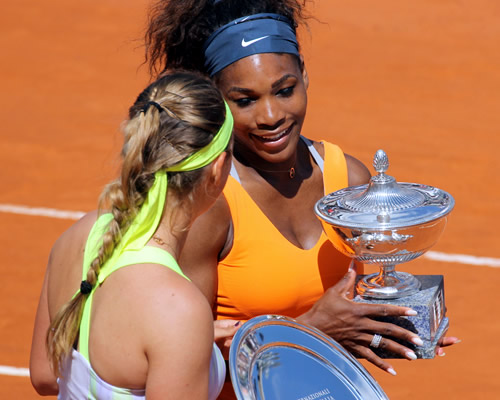 Many rued the departure of the glamorous, popular defending champion, Maria Sharapova from the Foro Italico—unbeaten in the tournament but beaten by illness.

But it left the way open for possibly the most compelling contest in women’s tennis at the moment between the two women who have shared the No1 rankings this year: current No3 Victoria Azarenka and current No1, Serena Williams.

Williams may lead their head-to-head series, 11-2, including their only previous clay court meeting in the final of Madrid last year. But Azarenka held sway over the top spot for most of last year, beginning 2012 with a 26-match streak until she fell in the quarters of Miami. And most important of all, she won their last meeting, their only 2013 meeting, in the final of Doha this year.

But this is clay, where Azarenka has won only a single title out her tally of 16. Williams, meanwhile, came to the final with a career-best winning streak of 23 matches, including the last 15 straight on clay—Miami to Charleston to Madrid, and fitting in two Fed Cup wins on hard courts in the middle of her clay streak.

As if her form did not look good already, dropping just 10 games in her four matches en route to the final, she decided her 6-3, 6-0 one-hour trouncing of Simona Halep was not good enough and went straight to the practice courts to fine-tune some parts of her game.

What those parts were, she would not reveal, but she looked far from happy, in the opening three games of the match, with her serve. Normally the foundation of her power game, she struggled to find her first delivery, but the rest of her game more than compensated.

Azarenka opened serve but after eight minutes and three break points, she conceded the it as a forehand Williams winner flashed past her.

The American went through similar trials in her first game, too, another eight minutes but she managed to hold.

Twenty-two minutes into the match, Azarenka was broken again but seemed at least to get her return of serve grooved to take advantage of the Williams second deliveries and she broke back.

The respite was transient though, and Williams broke again to love, and broke once more in the seventh game for the set, 6-1. She had touched barely 45 percent on her first serves, but such was the resilience of her baseline game, with some energetic defence, that she had resisted many of Azarenka’s power plays to make 20 or so winners even with an unusually low ace count of three.

Azarenka is not a Grand Slam champion and former No1 for nothing though. She continued to hit from both wings with penetrating pace, but such aggressive play tends only to draw more of the same from Williams.

The Belarusian stayed all square for five games, saving three break points, but Williams went in for the kill in the sixth, made two return of serve cross-court winners and broke to lead 4-2.

Still Azarenka came back at Williams, breaking back and throwing in some net plays to try and take control. But yet again, the advantage was fleeting. Williams broke one final time for a 5-3 lead and served the match out to love in some style.

She celebrated in some style too, making her winner’s speech to the packed arena entirely in Italian. She has said many times before how she loves Rome, and there is no doubt, 11 years after she won her only other title in Rome, that they love her too.

Williams did not need to win the match to hold her No1 ranking but she must also, now, head to Roland Garros as the favourite for the title—and that, too, would be her first in Paris since 2002.