WTA Rome 2014: Marianne Bevis rounds up all of the latest news from the women's tournament at the Foro Italico 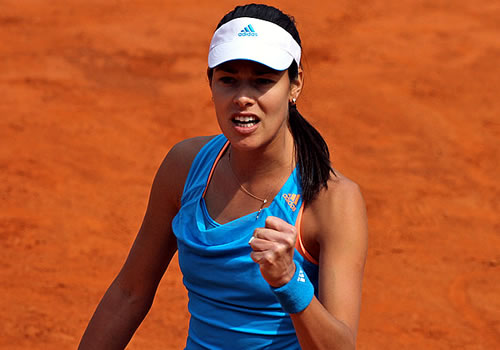 With her first Madrid title at the weekend, following hot on the heels of her third consecutive Stuttgart title, Maria Sharapova rose back to No7 in time for this week’s Rome Premier, a title she had won twice before.

She was on track to set up the match that everyone in Italy wanted to see—Sharapova against Serena Williams—and, more pertinently, set an early indicator of form ahead of the French Open seedings.

For what, in the wider scheme of things, has been impressive about these two had been their recent records on the red dirt.

Since losing the French Open semi-final to eventual champion Li Na in 2011, Sharapova had put together a 46-3 win-loss record on clay. The rub was, all three losses had come to one woman, her nemesis Williams.

The world No1 had proved her own prowess on clay in a spectacular 2013 season of 11 titles that saw her unbeaten in all 28 matches on the red dirt: Charleston, Madrid, Rome, Roland Garros and Bastad.

Ahead of Rome, there was some concern about Williams, who pulled out of the Madrid quarter-finals with a thigh injury, but she put any doubts to bed with an impressive opening match against this year’s Charleston titlist, Andre Petkovic.

However, few had reckoned with the 2008 French Open winner, Ana Ivanovic. 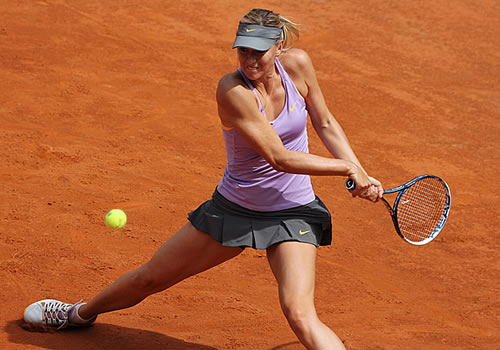 Sharapova’s record against the Serb was very much in the Russian’s favour, including the last seven matches in a row. However their blockbuster on Court Centrale saw Ivanovic attack from the start and hit 22 winners—the last on match point—to score her first win over Sharapova since the French Open in 2007.

Ivanovic thus became only the second player to beat the Russian on clay since the start of 2012 and claim her fourth top-10 win this year. She also happened to beat Williams at the Australian Open. It’s her most top-10 victories in a season since 2008, so is that a sign that Ivanovic is close to the 20-year-old’s best that won Roland Garros?

A joyous Ivanovic was, primarily, delighted to have turned around the result of their last meeting just weeks ago in Stuttgart: There Ivanovic had led by a set before losing the final in three.

“I really tried to learn from the experience I had in Stuttgart. Took time away from her, and stepped forward. Very, very pleased: I didn’t do much wrong.”

But her confidence is such that she does have ambitions not just for another French title but for the No1 ranking:

“I feel I am actually a more complete player [than when I won Roland Garros in 2008]. I use more variety, I come to the net more often. I just enjoy building on my game. I really look forward to the French Open—it’s a special place for me. I really feel I have the game to be at the top: I was No1 before, and I want to give myself the best chance to get back there.” 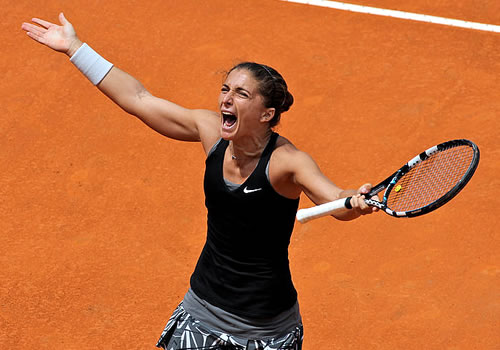 Ivanovic, though, is currently ranked No13, and will need to win the Rome title to enter the top 10 for the first time in five years.

Meanwhile, the top three ranked women were all still going strong in Rome—until a certain pocket rocket named Sara Errani thrilled the home crowd. But what better place to do it than on the biggest tennis stage in Italy?

There were fears that No2 Na Li would come unstuck against Sam Stosur, who had beaten her in all six previous matches. Li is a former Roland Garros champion, but then Stosur has been a finalist in Paris, too. Li scored her 500th career match win and her 24th win of the season to reach the last 16, and required little more than an hour to brush aside Stosur, 6-3, 6-1, to reach the quarters.

She then faced world No11 Errani, who was a semi-finalist here last year and has also been a former Roland Garros finalist. But she had never beaten Li—and not even won a set from her since their first match in 2008. After an early break apiece, though, that changed: Errani won the opener 6-3.

Li came back strongly, eliminating all her errors and powering to a 6-4 second set, but a gutsy Errani withstood huge pressure on serve in the fifth game to hold 3-2 and did not lose another game. It was hard to tell who was more excited, Errani or her thousands of fans.

World No3 Agnieszka Radwanska has enjoyed less success on clay than any other surface, but she played another of Rome’s favourites to beat former Roland Garros champion, Francesca Schiavone. The Italian woman turns 34 next month, and had already dismissed much younger opponents in Eugenie Bouchard and Garbine Muguruza, but it was the wily Radwanska who equalled her best previous result in Rome, in 2009, to reach the quarters. 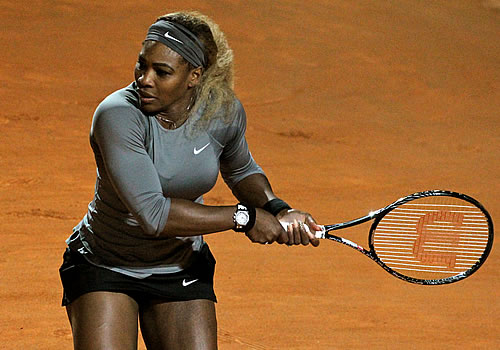 There she faces the resurgent Jelena Jankovic, who has won the Rome title twice before, in 2007 and 2008. Should she win her third Rome title, she could return to No5 in the rankings for the first time in almost four years.

Meanwhile, defending champion Williams continued her easy progress, dropping only seven games in her two matches so far. It’s hard to see her losing to the 43-ranked Zhang Shuai and, if she wins, she will take the lead over her elder sister Venus in career match-wins. Both now stand at 652—the most among active players.

Incidentally, with the seedings for the French Open decided after the Rome tournament is over, the top four are already determined. Williams, Li and
Radwanska will be joined by No4, Simona Halep, even though the Romanian was forced to withdraw after her third round win with an abdominal strain.