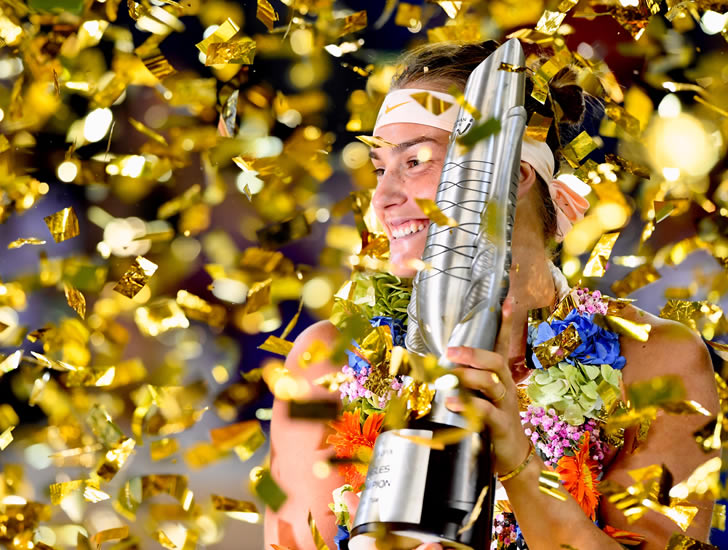 One the tour’s most exciting young players, 20-year-old Aryna Sabalenka, has continued her rise up the ranks—to No16 next week—after winning her second Premier title in as many months.

The Belarusian beat Anett Kontaveit, 6-3, 6-3, to win the fifth Dongfeng Motor Wuhan Open, and become the youngest winner of a WTA Premier 5 event since Belinda Bencic won the title in Toronto in 2015. She is also the youngest Wuhan Open champion in the history of the tournament.

Her victory in Wuhan continues what has been a breakthrough season for Sabalenka. This time last year, she was ranked 111 in the world, but since then she has won her first career title in New Haven, reached the finals of Lugano and Eastbourne, and the semi-finals in Cincinnati. In under four months, she has also claimed wins over seven top-10 players, which has taken her to No12 in the race to the WTA Finals in Singapore.

She could earn still more points in the lucrative final Premier Mandatory of the year, the China Open, which has just got under way in Beijing. There, she has been awarded a bye to the second round but faces either Garbine Muguruza or Ekaterina Makarova in her first match.

Of her triumph in Wuhan, she said:

“I was nervous today a little bit. You’re always nervous before the final because it’s different. But on the court, I was pretty comfortable. I was confident with myself.

“I’m so happy to get this trophy. I always wanted to have something special. This looks really cool. I’m so happy that I get this title. It’s the first final of this kind of tournament.”

She went to talk of the tournament that has invested huge resources in what has become a highly prestigious event—helped not a little by being home to China’s only Major champion Li Na.

“This is one of my favourite places to play. I really enjoy to be here. I don’t know why, but I really play well here. Yeah, I’m always waiting for this part of the season… [Laughing] Probably they have to think about having more tournaments in China.”

She spoke, then, about her chances of reaching the Singapore finale:

“Before Wuhan, I was really thinking about Singapore, that I really want to get in there. It makes me really nervous. Like, I couldn’t move on the court, I couldn’t do anything. Then when I was speaking with my coach, I understand that is not the main goal for this year. Then I start to be more relaxed…

Elise Mertens and Demi Schuurs won the doubles title with a 6-3, 6-3 win over Andrea Hlavackova and Barbora Strycova. The Belgian duo had double reason to celebrate the title also sealed their place in the year-end WTA Finals in Singapore.

Race to London heats up in Asia: Del Potro, Zverev, Anderson edge to qualification – and Djokovic targets No1