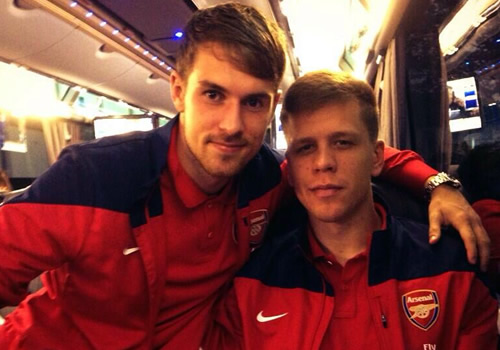 The Citizens took the lead in the 28th minute when Sergio Agüero finished from close range, but Arsenal equalised through Jack Wilshere’s fine finish after the break.

The Gunners then went ahead when Alexis Sanchez fired into the top corner. However, Demichelis’s thumping header earned the defending champions a point in north London.

The game inevitably prompted plenty of activity on Twitter – and here are our favourite post-match updates.

England legend Gary Lineker (@GaryLineker) very much enjoyed the game: “Marvellous start to the day’s football. We have a show these days on @BBCOne called Match of the day showing all the games. Could catch on.”

Golfer and Arsenal fan Ian Poulter (@IanJamesPoulter) was also entertained: “That game had just about everything.”

Unused substitute Lukas Podolski (@Podolski10) reflects on the result: “Good game, unfortunately only 1 point… Next game on Tuesday! But it was nice to meet Samuel Jackson after the game!”

Midfielder Aaron Ramsey (@aaronramsey) is disappointed with a point: “Great game played at a mad pace but very frustrating not to see it out and win. Hope @MatDebuchy is ok, wish you better mate.”

City goal-scorer Sergio Aguero (@aguerosergiokun) was upset not to get the three points: “The draw was fair but we played a great match and almost had it in the last minutes. We must keep fighting – this just begins! C’mon, City!!”

Ex-Stoke defender Danny Higginbotham (@Higginbotham05) gives his post-match verdict: “Arsenal did well getting back into the game. If they had that defensive midfielder though I really feel they would of won.”