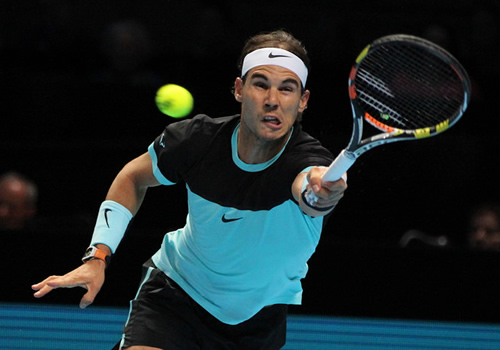 The first results of the ATP World Tour Finals’ second pool all, of course, had significance for the players and the tournament.

All had reached at least the semi-finals, too, and both Nadal and Ferrer had got as far as the final—the former twice.

But not one of them had won this title, blocked, it seemed, by the dominance first of one player, Roger Federer, and now another, Novak Djokovic, who had 10 titles between them. These two had, indeed, denied both Ferrer and Nadal in their finals.

And with the dominant two, Djokovic and Federer, drawn into the other pool, the door was open for one of them to contest the title come final Sunday.

For two men here, though, there were some other numbers to play with. Murray had only to win two matches to seal the year-end No2 ranking for the first time. He had been at No2 before, for a few months in the Wimbledon-winning year 2013, and for a few weeks this autumn—swapping with Federer right up to the week before London. But never had he held the ranking ahead of the Australian Open—and that is where the significance really rested.

After taking his first step with a victory over David Ferrer, he explained it thus: “It would obviously be nice to finish No2 because I haven’t done it before, but it’s not a goal that I’d set for myself at the beginning of this year. But there are obviously benefits for Australia, being seeded No2 is slightly better than being seeded No3 or 4. That’s the main benefit.”

And with the chances of a first World Tour Finals title and, beyond that, an historic Davis Cup title, on the line, one ranking place up or down, perhaps seemed small fry.

No doubt Wawrinka would claim the same of his chance to become the top-ranked Swiss by the end of the year, yet having spent so long as second in command to the illustrious Federer, there would surely be some personal satisfaction in out-ranking his 34-year-old compatriot at the year’s end, even though he had tasted that rarefied air for a full 23 weeks after winning his first Major in Australia last year.

However, it would take a perfect run in London, combined with a less-than-perfect performance from Federer, to overturn the 840-point difference. The elder Swiss had given little away in his first match, and now it was Wawrinka’s turn to try the same—and a formidable task it was—to beat Nadal for only the fourth time in 26 previous meetings.

The good news for Wawrinka was that all three of those wins had come in their last four matches, three of them this year, the last on the very similar indoor hard courts of Paris-Bercy.

Wawrinka was also the only man this year to deny Djokovic a Major, in a blistering, winner-packed performance at Roland Garros. Indeed Wawrinka has fallen short of the quarter-finals in only one of his last eight Majors, winning two and twice reaching the semis this year. He opened the year with the Chennai and Rotterdam titles and came to London with the Tokyo title and a semi run in Paris.

However there was a but. In between his 2015 highs, there had been troughs for the Swiss. Before Paris he lost to Nadal in the Shanghai quarters and then lost in the first round of Basel. Before Tokyo, he lost in the second round of Metz, one of 10 losses in the first two rounds of tournaments.

As for Nadal, a slow start to the year after missing the end of 2014 with injury and appendicitis was exacerbated by a loss of confidence, and unexpected defeats on his beloved clay and early losses on summer’s grass.

But as the year drew to its end, the form and focus were returning: the final of Basel and Beijing, the semis of Shanghai. The question was, would this be a repeat of Nadal’s win in Shanghai, or Wawrinka’s win in Paris?

It looked very much like the latter after the first few minutes: Wawrinka broke to love, but then Nadal just as quickly broke back. It was honours even, and stayed that way to 3-3. The Spaniard was now holding serve comfortably, but Wawrinka’s began to waver in a long nervy eighth game. Four deuces and three break points later, via two double faults, and Nadal had the key break. He served out with an ace, 6-3.

The start of the second set was even more peculiar, for although it was punctuated by four aces from Wawrinka, he nevertheless faced six break points before holding serve. In another mirroring of the first set, Nadal too faced break points and survived. The fluctuating tennis of the Swiss became increasingly pronounced as the errors cranked up and Nadal broke him in the third game, and again in the fifth. With two more dire long forehands in the concluding game from the Swiss, Nadal cruised to a final hold, 6-2, after an hour and 22 minutes.

Wawrinka pulled no punches about his performance, in a frank assessment of his 35 unforced errors: “When something goes wrong today, everything went wrong. Just everything went the wrong way. Simple. Was just a really bad day at the office. Many little things. For sure, if you look, it’s a really bad match… I will have to play better tennis. I will have to be back on my top form for the next one against David Ferrer.”

Nadal reflected on a near flawless performance, just 12 errors to 18 winners, with his characteristic pragmatism.

“I think I play well. I think I play a solid match. I had one bad game, the first one of the match. But then immediately I was playing well, no? I played aggressive. I played with not many mistakes. Just the thing I can do a little bit better is serving. For the moment I didn’t serve as good as I was doing in the previous days. But for the rest, all the shots worked well: backhand, forehand, good volleys, good smash, no missing the smashes today. So that’s good.”

He will need all his skills and prodigious fitness when he takes on home favourite Murray on Wednesday afternoon. The Briton won their last meeting to claim his first clay Masters title in Madrid, though Nadal won the previous two meetings.

It’s tough to call—but for Wawrinka, it’s back to the drawing board, or that ‘No1 Swiss’ accolade is likely to evaporate before his eyes.