By The Sport Review
Updated on Monday 14 February 2022 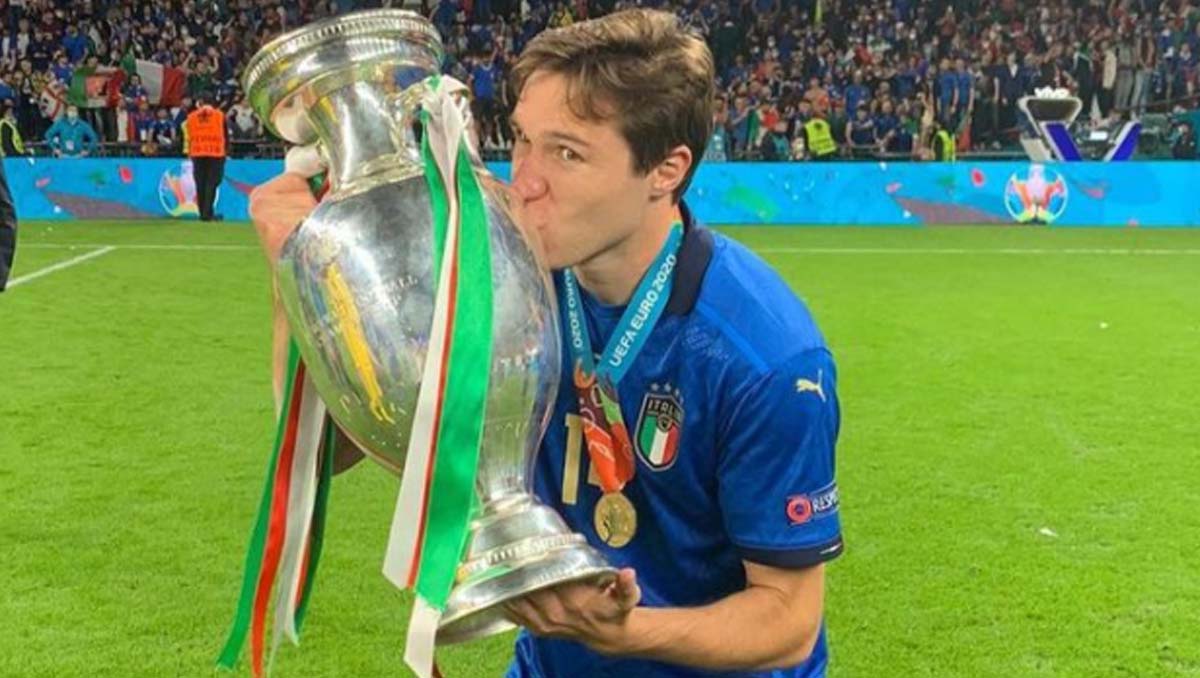 Federico Chiesa is an Italian footballer who players as a winger for Juventus, on loan from Fiorentina.

The talented 24-year-old began his youth career with Settignanese before joining Fiorentina in 2007.

He came through the Italian club’s youth system before making his first-team debut for Fiorentina in the 2016-17 season.

Chiesa, who is the son of former footballer Enrico Chiesa, scored 34 goals in 153 games for Fiorentina in all competitions before he sealed a loan move to Juventus in the summer of 2020.

So, what do we know about Chiesa’s journey towards becoming the talented attacker he is today? This is his story.

Federico Chiesa was born on 25 October 1997. He is the son of former Italian footballer Enrico Chiesa.

There have inevitably been comparisons between father and son on the pitch. Enrico Chiesa scored 138 Serie A goals during spells with Sampdoria, Cremonese, Parma, Fiorentina, Lazio and Siena.

“My son has a lot of fun playing, and this is the nicest part of it,” said Enrico Chiesa of Federico in 2017.

“He has to continue on this path, continue doing well with Fiorentina. A comparison to me? Federico is only 19, let’s give him time to grow. He just has to continue enjoying himself.”

Federico began his youth career at Settignanese, a Tuscan club based not far from Florence, and was initially coached by Fiorentina legend Kurt Hamrin. 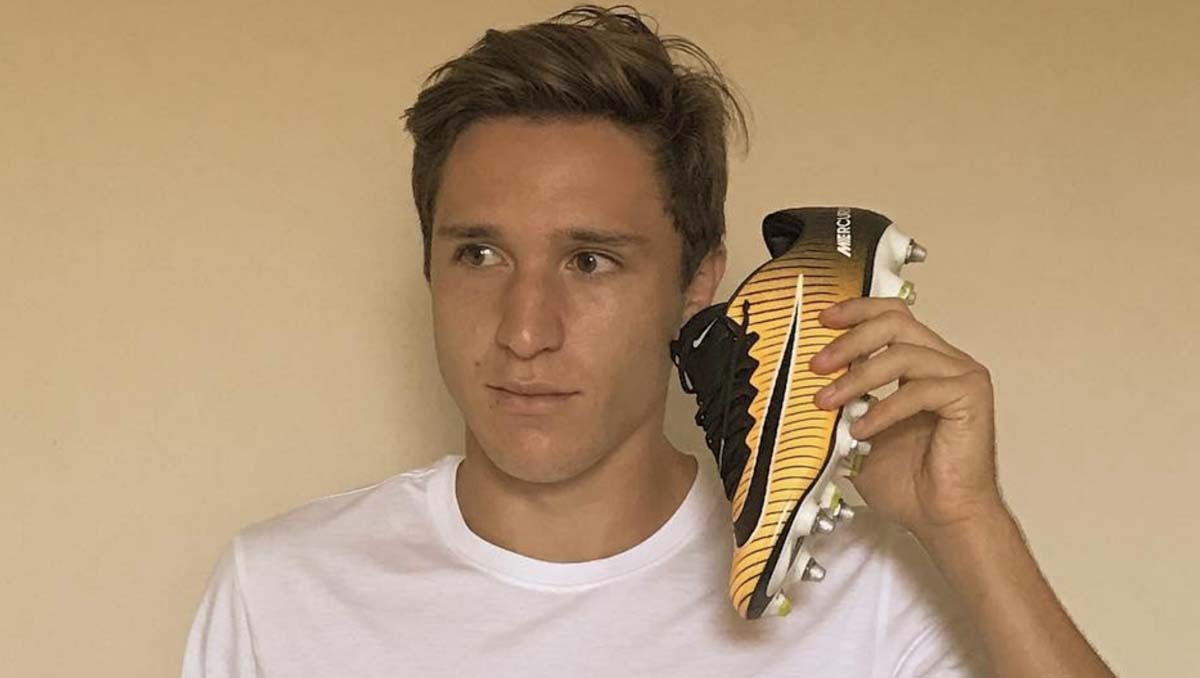 Chiesa joined Fiorentina’s youth set-up in 2007 when he was 10 years old. He was part of the Under-19 squad in the 2014-15 season and scored one goal in seven games for the Primavera side.

After impressing in Fiorentina’s youth set-up, Chiesa was handed his competitive debut for the Italian club on 20 August 2016, when he started a 2-1 defeat by Juventus in Serie A.

“I couldn’t believe it when Sousa told me I would be starting against Juventus in August – my knees were trembling,” said Chiesa after making his Serie A debut.

Chiesa scored his first goal for Fiorentina in a 2-1 away victory against Qarabag in the Europa League on 8 December 2016.

He went on to score four goals in 34 games in all competitions in the 2016-17 season in what ended up bring a breakthrough season for the young attacker.

Paulo Sousa, who was Fiorentina coach at the time, was delighted by the way Chiesa was progressing.

“Everyone is pushing him to become who he deserves to be,” said Sousa in 2017. “He won our hearts with his energy and enthusiasm. Federico plays with the joy of a child. It’s the best thing you can see in a professional footballer.”

Chiesa continued to hold down a regular spot in the Fiorentina team in the seasons that followed.

His fine form resulted in him being rewarded with a new and improved contract to keep him at Fiorentina until the summer of 2021, in a deal which was agreed in January 2017.

In total, Chiesa scored 34 goals in 153 appearances for Fiorentina in all competitions before a blockbuster move to Juventus beckoned for the attacker.

Chiesa was on the move in the summer of 2020 and he joined Juventus on a two-year loan deal on 5 October 2020. 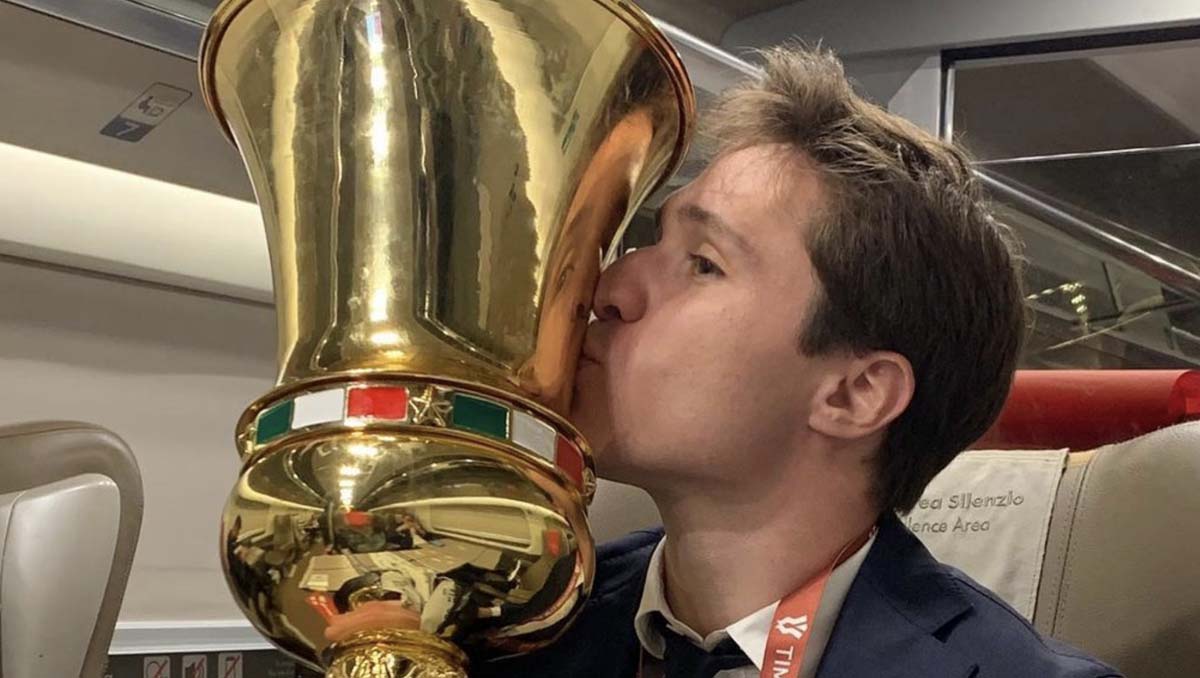 The deal was for two seasons and included a conditional obligation to buy for €40m, which could include an additional €10m in add-ons.

Speaking after his move, Chiesa said: “I learned about it [Juve’s interest] in the last days of the transfer market. I thank Juve for looking for me and for the financial effort made to buy me. I am proud to wear this shirt and take the field for this prestigious team.”

Asked about his hefty transfer fee, Chiesa responded: “It’s a bit of responsibility, but I’m thinking about playing. I still have to learn what the coach wants, it’s all new to me, but I’m happy to be here.”

Chiesa made his competitive debut for Juventus on 17 October 2020, when he made an assist for Alvaro Morata in a 1-1 draw away to Crotone in Serie A. He was later sent off during the same game.

He netted his first goal for Juventus on 2 December 2020 in a 3-0 home win against Dynamo Kiev in the Champions League.

Chiesa enjoyed a strong debut campaign with Juventus in the 2020-21 season, scoring 14 goals in 43 games in all competitions for Andrea Pirlo’s men.

On 9 January 2022, in a 4-3 Serie A win against Roma, Chiesa suffered an anterior cruciate ligament injury. He underwent an operation to correct the problem and was ruled out for an initial seven months. 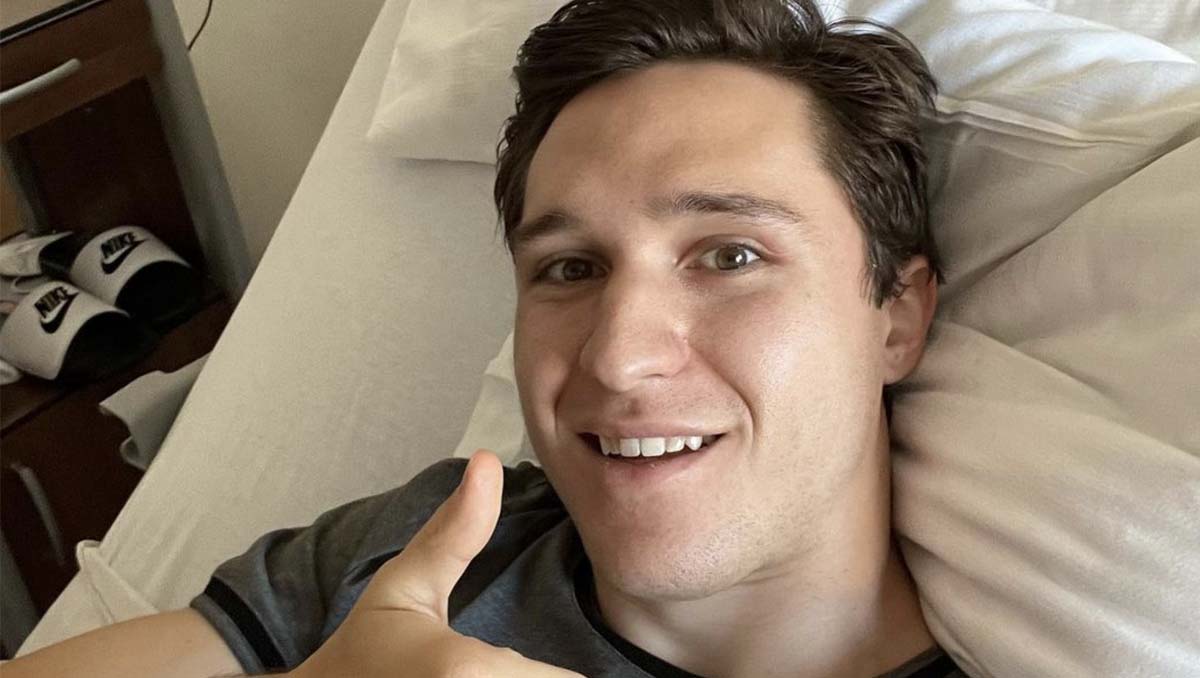 Chiesa represented Italy at Under-19, Under-20 and Under-21 level before making his senior debut for the national team in 2018.

He made his first senior appearance for Italy on 23 March 2018, in a 2-0 friendly defeat by Argentina.

Chiesa was a key part of the Italy side who won Euro 2020 in the summer of 2021. He scored two goals in seven games for Roberto Mancini’s men at the tournament to help them clinch the trophy. 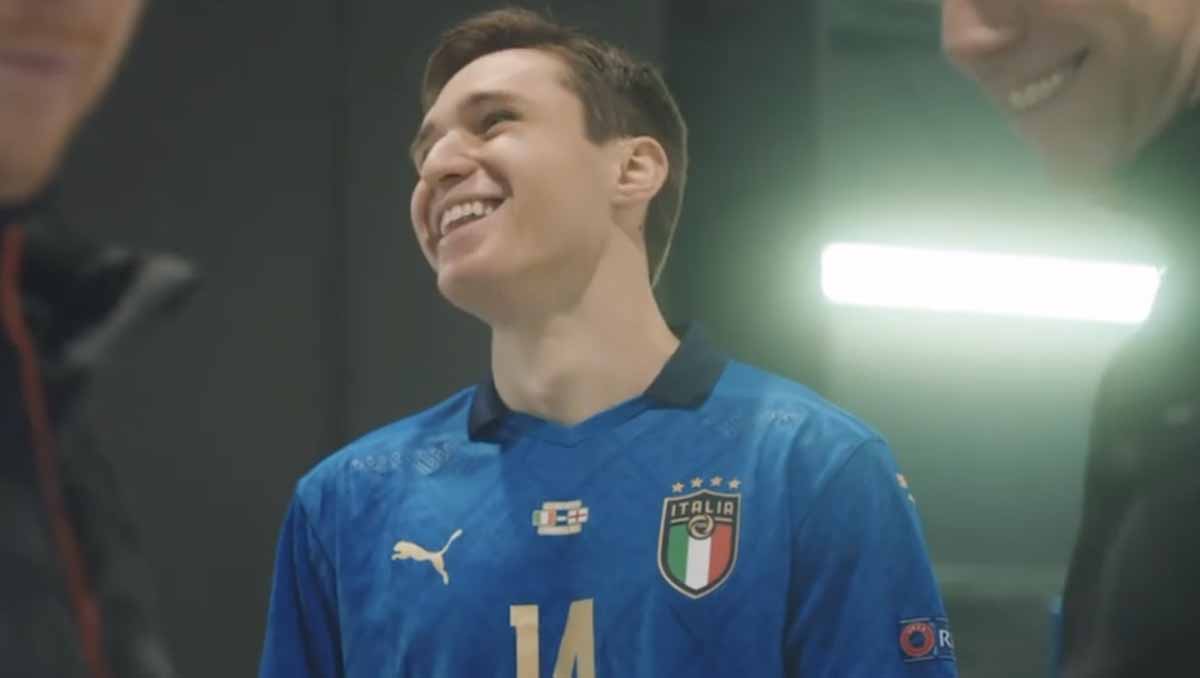 Chiesa was enrolled at the International School of Florence, where he took lessons in English.

He also spent two years at university, studying Sports Science. “My father told me that it could also help me for football,” said Chiesa of his studies in 2017. 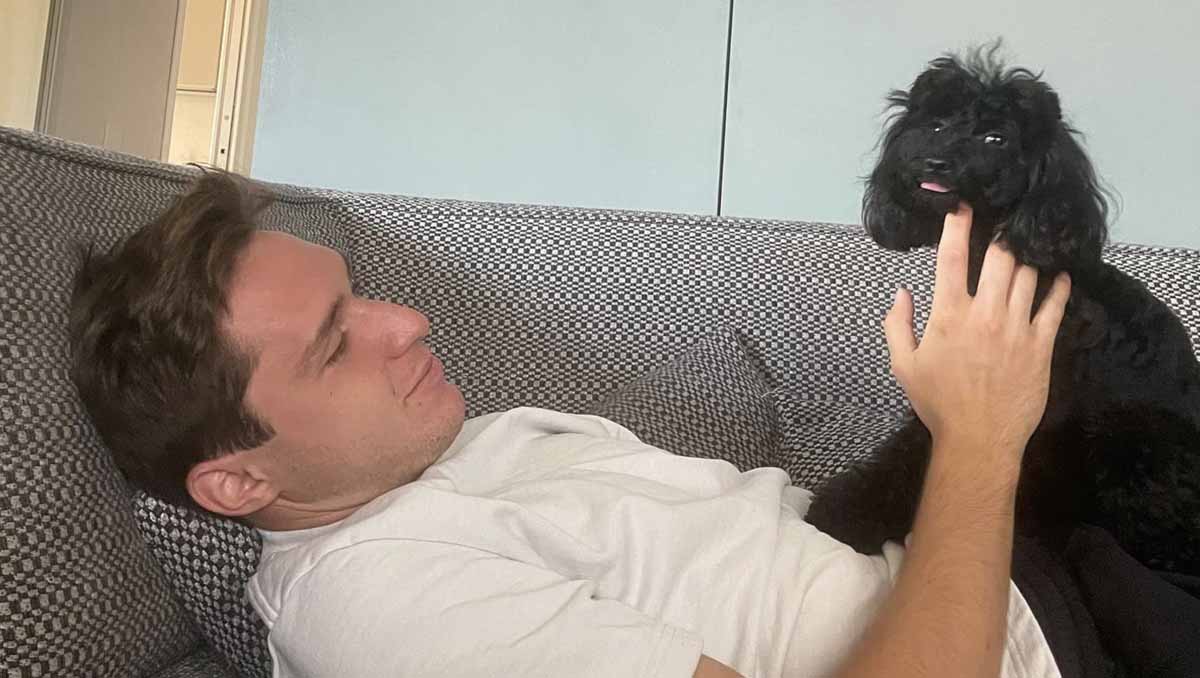 Former Juventus and Italy goalkeeper Gianluigi Buffon, speaking in July 2021: “When he arrived at Juve I didn’t think he was so good. I am honest. In the European Championship he was unbelievable, in the final match with England, it was impossible to stop him.

“After a season at Juve with Federico it is no longer a surprise for me, but it was not obvious that he would be able to play at such a high level in a tournament like the European Championship.

“If you do those things at such a high level, then it means that you are really special.”

Former Juventus manager Andrea Pirlo, speaking in January 2021: “Chiesa is a young player who joined a big club, facing international matches for the first time, and it was a big step up for him, so he was a little shy at first. He’s settled now, gained in confidence and has improved a great deal.

“It’s good that he is finishing off the moves that we attack, and he ought to do it more often, making the most of his runs from deep.”

Juventus defender Giorgio Chiellini, speaking in January 2022 following Chiesa’s knee injury: “I am sorry for Federico, I know what it means because I experienced the same thing two years ago. He can mature, become more man and come back stronger.”