Robert Lewandowski is a Polish footballer who plays as a striker for Bundesliga club Bayern Munich.

The Poland international began his professional career at Znicz Pruszkow and scored 36 times in 59 games between 2006 and 2008.

Lewandowski moved to Lech Poznan and won the 2009-10 Polish title and Polish Cup during a two-season stint at the club.

Robert established himself as a top European striker during four seasons at Borussia Dortmund between 2010 and 2014.

Lewandowski won two Bundesliga titles at Dortmund before he completed a move to their German rivals Bayern Munich in 2014.

Widely regarded as one of the greatest strikers of all time, he has won seven Bundesliga titles in a row with Bayern and has established himself as one of European football’s top marksmen.

Lewandowski scored on his international debut in a 2-0 win against San Marino in September 2008 and is the all-time top goal-scorer for Poland.

He scored 15 times in 27 games to help Znicz Pruszkow secure promotion to the Polish top flight. 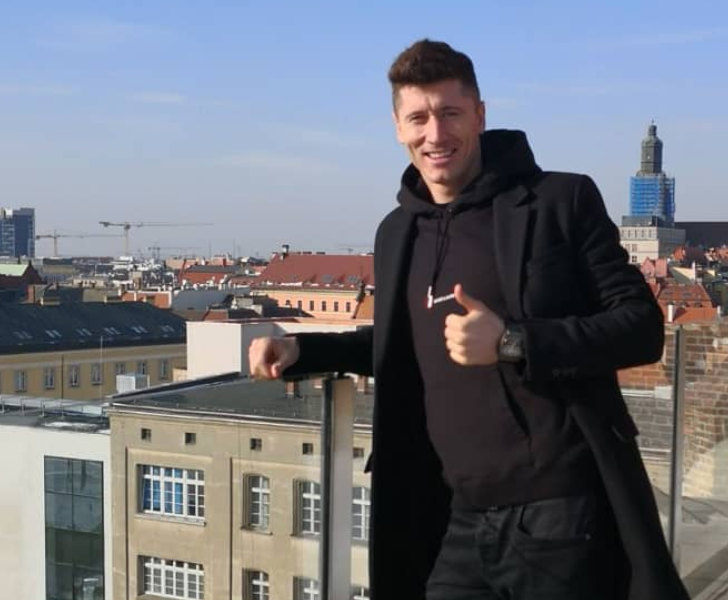 Lech Poznan signed Lewandowski in June 2008 after the Polish forward scored 38 goals in 66 outings in all competitions combined with his previous clubs.

He scored on his first appearance for Lech Poznan in a 1-0 win against Khazar Lenkoran in a Uefa Cup qualifier.

In total, Lewandowski netted 41 goals in 82 goals in all competitions for Lech Poznan, helping them to win the Ekstraklasa, Polish Cup and Polish Super Cup during his two seasons with the club.

Borussia Dortmund signed Lewandowski in a £3.5m deal from Lech Poznan in June 2010. The Polish striker initially signed a four-year deal with BVB to commit his future until 2015.

Lewandowski scored his first goal as a substitute in the Bundesliga in a 3-1 win against Schalke 04 in the Riverderby. He came off the bench again in their next top flight game to score in a 5-0 victory over Kaiserslautern.

He scored 11 goals and made two assists in 41 games in all competition in his first season at Borussia Dortmund under Jurgen Klopp.

Robert benefited from an injury crisis at Borussia Dortmund at the start of the 2011-12 season. He scored his first Bundesliga goal in a 2-1 win over Nurnberg.

Lewandowski netted his first hat-trick in a 4-0 win against Augsburg on 1 October 2011. He continued his excellent form with goals either side of half-time to help Dortmund ease to a 5-0 over FC Koln to send them into second place.

Having scored another two goals in a 5-0 win over Hamburg to send them to the top of the table, Lewandowski netted the winner in a 1-0 victory over Bayern Munich at Westfalenstadion in April 2012.

Robert scored 22 goals in 34 games in the Bundesliga to help Dortmund to win the title. He finished with 30 goals in all competitions.

Dortmund managed to retain the Bundesliga title in the 2012-13 campaign.

Robert scored 24 goals and made five assists in 31 games in the Bundesliga to fire Klopp’s side to successive titles.

He also played a crucial role in their Champions League run. Lewandowski scored against Ajax and Real Madrid in the group stage.

The Polish striker scored in a 3-2 win against Shakhtar Donetsk in the Champions League round of 16. He continued his goal-scoring record with a strike in a narrow win over Malaga in the last eight.

Lewandowski scored all four goals in Dortmund’s 4-1 win against Real Madrid in the Champions League semi-finals. However, Robert didn’t get on the score-sheet in a 2-1 loss to bitter rivals Bayern Munich. 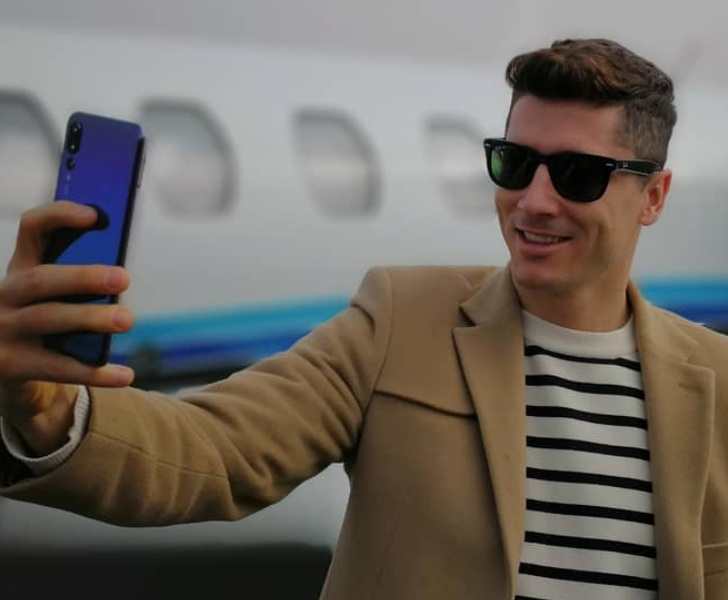 His final season at Dortmund yielded a return of 28 goals in 48 games in all competitions.

Robert moved to Bayern Munich on a free transfer from Borussia Dortmund on 9 July 2014.

In a twist of fate, he made his competitive debut in a 2-0 loss to his former club Borussia Dortmund in the German Super Cup.

He opened his account for Bayern Munich in a 1-1 draw with Schalke 04 in his second Bundesliga game at the end of August.

Lewandowski scored in a 2-1 win against Dortmund in the Bundesliga in November to leave Klopp’s men in the relegation zone.

He scored 17 times in 30 games as Bayern Munich won the Bundesliga title. Lewandowski netted six times in the Champions League but the German side lost to FC Barcelona in the semi-finals.

Robert produced his best return in the Bundesliga up to that point when he scored 30 times in 31 games in the German top flight in 2015-16. Lewandowski won his fourth Bundesliga title.

He scored nine goals in the Champions League but Bayern Munich lost to Atletico Madrid in the semi-finals.

Robert matched his 30-goal haul in the 2016-17 season to help Bayern win the Bundesliga title for a third successive season.

Lewandowski entered into the top 10 leading goal-scorers in Bundesliga history with a goal in a 3-1 win over Cologne in December 2017.

Robert scored in 11 successive home games against Schalke 04 at the Allianz Arena in February 2018.

He finished the campaign with 29 goals in 30 games to win his sixth Bundesliga crown.

Lewandowski made his senior international debut for Poland in a 2-0 win against San Marino at the age of 20 on 10 September 2008.

Robert scored the first goal of Euro 2012 in a 2-1 win against Greece.

After having captained the national side for the first time in 2013, he netted his first international hat-trick with four goals in a 7-0 win against Gibraltar in the 2014 World Cup qualifying campaign.

Lewandowski netted a header to help Poland beat the Republic of Ireland and secure a place at Euro 2016. He didn’t score at the tournament until the round of 16, when he netted in a 1-1 draw with Switzerland and dispatched his spot-kick in the shootout.

Lewandowski found the net again in a 1-1 draw with eventual winners Portugal and scored in the penalty shootout but Poland lost on penalties.

He became Poland’s all-time top goal-scorer when he netted a hat-trick in a 6–1 win over Armenia to take his tally to 50 goals.

Lewandowski’s father, Krzysztof (who died in 1995), was a Polish judo champion, and also played football for Hutnik Warszawa in the second division. His mother, Iwona, is a former volleyball player for AZS Warszawa.

His sister represented Poland’s Under-21 team, while his wife Anna Lewandowska won the Bronze medal at Karate World Cup in 2009.

Robert and his wife Anna Lewandowska have two daughters together. 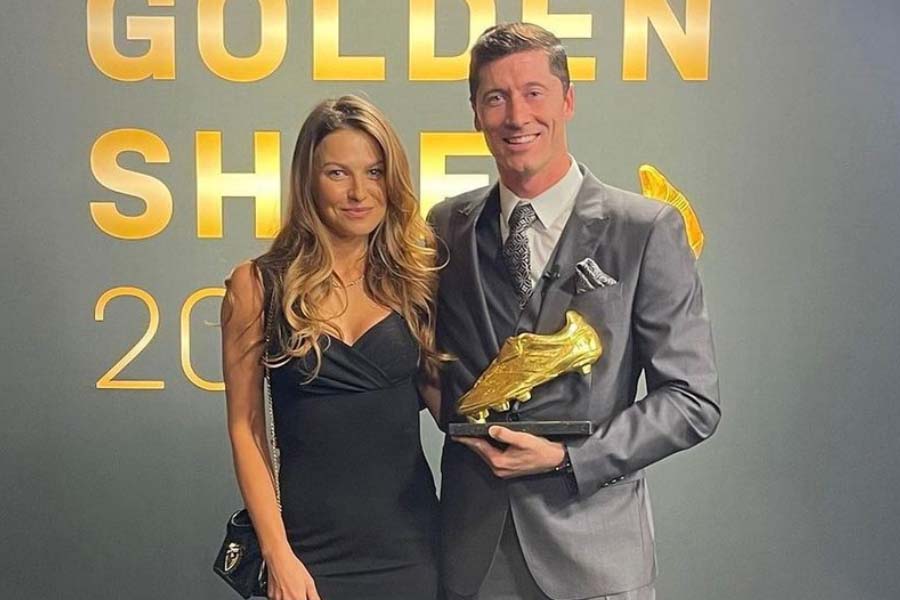 Lewandowski is a practising Catholic, and he met Pope Francis in October 2014.

Robert Lewandowski – Did You Know?

• He set a Bayern Munich record when he scored in 12 consecutive league games in the 2012-13 season.

• Lewandowski has won a wide range of individual awards, including the European Golden Shoe in 2020–21. He was also named as the Best Fifa Men’s Player in 2020.

• He finished in second place behind Lionel Messi in the voting for the 2021 Ballon d’Or award, trailing the Argentine by just 33 points.