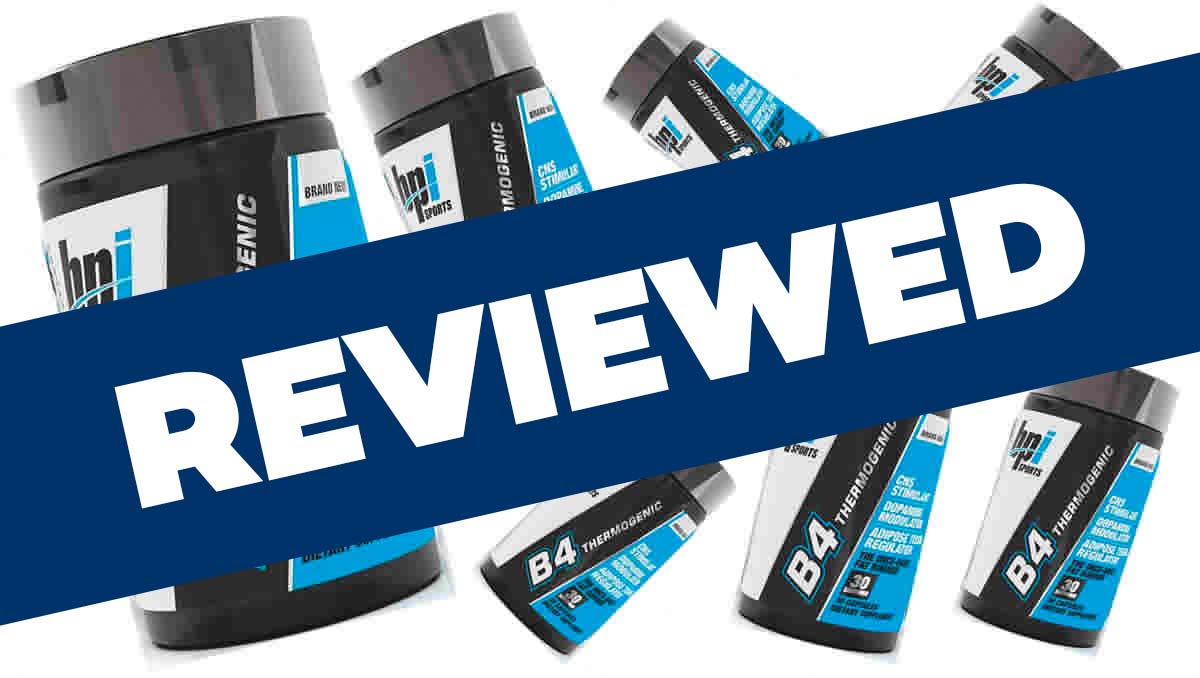 The B4 Thermogenic is a supplement made by BPI Sports that’s available to buy online, and that has been formulated to help provide support on your health and fitness journey.

It’s marketed as an “extra-strength” supplement that’s been specifically designed to help support you as you look to hit your body goals.

Before we take a detailed look at B4, we want to make some important points when it comes to the supplements in this category.

It’s important to realise that most of the supplements in this category are not ‘magic pills’ – and they are generally not proven to ‘burn’ fat on their own.

The purpose of this article is for us to take a detailed look at the B4 supplement to see where it stands in a crowded market.

We’re going to be paying particularly close attention to the ingredients formula, the doses and the directions as we take a look at it from all of the important angles.

So, with the introductions out of the way, let’s start taking a closer look at the B4 supplement in a bit more detail.

B4 Thermogenic – The Basics

As we have already covered, the B4 supplement is made by a company called BPI Sports, and it’s available to buy from a number of online retailers including Amazon.

It claims to be a ‘keto-friendly’ supplement that has been specifically formulated with ingredients that can provide some support on your health and fitness journey.

The product page on Amazon claims that this supplement is the “perfect complement” to the ketogenic diet or any other sensible weight management programme.

The listing page also says that B4 contains “cutting-edge ingredients” that have been selected because they can bring a host of benefits to the table.

On Amazon, it also says that this supplement comes complete with a 30-day 100% money-back guarantee, and that the B4 product is made in the USA.

Interestingly, the listing page on Amazon goes on to reveal that B4 can be taken as a pre workout supplement, as well as on non-training days.

It’s marketed as an “extra-strength” supplement that can help to support you on your health and fitness journey.

So, it all sounds pretty good so far. Generally speaking, it’s best not to pay too much attention to what manufacturers say about their own supplements. Instead, it’s usually better to focus on the all-important ingredients formula and their doses.

So, with that in mind, let’s move on to the next important part of the article.

Let’s begin this part by taking a close look at the actual B4 ingredients label.

It’s important to note that this label was shown on Amazon.com at the time of writing, but you should carefully check the label of any supplement you’re thinking of taking, as the formulas can change from time to time. 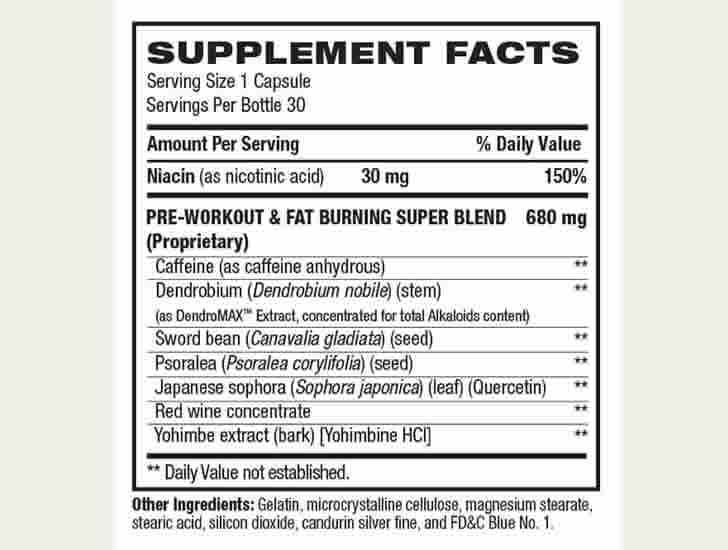 The B4 Thermogenic ingredients formula, as shown on Amazon.com at the time of writing

Let’s now start taking a closer look at the actual active ingredients in the B4 formula.

• Niacin – Also known as Vitamin B3, Niacin is the only ingredient in the B4 formula that is not part of the proprietary blend. This means that we know that there is exactly 30mg of Niacin in each capsule of B4. In case you didn’t know, Niacin contributes to normal energy release and the reduction of tiredness and fatigue, amongst other things.

• Caffeine Anhydrous – You probably don’t need any introduction to this ingredient. Caffeine is one of the most popular stimulants on the planet. Due to the proprietary blend, we do not know the precise dose of Caffeine used. However, a warning on the B4 supplement label says that the recommended serving contains around the same amount of Caffeine you’d expect to find in three regular cups of coffee, so it is clearly a significant amount.

• Sword Bean – This is an extract which comes from the seed of a plant called Canavalia Gladiata, which is in the legume family Fabaceae. Again, we have not seen this ingredient used in many similar supplements.

• Dendrobium – This is another plant extract ingredient that comes from the stem of a plant called Dendrobium Nobile. Once again, this ingredient is included as part of the proprietary blend in B4.

It’s worth noting that B4 is not available to buy in all countries. This may partly be because the ingredient Yohimbe / Yohimbine (which is also part of the B4 formula) is not approved for use in dietary supplements in some countries.

B4 is available to buy in bottles of either 30 or 60 capsules.

As mentioned above, you can buy this supplement on Amazon.com in the USA, and it’s also available from other online retailers such as the official BPI Sports website.

It’s worth checking online for the latest prices, as they can change from time to time.

As we mentioned above, it’s always best to speak to your doctor before taking a new supplement or making any major lifestyle changes.

It’s also very important that you carefully read the entire label of any supplement you’re thinking of taking, including all of the warnings, directions and ingredients.

On the product page on Amazon, there are a few warnings shown about this supplement.

It says that this supplement is not intended for use by persons under age 18, and there is a warning saying not to exceed the recommended dose.

It also says that you should get the consent of a licensed physician before using this product, especially if you are taking medication, have a medical condition, you are pregnant, nursing or thinking about becoming pregnant.

The label also says each serving of the supplement contains around as much Caffeine in about three cups of coffee, and that B4 should not be combined with any other Caffeinated supplements or medications.

The label also says that you should discontinue use of this supplement two weeks before surgery.

The label on Amazon also says that the Niacin in the B4 formula may cause temporary flushing, tingling and skin reddening.

As mentioned above, be sure to carefully check the entire label of any supplement you’re thinking of taking.

The directions shown on the Amazon listing say that as a dietary supplement, you should take one capsule, 20-30 minutes before training, or as directed by a qualified healthcare professional.

You should carefully read the directions of any supplement you purchase, as they may differ from those shown above.

We took a look on Amazon to see what some customers were saying about the B4 Thermogenic.

At the time of writing, this supplement had an average rating of 4.1 out of 5 stars from a total of 497 ratings.

One happy customer left a positive five-star review and said that they were “amazed” by the supplement.

One of the more negative reviews came from somebody who left a two-star rating and said that they thought the supplement was “mediocre” after having used it for a while.

Let’s now weigh up some of the pros and cons when it comes to B4.

Pros:
• Popular brand
• Uses Caffeine Anhydrous as one of its main ingredients
• Can be used as a pre workout

The B4 Thermogenic is a supplement that contains some of the ingredients you’d expect to find in a so-called ‘fat burner’, including Caffeine, and it can also be taken as a pre workout supplement.

If you’re interested, you can check out our updated guide to some of the best supplements in this category by following the link shown below.

As we mentioned above, you should speak to your doctor before thinking of taking any new supplement or making any major lifestyle changes.

It’s always a good idea to stick to a good diet, follow a sensible workout plan and ensure that you’re getting enough quality sleep before trying a new supplement.

It’s also generally best not to view the supplements in this category as ‘magic pills’ that will work without any effort on your part.

That brings us to the end of our look at the B4 Thermogenic supplement by BPI Sports.

We’ve walked you through the key things you need to know about this particular supplement, including the ingredients, the directions and the price.