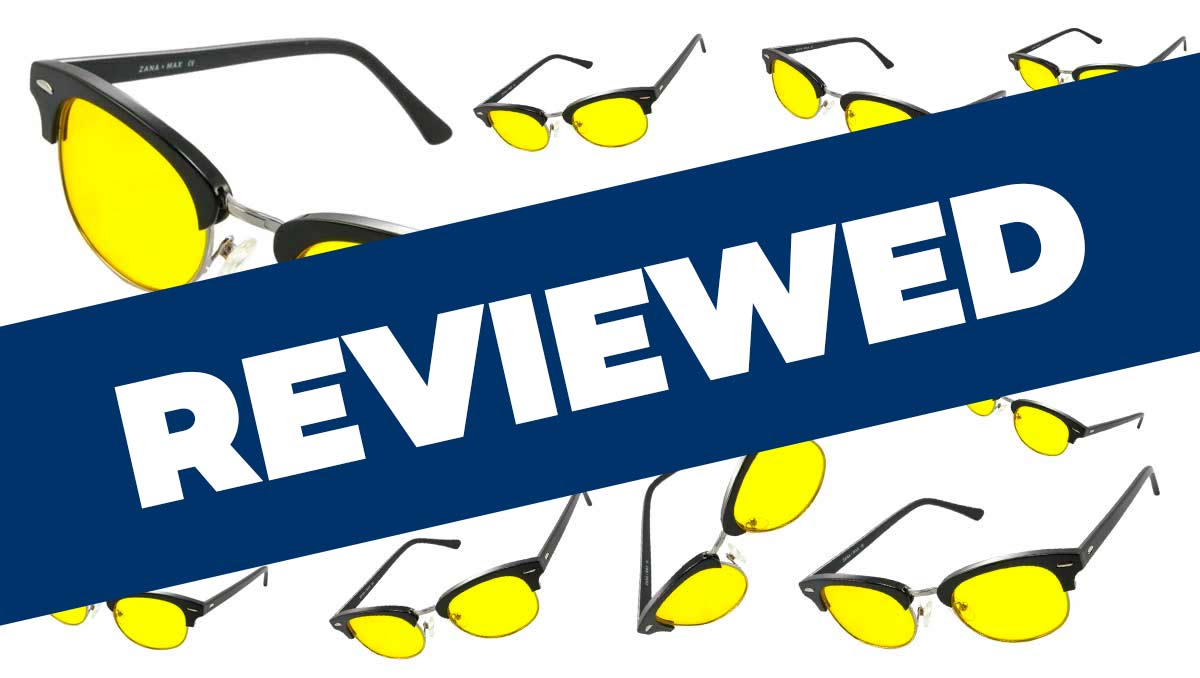 Today we’re going to be reviewing the BLUblox SummerGLO blue light blocking glasses to see where they stand compared to the best blue blockers on the market right now.

We’re big fans of blue light blocking glasses here at The Sport Review, and you may have already seen our review of the BLUblox Sleep+ glasses, which are designed specifically for use just before going to bed.

The SummerGLO lenses are more tailored towards use during the day, and they have been designed to block out the most important frequencies of blue light emitted from artificial sources such as LEDs and computer screens.

The purpose of this BLUblox SummerGLO review is for us to take a detailed look at these particular blue blockers from all angles as we look to see where they stand.

There are lots of different blue light blocking glasses on the market these days but not all of them have the same uses and effects.

We’re going to be paying particularly close attention to the styles and frames, the lenses and what real customers are saying about the BLUblox SummerGLO glasses.

We’ll then wrap things up by giving our verdict and seeing whether they make it into our guide to the best blue light blocking glasses on the market right now.

If you’re specifically looking for glasses to help with sleep, then it may be worth you checking out our dedicated guide to the best blue light blocking glasses for sleep on sale right now.

So, with the introductions out of the way, let’s start taking a closer look at the BLUblox SummerGLO glasses to see where they stand.

As we’ve already mentioned above, the BLUblox SummerGLO glasses are blue light blocking glasses that block large parts of the blue part of the spectrum.

The official BLUblox website describes them as “mood booster” glasses designed to help recreate the look of a summer’s day (hence the product name!). 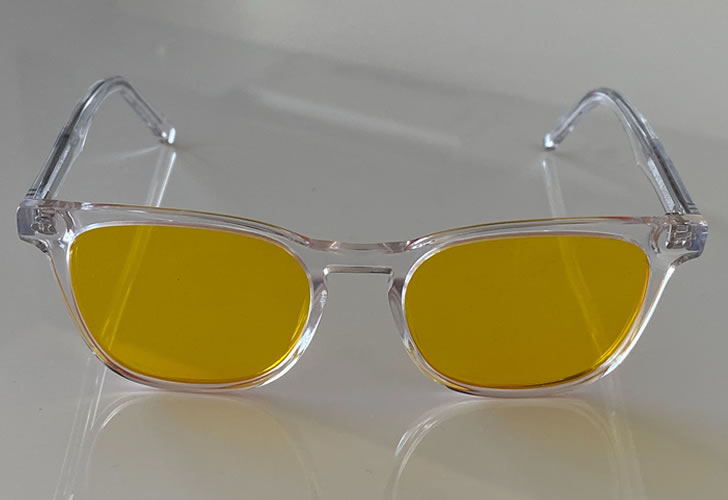 Essentially though, they are simply blue light blocking glasses that are designed for use in the daytime when you are being exposed to artificial light, be it from lighting such as LED or fluorescent lamps, or computer screens and devices.

We’re big fans of the BLUblox Sleep+ glasses here at The Sport Review and they have become an essential part of our nighttime routine.

However, we’ve also been on the lookout for blue blockers that can be used in daytime when the lighting conditions are not ideal.

So, switching back to the SummerGLO glasses, the official BLUblox website says that they have been specifically designed for daytime and computer use.

The SummerGLO lenses block 100 per cent of blue light between 400 and 450 nanometers, meaning that most but not all blue light is filtered out.

Blue light is not all bad, it’s just that seeing it too much after dark is probably not good for our bodies.

The product description on the official BLUblox website says that these glasses have designed specifically to mimic a “warm summer glow”.

It all sounds pretty good so far, but what did we make of the BLUblox SummerGLO glasses after a few days of regular use? Read on to find out.

The Styles and Frames

What’s great about the whole BLUblox range is that they offer the same stylish frames for all three of their lens types.

This means that they have some of the best choice out there when it comes to picking out a stylish pair of blue light blocking glasses to suit your style.

We tried out the Crystal frames, which are made of transparent plastic and reinforced with metal. 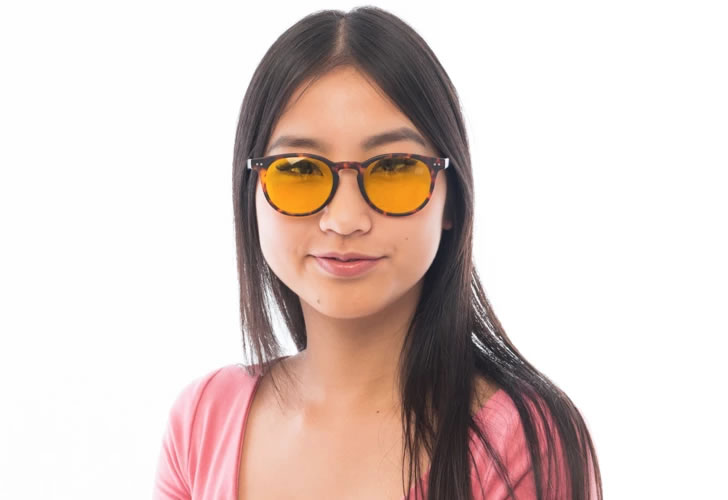 If you’re not too sure about which style is going to suit you best, the BLUblox website is set up in a really cool way, which allows you to check how each frame looks on the same models, so you can get a pretty good idea of how they’ll fit.

There is also a specific size guide, which features all of the dimensions of the frames so you can compare them to a pair of glasses or sunglasses you already own.

BLUblox have a total of 20 different styles, and they also provide a custom blue blocker service, where they’ll transform any glasses or sunglasses into blue blockers. 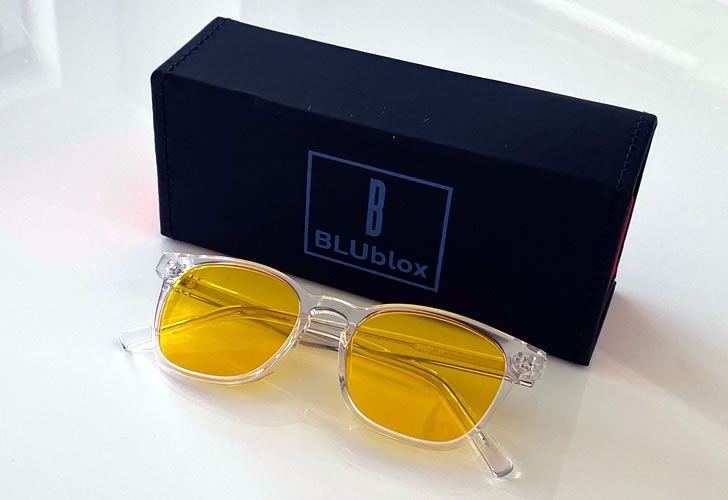 We’re particularly big fans of the Willis and Magnum frames, but it’s suffice to say that BLUblox’s range of styles is unrivalled in the blue light blocking glasses space right now.

Now it’s time to focus on the lenses and the effect of the BLUblox SummerGLO glasses.

The Lenses and the Effect

The first thing you’ll notice about the BLUblox SummerGLO glasses is that they use a very yellow lens.

This is because they have been specifically designed to block out all blue light from 400 to 450 nanometers.

When we tried them on for the first time, we noticed that they seem to let in a fair amount of green light. This means that the overall ‘look’ is a yellowish green tint.

The SummerGLO glasses are designed for use when you’re indoors and under artificial light, and are looking to reduce some but not all of the effects of that ‘fake light’.

We found them particularly useful early in the morning when doing our computer work while it was still dark outside.

Simply put, we found that the SummerGLO lenses are perfect for use indoors, when you’re working under harsh artificial light or for long periods at a computer.

They helped to tone down the harshness of the light and make us feel more comfortable while working at a computer for long periods.

Because of the somewhat unusual green/yellow tint to the SummerGLOs, we didn’t feel like we wanted to use them all day. Instead, we preferred to wear them when necessary when the artificial light exposure was at its worst.

We also found the SummerGLOs to be useful as a lens to be worn in the evening before transitioning to the Sleep+ lens and finally the TrueDark Twilight Classic just before bed. 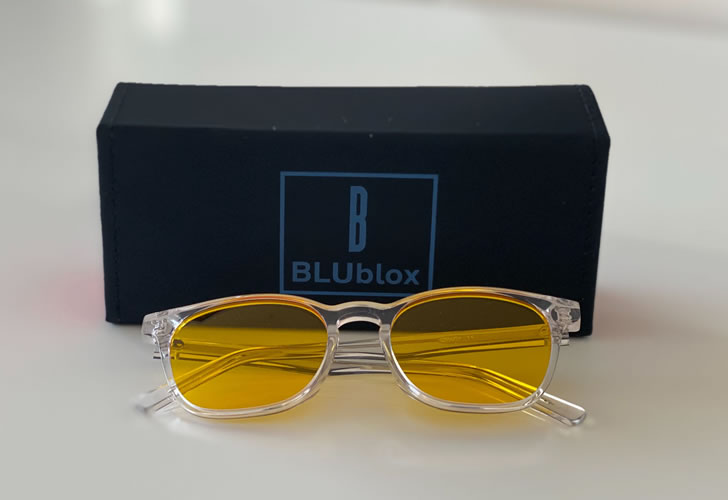 At the time of writing, there was only one review of the BLUblox SummerGLO glasses on Amazon. It was for five stars and from a customer who simply reported that they worked as promised.

There is not a huge amount of customer feedback online right now when it comes to the BLUblox range, but there is plenty of buzz on social media from people who are using them on a regular basis.

• The whole BLUblox range carries a premium price tag. The cheapest glasses in their range cost $104. That being said, you can get a 10% discount off your whole order if you use the code TSR10 at checkout on the official BLUblox website.

• Although there are a couple of styles for sale at Amazon, you can only find the entire BLUblox range on the official website. This means that you won’t find these glasses in the shops or elsewhere online.

Anything Else to Consider?

As with all things in life, you shouldn’t expect to see miracles just by adding blue light blocking glasses into your health regime.

Health begins with a balanced lifestyle and healthy diet. You should always make sure that you’re doing the basics right before thinking about adding in products like this.

It’s also important to note that you should not drive or operate heavy machinery while wearing any type of blue light blocking glasses.

If you’re unsure about the best blue light blocking glasses for you, then be sure to check out our dedicated and detailed guide.

That brings us to the end of our BLUblox SummerGLO glasses review.

Overall, we think that these are some of the best daytime blue blockers on the market. The lenses block out the important frequencies of blue light found in artificial lighting sources, and as with the other BLUblox lenses, there are a host of different frame styles to choose from.

The yellow/green tint may seem a bit unnatural to some people, and that’s why we don’t necessarily recommend wearing them for prolonged periods.

However, we found them to be a really useful tool for blocking out the harshest blue light from artificial sources, and as a ‘transition’ lens before putting on darker orange ones for sleep in the evening.

Overall, the SummerGLO are one of the best options out there if you’re looking for some blue blockers for use during the day.

For more information and to get a 10% discount, visit: www.blublox.com