The Hypervolt 2 is an impressive, quiet massage gun featuring better ergonomic design than its predecessor

By The Sport Review
Updated on Tuesday 10 May 2022 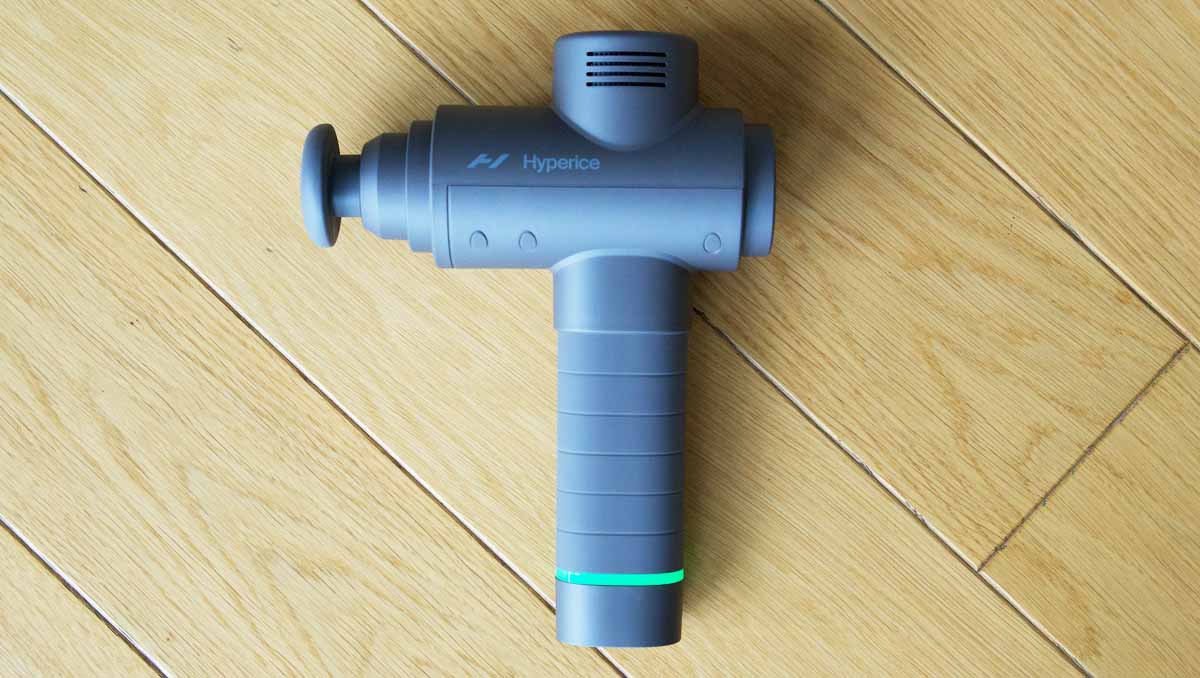 The Hypervolt 2 is the impressive second-generation massage gun made by Hyperice, featuring a lighter body and improved ergonomic design.

The original Hypervolt is one of the best-rated percussive therapy devices on the market and the Hypervolt 2 is likely to garner equal attention thanks to a number of key upgrades in comparison to the previous model.

Priced at £299 in the UK, the Bluetooth-enabled Hypervolt 2 is a premium massage gun that certainly won’t fit into everyone’s budget. But does it live up to its premium price-tag and is it worth considering?

In this article, we’re going to take a close look at the Hypervolt 2 from all angles to see where it stands. We’re going to be paying especially close attention to the key factors, including how effective it is, the battery life, and how much noise it makes.

So, with the introductions out of the way, let’s begin taking a closer look at the Hyperice Hypervolt 2.

The Hypervolt 2 is the original massage gun offering from Hyperice, but featuring some new impressive upgrades on the previous generation of the device.

The massage gun market has exploded in recent years, and there are now more devices than ever to select if you’re looking for a percussive therapy device. 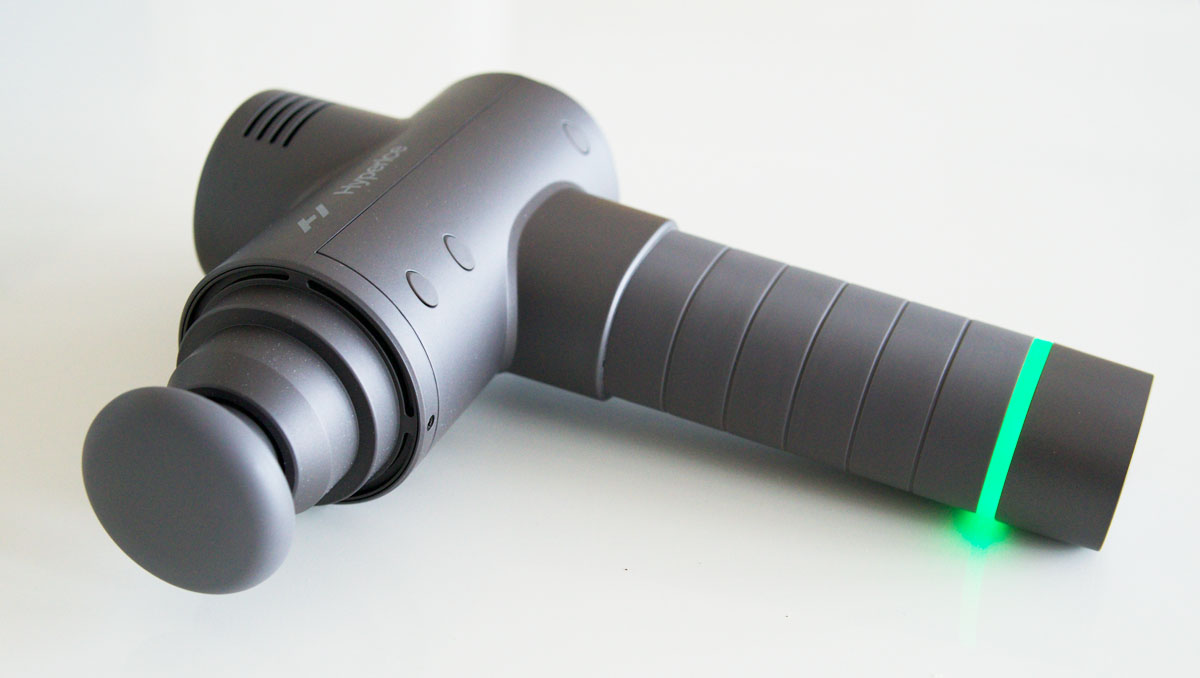 The original Hypervolt is considered to be one of the leading products on the market and is very highly-rated amongst customers, boasting an impressive 4.8 out of five star rating from more than 1,200 reviews on Amazon at the time of writing.

The Hypervolt 2 is the next generation percussive therapy device from Hyperice, and it sits $100 below the premium Hypervolt 2 Pro in terms of pricing. Hyperice have included some impressive upgrades in the second generation model, including a lighter and improved design, plus updates to make it a more powerful device overall.

The device features three speeds of percussion and comes with five different head attachments to suit your needs. It also boasts a three-hour battery life and claims to be TSA approved for carry-on luggage when flying.

The Hypervolt 2 uses a brushless 60-watt motor and also has a pressure sensor so you can keep track of how you’re using the device.

The device comes with a case to store the head attachments in when not in use. However, the device itself doesn’t come with its own case, which is a slight drawback.

There is a ‘premium’ feel to everything about the Hypervolt 2, from the packaging to the device itself. 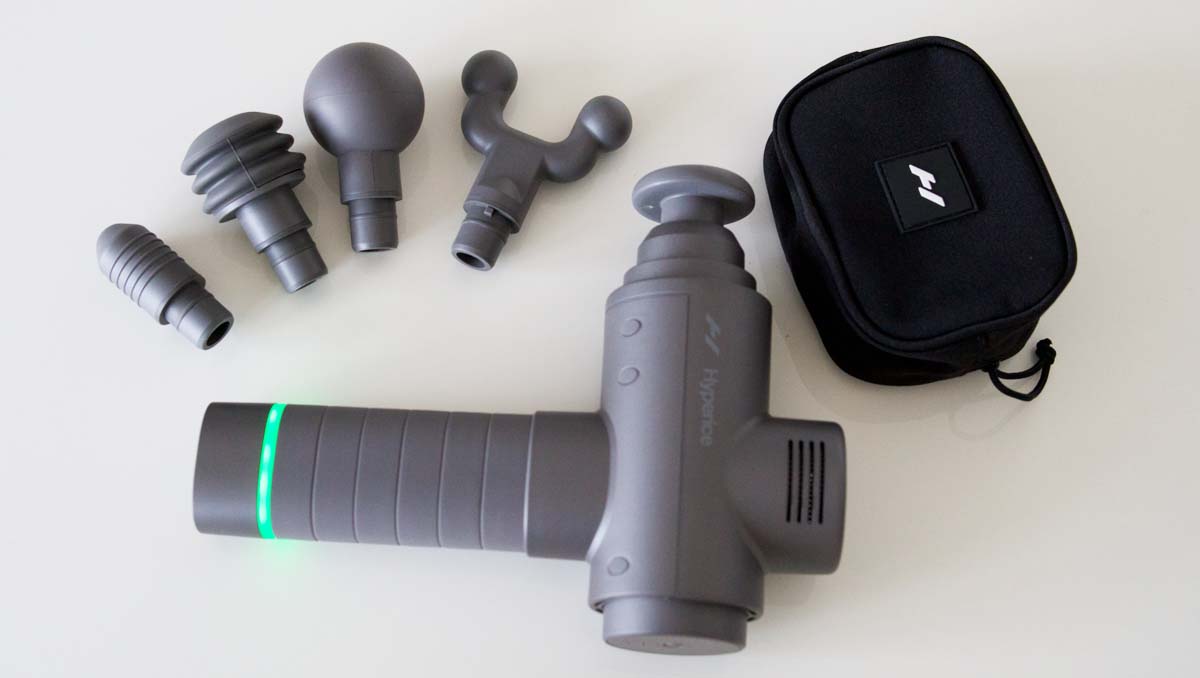 The Hypervolt 2 and its head attachments (Photo: The Sport Review)

The massage gun itself features a grey design and has a sturdy overall feel to it. The head attachments come in a neat carrying case (although we would have liked to see one included for the device itself too) and the charger comes with a range of different socket adapters.

The Hypervolt 2 comes with five head attachments in total, which the same number as the Theragun Elite, to allow you to switch things up depending on the context and the muscle group you are targeting.

The head attachments bundled with they Hypervolt 2 are:

The five attachments feature varying degrees of firmness, making it easy to find the right one for any given purpose.

The Hypervolt 2 is also Bluetooth enabled, and can be connected to the Hyperice App for automated speed control and more. The App also features step-by-step guidance plans for warm-ups and recovery to help you to get the most out of the device.

The three different percussion speeds make it easy to select the best one for you depending on what you’re looking for and which muscles you’re targeting. 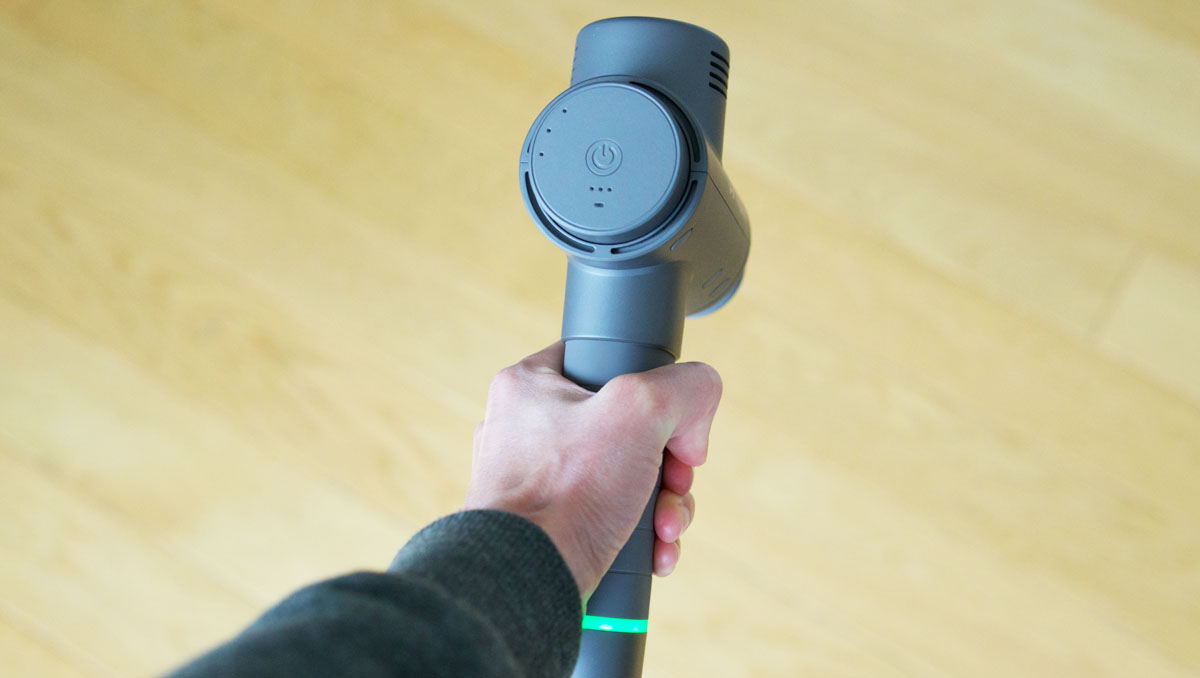 The lowest speed setting has a gentle and fairly comfortable pace to it, while the highest setting packs some serious punch, and it is certainly one of the most powerful massage guns we’ve tested.

Overall, we thoroughly enjoyed using the Hypervolt 2. It is pleasant to use and packs a punch in terms of power despite its relatively small size. Its quiet but efficient motor makes it highly effective for both warm-ups and recovery, and it works well even when more pressure is being applied.

At around three hours, the battery life is good, and overall we quickly felt the benefits of using the device to help ease some of our muscular aches and pains.

The Hypervolt 2 features a brushless “high-torque” 60-watt motor which powers the device, and the gun also boasts patented QuietGlide tech to help keep the noise down. 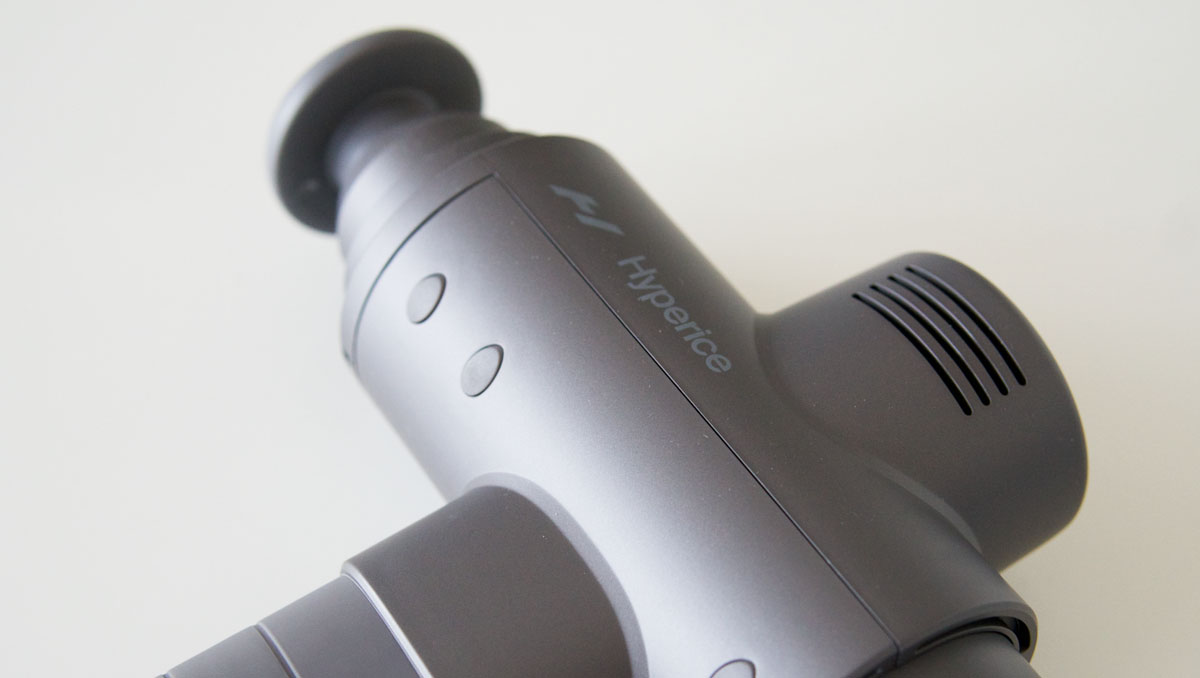 One main issue when selecting a massage gun is how loud it is when being used. The noise isn’t usually a problem if you’re using the device at home, but if you’re taking it out and about, you may want to go for a quieter product that isn’t going to cause any disturbances.

We found the Hypervolt 2 to be pleasantly quiet during use, and it is definitely one of the quieter massage guns we’ve tried when operated at the minimum speed.

Of course, the device does emit more sound when ramped up to the higher percussion speeds, but overall we were pleasantly surprised by how quiet the device is, and that’s a major plus point for this product.

There is no getting away from the fact that the Hypervolt 2 is a premium-priced product, and it therefore may not fit into everyone’s budget.

The Hypervolt 2 is readily available to buy online, and you can either get it from the official website, or from Amazon in the UK.

It’s worth checking both Amazon and the official website for the latest prices, as they may change from time to time.

The Hypervolt 2 was only launched in September 2021, and so as it’s a relatively new product at the time of writing, there are fewer customer reviews online compared to the first generation model.

That being said, at the time of writing, the Hypervolt 2 had an average rating of 4.7 out of five stars on Amazon UK from a total of 191 ratings, so it’s fairly clear that it’s been well received amongst customers.

On the official Hyperice website, the Hypervolt 2 also had an average rating of 4.7 out of five stars from 12 reviews at the time of writing. 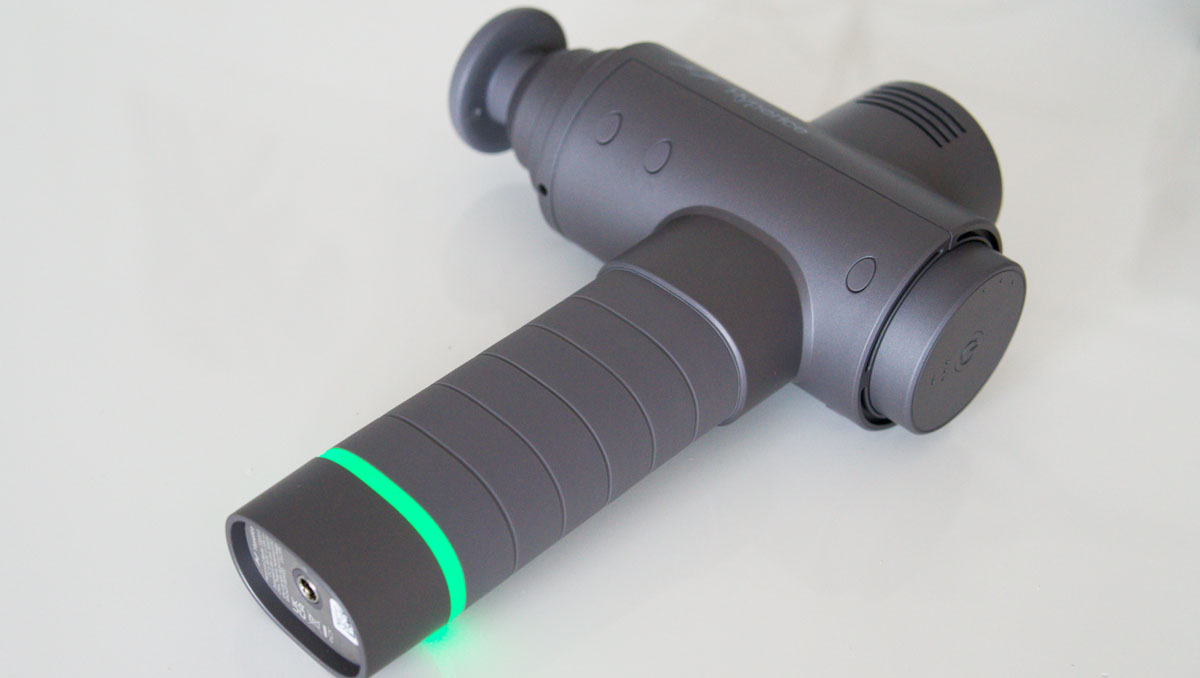 Let’s now take a look at some of the overall pros and cons of the Hypervolt 2.

Cons:
• No carrying case for the device (one is supplied for head attachments only)
• Switching the power connections for different countries on the charger can be a bit fiddly

Although massage guns can be an excellent addition to help with warm-ups and recovery, it’s important to remember that they are not medical devices. If you have or suspect a medical problem, you should speak to your doctor.

It’s also worth noting that massage guns, although undoubtedly useful, are unlikely to provide the same level of personalised expert treatment and advice you’d expect to get from visiting a physiotherapist in person. 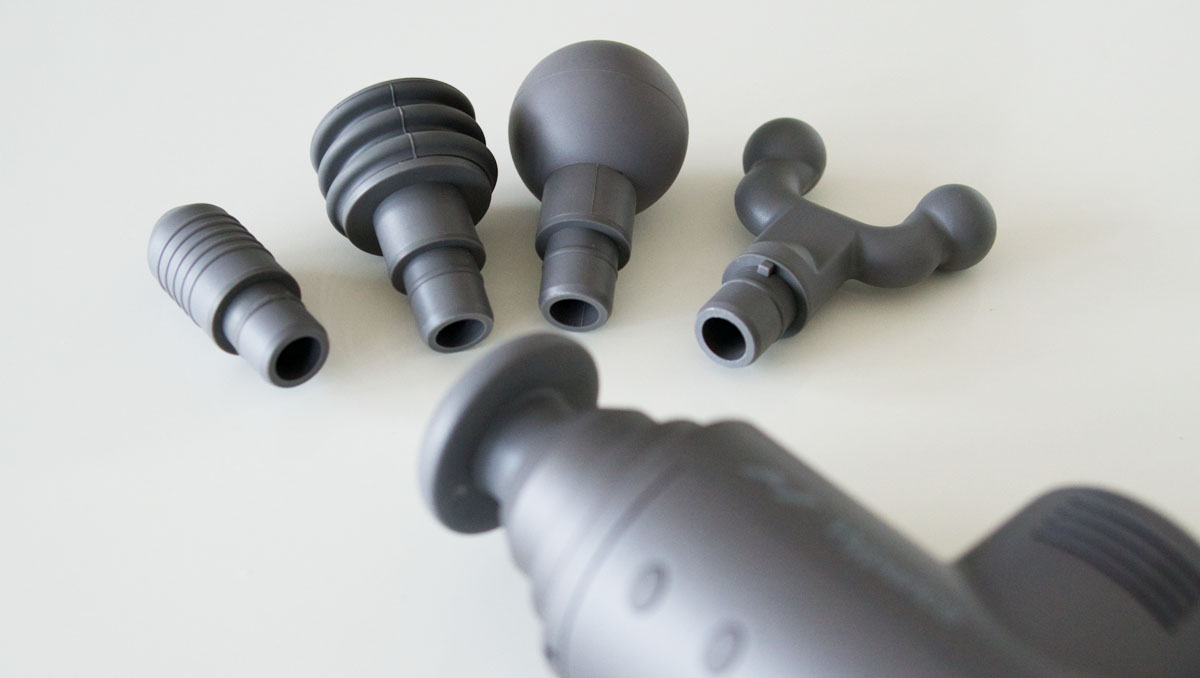 So, that brings us to the end of our Hypervolt 2 review.

Overall, we were very impressed by this massage gun. Yes, it does carry a premium price tag, but it’s quiet, well-built, effective, and comes from a reputable brand.

One of the slight drawbacks is that it doesn’t come with a carrying case for the device itself (there is case for the head attachments only).

But if you’re looking for a high-quality massage gun with proven quality and from a trusted brand, the Hypervolt 2 is a great option.