We take a close look at the QuadraLean Non-Stim supplement by RSP Nutrition, paying close attention to the ingredients and doses

By The Sport Review
Updated on Tuesday 22 December 2020 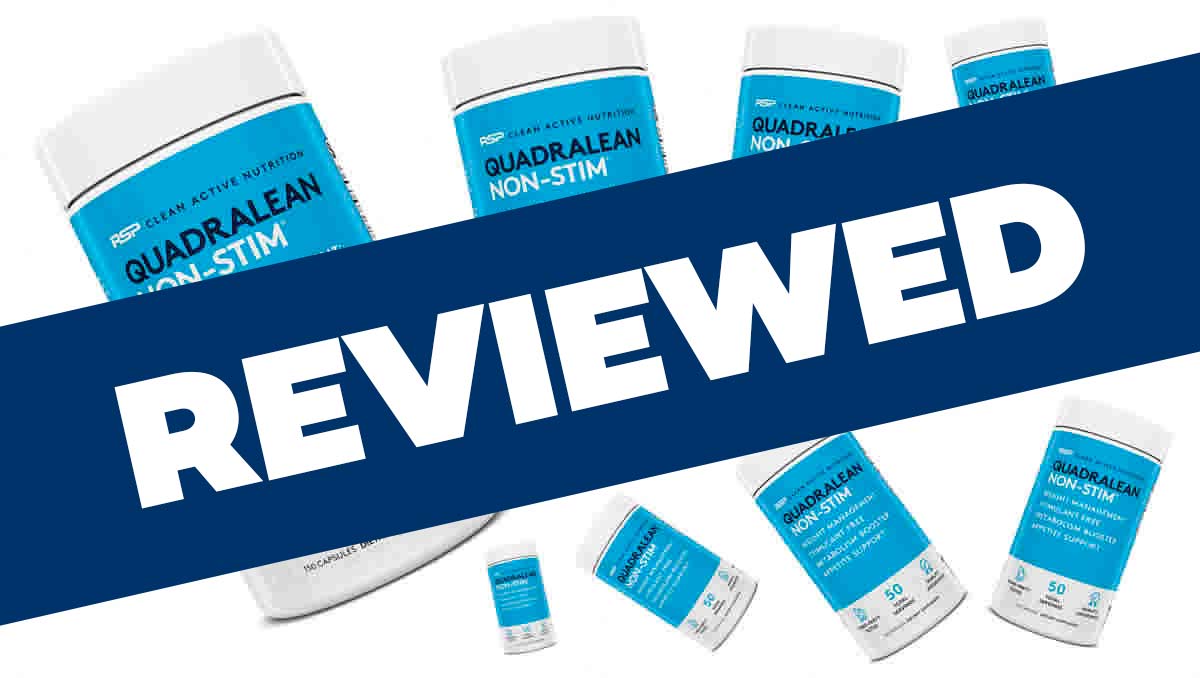 QuadraLean Non-Stim is a supplement made by RSP Nutrition which has been formulated to help support you on your health and fitness journey.

It’s available to buy online from websites such as Amazon, and it contains a range of inclusions including minerals and plant extracts, without using pure Caffeine as one of its standalone active ingredients.

Before we start taking a close look at QuadraLean Non-Stim, we want to make a couple of important points about the supplements in this category.

So-called ‘fat burner’ supplements are not ‘magic pills’ – and they are generally not proven to ‘burn’ fat on their own.

The purpose of this article is for us to take a detailed look at this supplement from all angles, paying particularly close attention to the QuadraLean Non-Stim ingredients formula and their doses.

So, with the introductions out of the way, let’s start taking a closer look at the QuadraLean Non-Stim supplement in a bit more detail.

As we have already mentioned, QuadraLean Non-Stim is a low-stimulant supplement that’s been designed to help provide some support on your health and fitness journey.

It’s made by a brand called RSP Nutrition, who also make the QuadraLean Thermo supplement, which does have Caffeine in its formula.

You may already know this, but most of the supplements in this category contain at least some Caffeine in their formula. However, out of personal preference or for other reasons, some people may prefer a product without any of the stimulant in their formulas.

QuadraLean Non-Stim is available to buy on Amazon in the USA and from some other online outlets, including the official RSP Nutrition website.

The listing on Amazon.com describes the supplement as a “stimulant free weight management” product that has been designed to be paired with a healthy diet and lifestyle.

The Amazon product page also says that this supplement uses “scientifically proven” ingredients, each of which has been selected for a supposed benefit.

The product page on Amazon also says that this supplement is suited for both men and women who are looking for a little bit of added support on their health and fitness journey.

On bodybuilding.com, the QuadraLean Non-Stim product page says that this dietary supplement has been designed to be combined with a proper diet and regular exercise and that it provides a “powerful blend” of ingredients.

The QuadraLean Non-Stim supplements comes in a bottle containing 150 capsules, which equates to 50 servings in total.

So, now that we’ve covered some of the basic things you need to know about QuadraLean Thermo, it’s time to focus on the ingredients formula for this supplement.

Let’s begin this part by looking at the actual ingredients label for QuadraLean Non-Stim.

Note that the label shown below was displayed on Amazon.com at the time of writing, but you should always carefully check the label of any supplement you’re thinking of taking, as the formula may differ from that shown below. 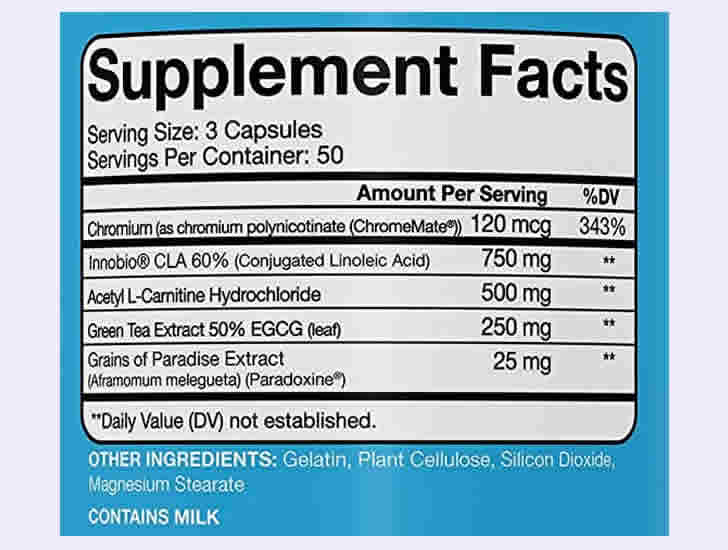 The QuadraLean Non-Stim ingredients formula, as shown on Amazon.com at the time of writing

One of the first things to point about about the QuadraLean Non-Stim formula is that it does not use a proprietary blend. This means that we know the exact doses of each and every ingredient on the label, which is generally a positive thing.

Let’s now focus on some of the main ingredients in the QuadraLean Non-Stim formula.

• Chromium – This is an important mineral that we need to get from our diet. In case you didn’t know, Chromium helps with normal macronutrient metabolism and the maintenance of normal blood sugar levels. Every serving of QuadraLean Non-Stim uses 120mcg of Chromium.

• CLA – Short for Conjugated Linoleic Acid, CLA is a naturally occurring fatty acid found in meat and dairy products. Each serving of QuadraLean Non-Stim contains a total of 750mg of CLA.

• L-Carnitine – This is an amino acid ingredient that is often used in pre workout supplements. Each serving of QuadraLean Non-Stim contains 500mg of Acetyl L-Carnitine Hydrochloride.

The ingredients label of Quadralean Non-Stim says that this supplement contains Milk.

Because QuadraLean Non-Stim uses Gelatin for its capsules, it means that this particular supplement is not suitable for Vegans or Vegetarians.

As mentioned above, you can find QuadraLean Non-Stim available to buy online at outlets such as the official RSP Nutrition website, bodybuilding.com and Amazon.com.

One bottle containing 50 servings currently costs around $26 from bodybuilding.com.

You should carefully read the entire label before taking any new dietary supplement, including all of the directions, the warnings and the ingredients.

The directions for QuadraLean Non-Stim were shown on bodybuilding.com at the time of writing, and they said you should take three capsules on an empty stomach twice daily.

The same directions also said that for best results, take 30-60 minutes before meals with the first serving before breakfast and the second serving before exercise.

There is a warning saying never to take more than six capsules in any 24-hour period.

It’s always best to speak to your doctor or a certified medical professional before taking any new dietary supplement.

As mentioned above, you should also carefully read the entire label of any supplement you’re thinking of taking before using it.

The warnings for QuadraLean Non-Stim shown on bodybuilding.com said that the supplement is for adult use only, and that you should not use this product if you are pregnant or lactating.

As mentioned above, it’s better to be on the safe side and speak to your doctor before taking a new supplement.

We took a look on Amazon to see what some customers were saying about QuadraLean Non-Stim.

At the time of writing, this product had an average rating of 4.2 out of 5 stars from a total of 979 reviews.

One happy customer left a five-star rating and said that they were pleased with the supplement and that it was “effective” for them.

One of the more negative reviews came from somebody who rated QuadraLean Non-Stim two stars and said that they felt that the supplement didn’t work for them.

As we have mentioned above, it’s always generally best to speak to your doctor before taking any new dietary supplement, and you should read the entire label of any product you’re thinking of trying.

It’s generally best not to regard supplements as ‘magic pills’ that will work without any effort on your part.

Ensuring that you are sticking to a good diet, following a sensible workout plan and getting plenty of restorative sleep are three key things you can do to support good overall health.

QuadraLean Non-Stim is a low stimulant supplement that contains a range of ingredients including the popular Chromium and Green Tea Extract.

If you’re interested, you can check out our updated guide to some of the leading supplements in this category by following the link shown below.

That brings us to the end of our detailed look at the QuadraLean Non-Stim supplement made by RSP Nutrition.

We’ve walked you through some of the key things you need to know about this supplement, including the ingredients, their doses, the directions and more.

QuadraLean Non-Stim uses a clear and simple ingredients formula made up of five active ingredients, each of which may help to offer some support on your health and fitness journey.