We tried out the Theragun mini, the smallest, lightest (and cheapest) massage gun in the Theragun range of products

By The Sport Review
Updated on Wednesday 8 June 2022 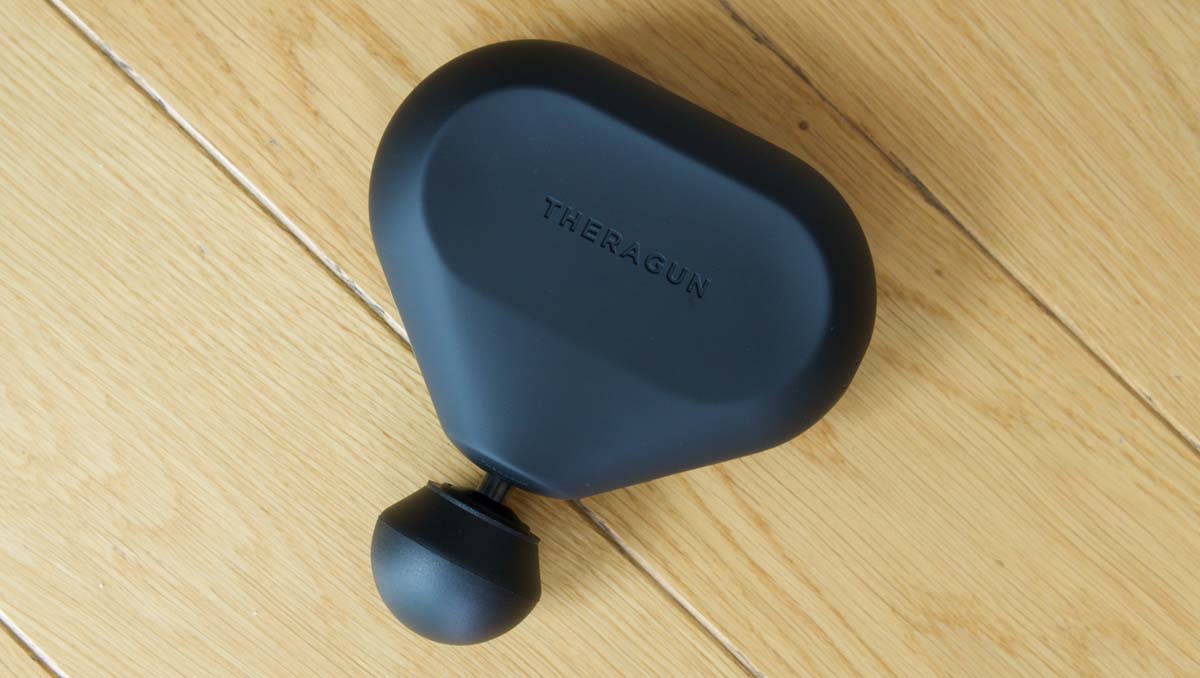 The Theragun mini is the smallest and lightest massage gun in the Theragun range and has been designed with ultimate portability in mind.

It weighs less than one kilogram and has been engineered to offer high-quality percussive therapy while you are travelling or out and about.

It boasts an impressive battery life and features a different design to Theragun’s flagship triangular offering, which is a key feature of their other massage guns including the Theragun Elite, which we recently reviewed here on the site.

The massage gun market has exploded in recent years, and there are loads of different products to choose from. However, the Theragun mini stands out from the crowd a little bit as a more portable option, which also boasts a unique design.

In this review article, we’re going to take a detailed look at the Theragun mini from all angles, paying particularly close attention to what it’s like to use, how loud it is and whether it lives up to the marketing hype or not.

So, with the introductions out of the way, let’s begin taking a closer look at the Theragun mini in a bit more detail.

As we have already mentioned above, the Theragun mini is the smallest and lightest percussive therapy device in the Theragun range of products.

You’ve probably already heard of Theragun as one of the market leaders in the massage gun market, and the Theragun mini has plenty of unique plus points that sets it apart from similar devices. 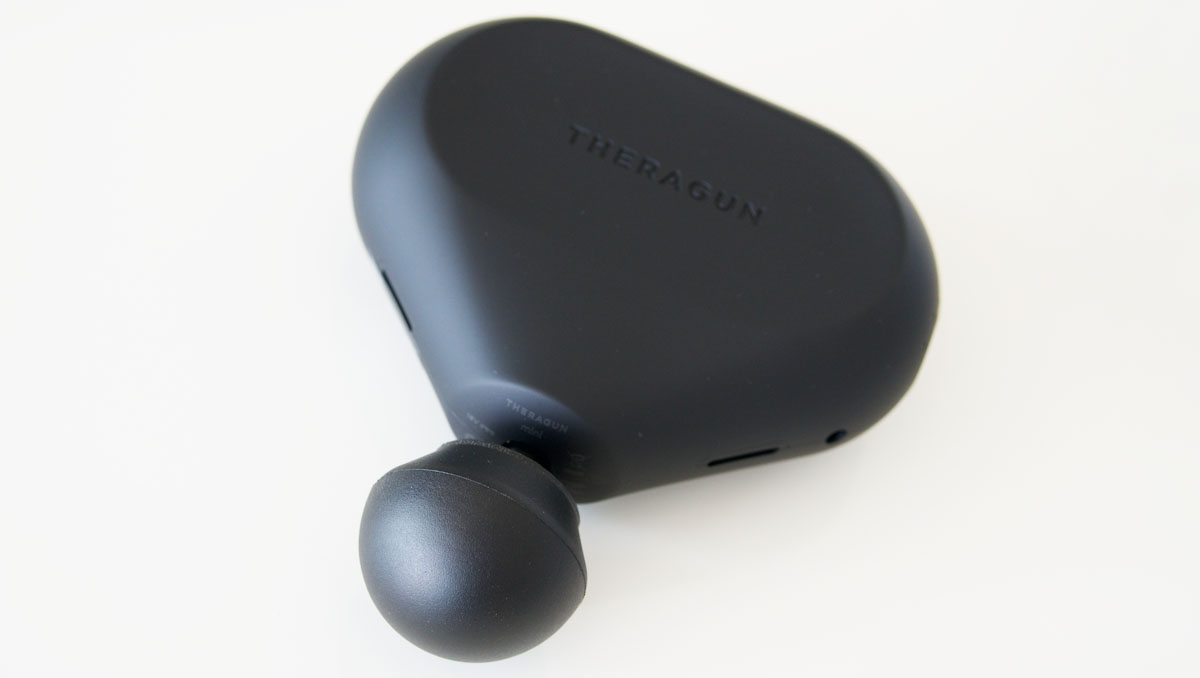 Firstly, it’s been specifically designed with portability in mind. It weighs just 650 grams (1.4 lbs) and is by far the smallest product in the Theragun range in terms of dimensions (it’s 14.7cm wide at its widest point).

It also stands out a little bit thanks to its design, which differs from the triangular make-up of the rest of the Theragun range.

Featuring an ergonomic design, the Theragun mini has been designed to be easily held in your hand, and according to the official website, offers “reduced hand and wrist strain”.

Theragun describe the mini as a “portable massager” which is “compact but powerful” and which aims to be one of the most agile massage devices on the market.

Like the other products in the Theragun range, the mini uses a brushless motor featuring QuietForce Technology. This means that the mini operates at a level that is “quiet for any setting” according to the official Therabody website.

The Theragun mini, like its more expensive brothers and sisters, also features Active Torque Control, which helps to maintain consistent depth and speed when pressure is applied.

Priced at £175 or $199, the Theragun mini is considerably cheaper than the other devices in the range. Of course, there are a few things missing compared to its more expensive sister products.

The Standard Ball attachment which comes with the Theragun mini is removable, however, so you could opt to add other attachments at a later date should you so wish.

The Theragun mini also doesn’t feature any kind of display, unlike its counterparts. This means that things such as the precise battery level and percussion speed are not easily visible. 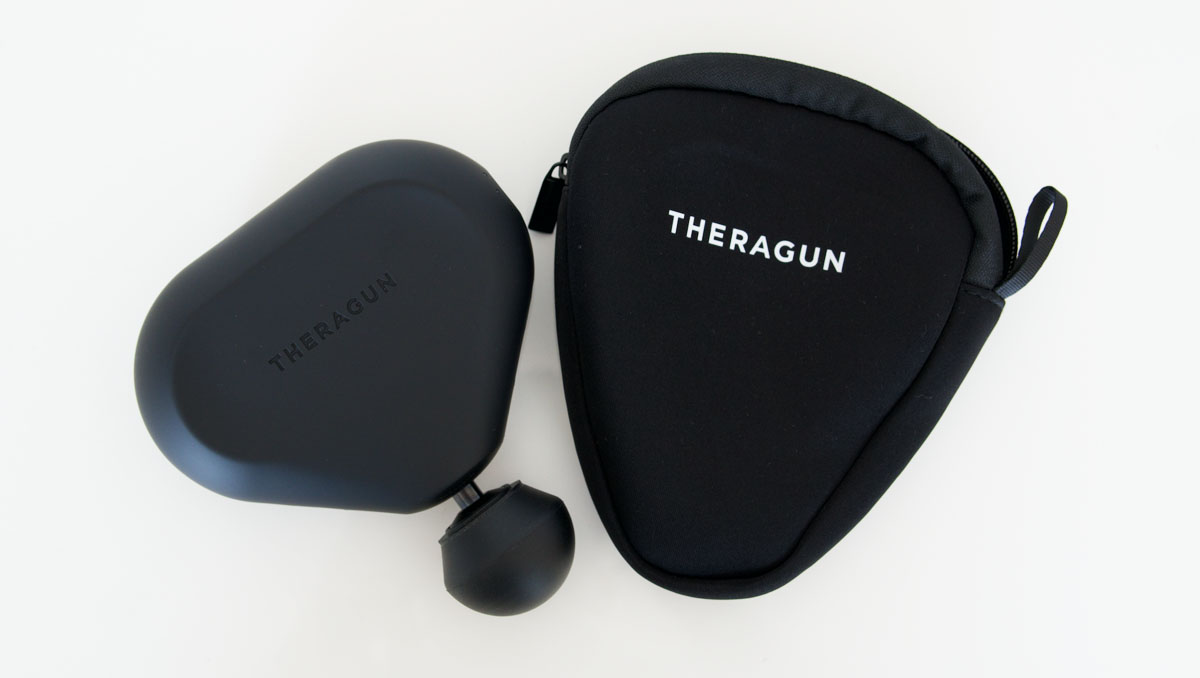 The Theragun mini comes with a travel pouch (Photo: The Sport Review)

The device also features three built-in speeds (1750, 2100, 2400 PPMs) which can be accessed at any time, directly on the device. There is no option of speed customisation between these ranges, which is the case with the PRO and the Elite.

The Theragun mini, which boasts a 150-minute total battery life, also comes with a neat carrying pouch, making it easy for you to throw it into your bag as you head out of the door.

The device has a sturdy and quality feel to it, and one of the first things we noticed was how small the Theragun mini actually is. It’s by far the smallest massage gun we’ve tested out, making it a great option for those looking for a portable device.

Operating the device is fairly straightforward. There is a circular power button on the site of the device, with three white LEDs to the side of it to indicate the percussion speed.

There is also a blue LED in the centre of the power button which indicates that the power is on or that the device is being charged. The LED also changes colour (from red to green) to indicate the current battery level. 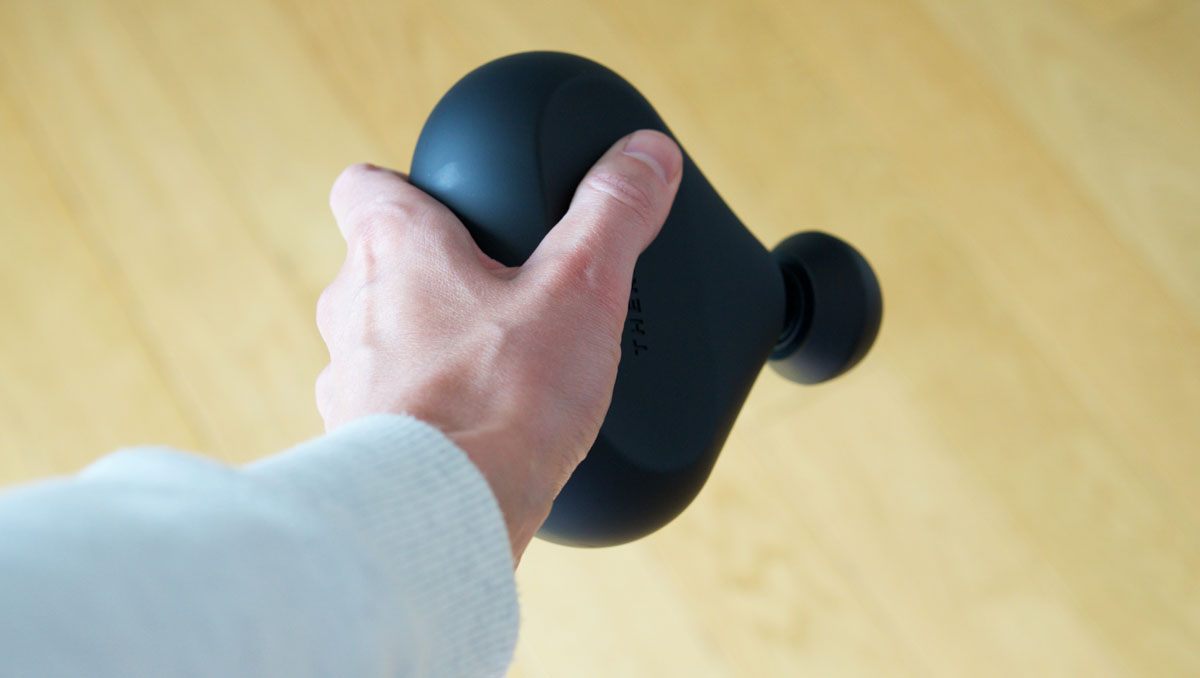 Using the device for the first time is a pleasant experience. You need to simply hold down the power button and select your desired speed before putting the device into action.

We found the Theragun mini to be surprisingly powerful for such a small device, and we really did not notice a huge amount of difference with regards to the quality of the percussion from other more premium-priced massage guns we’ve tested out recently.

Choosing a massage gun that doesn’t make too much noise is important to some people. Noise may be more of an issue for those looking for a more portable device such as the Theragun mini, as they may perhaps be set to use the product out and about more often.

Of course, the noise the product emits does increase as you move up the speeds, but that’s to be expected. 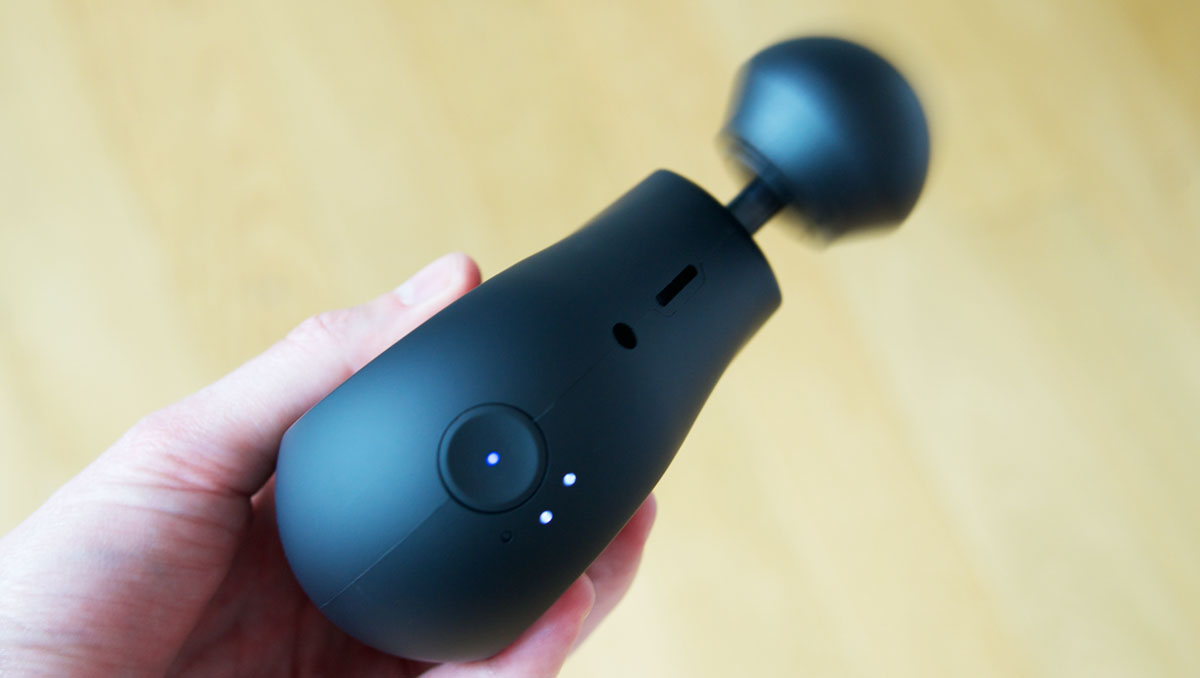 The Theragun mini is the cheapest product in the Theragun massage gun range and, at the time of writing, costs £175 or $199.

You can get the product directly from the official website at www.therabody.com, and it’s also available to buy on Amazon in both the UK and the US.

The Theragun mini is also available to buy from a select number of other retailers.

Additionally, if you’re buying in the USA from the official website, Theragun offer a 60-day trial. Check the official Therabody website for the full terms and conditions.

At the time of writing, the Theragun mini had an average rating of 4.7 out of 5 stars on Amazon from a total of more than 380 global ratings.

One positive review came from a customer who said that the device had helped them to deal with their back issues, describing the Theragun mini as a “great find”.

Another five-star review came from somebody who described the Theragun mini as a “fantastic” piece of kit, saying that it’s a great option to help with general aches and pains. 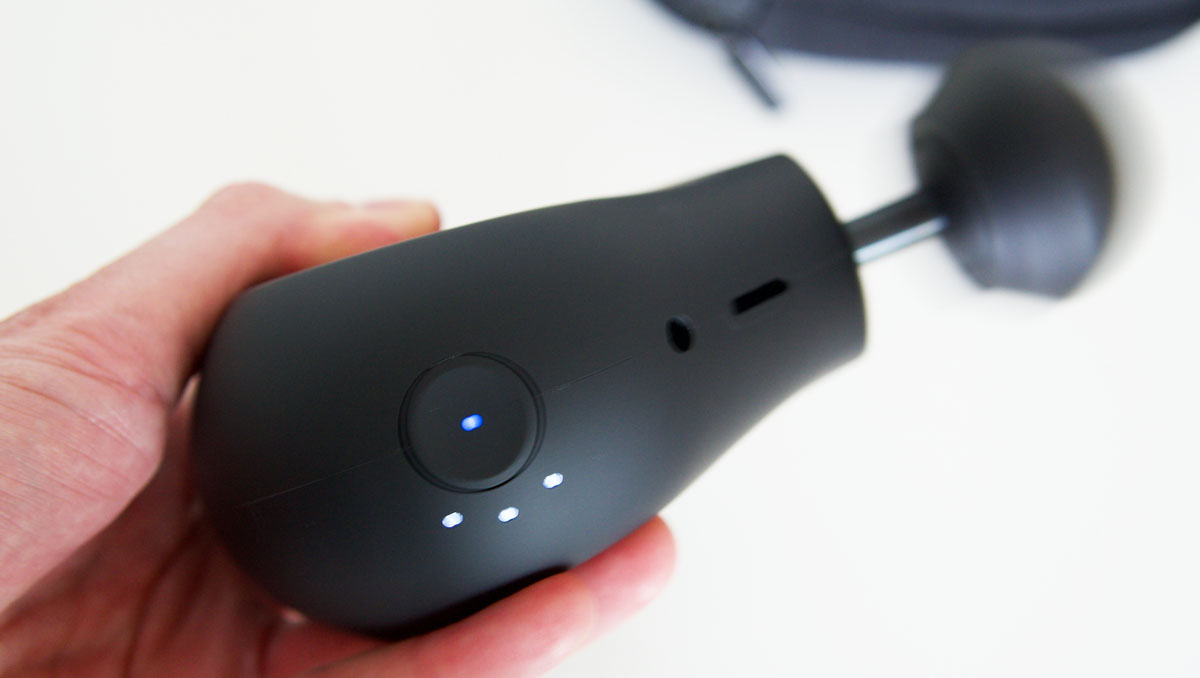 The Theragun mini in action (Photo: The Sport Review)

Let’s now take a look at some of the pros and cons of the Theragun mini.

Pros:
• Cheapest device in Theragun range
• Quiet and powerful
• Portable and comes with a carrying case
• Easy to use

Cons:
• Only comes with one head attachment (you can buy more separately)
• Has only three speed settings that cannot be changed 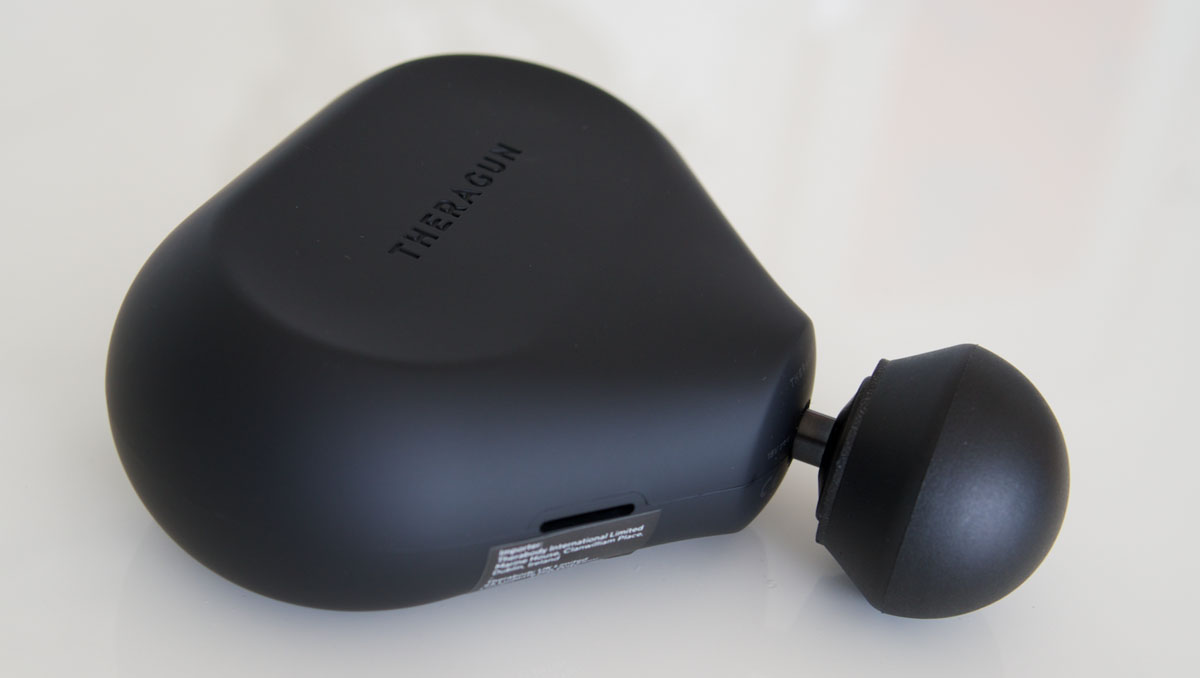 Be sure to carefully read all of the instructions that come with the product before using it for the first time. This will help you to operate it in a safe way, and also ensures that you’ll be able to get the most out of it.

Massage guns and percussive therapy devices are generally designed to help with warm-ups and recovery, and so they shouldn’t be treated as medical products. If you have any concerns about your health, you should speak to your doctor.

So, that brings us to the end of our Theragun mini review.

All in all, we were highly impressed by this small and portable massage gun. It’s quiet, packs a lot of punch for such a small device, and is made by one of the market leaders.

It’s a great option if you’re looking for an affordable and portable percussive therapy device, and it would also suit those looking to purchase their first massage gun.