In this review, we take a close look at the Thule Urban Glide 2 running stroller to see if it can last the distance 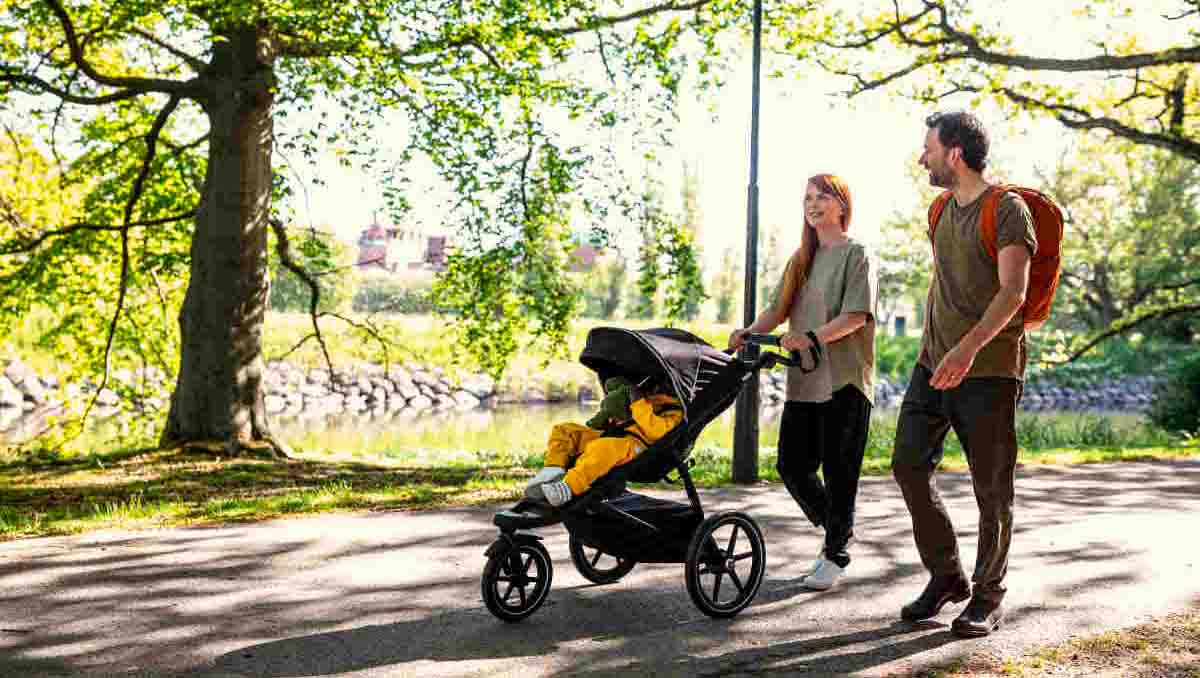 Are you looking for a jogging stroller?

If you’re a new parent or an expecting parent who likes to run, you’ll probably be familiar with the concept of a running pram.

They’re designed to provide a comfortable experience for the parent jogging and a seamless ride for the very important passenger in the pram seat.

You may be surprised by the number of options within the jogging stroller market as lots of companies look to cater to parents who are fitness enthusiasts.

In this article, we’re going to take a close look at one of the leading running prams available on the market at the moment – the Thule Urban Glide 2.

Where To Buy: amazon.com

We’re going to take a close look at this jogging stroller, including some of the key features, the pros and cons, what customers are saying and give our verdict on this nifty piece of parenting gear.

So without further ado, let’s take a closer look at the Thule Urban Glide 2.

Thule are a Swedish company who have been providing essential and innovative tools for adventure over the past 75 years.

Founded in 1942, Thule have manufactured a series of product designed to empower adventurers, including ski racks, bike carrier, multifunctional trailers and jogging strollers.

Thule’s website explains that their aim is to develop products that meet their four core values of quality, safety, design and being easy to use.

With a Thule Test Center in Sweden, they rigorously test all their products to ensure their high standards are met, using their 25 Thule Test Standards that their website claims far exceed the current ISO standard.

The Thule Urban Glide 2 is just one of their contemporary products designed to satisfy demanding users. Now that we know a little bit more about the company behind this jogging stroller, let’s take a closer look at the running pram itself.

Where To Buy: amazon.com 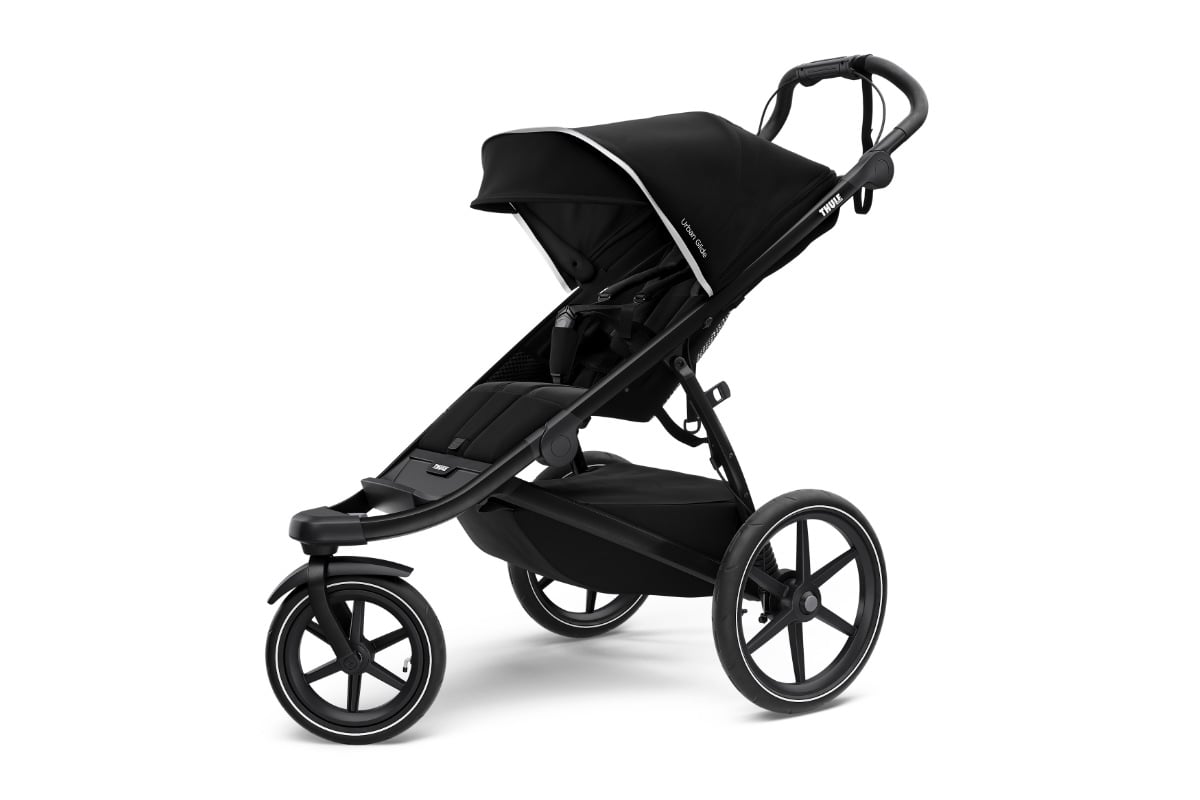 Thule describe their Urban Glide 2 as the ultimate all-terrain stroller.

It has a sleek, lightweight design that makes it pretty easy to maneuver, while the swivel front wheel makes it easy to steer. Thule recommend locking the swivel wheel into place for jogging.

The 16-inch rear wheels are coupled with suspension to ensure a smooth ride for both parent and child irrespective of the terrain. The rims of the wheels have reflectors to provide increased visibility.

Thule have installed an adjustable, ergonomic handle to improve the jogger’s experience of manipulation and steering the stroller. The handle comes with a twist hand brake to provide control around corners and down hills.

The Urban Glide 2 has a reclining seat that is a convenient one-handed recline. The seat is padded with a five-point harness and integrated ventilation to ensure your precious cargo is comfortable and content.

There’s lot of room to store essentials such as a water bottle, baseball cap, keys, smartphone, change of clothes, spare shoes and much more in the large cargo basket with a zip-top cover. Other storage options include a rear mesh pocket and two mesh compartments for smaller items.

It has a one-handed, compact fold for easy storage and transportation. With a weight of 11.5kg, the Thule Urban Glide 2 is relatively easy to take out of the car or remove from the storage shed. 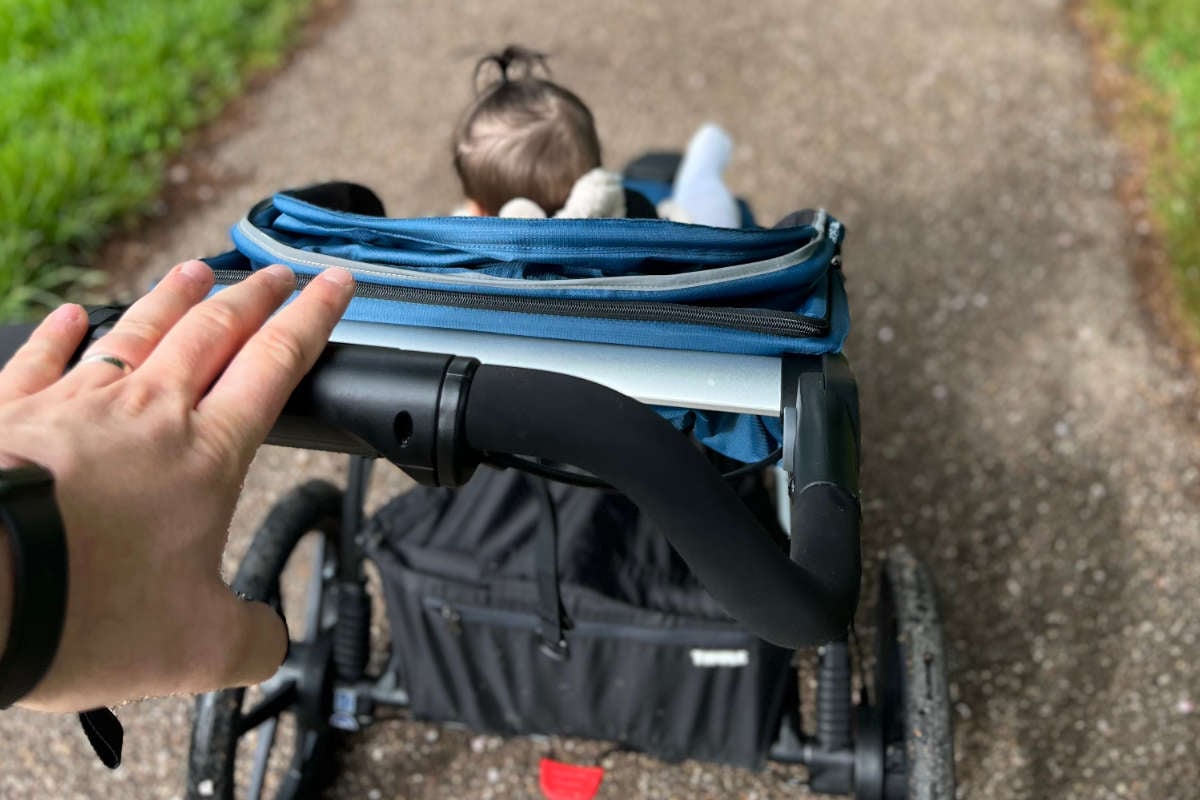 The Thule Urban Glide 2 is the best in class in the jogging stroller category.

If you’re an active parent like me, the Thule Urban Glide 2 can handle jogs or walks on all terrains. I found it to be extremely easy to maneuver thanks to the swivel front wheel. This feature sets it apart from the other running prams that I’ve reviewed.

The integrated twist hand brake was easy to use and offered quick access if required going around a sharp bend or down a steep hill, while the foot break is simple and effective. However, a friend who also owns this jogging stroller found the handbrake’s placement in the middle a bit inconvenient, suggesting a location on the side would have been better. This could be a matter of personal preference.

The Thule Urban Glide 2 has a one-handed, compact fold which makes it easy to store and to transport. The swivel wheel can prove a little cumbersome, though. It would be great if there was a way to pop the front wheel off in the same manner the rear wheels can be removed.

The buttons to remove the rear wheels don’t have an especially pronounced feel and little indication of when they’re sufficiently depressed for the wheel to be removed. On the other hand, they work reliably for both removal and insertion and if the mechanism is good enough for wheelchairs, they’ll surely do here.

A single handlebar adjuster method would be nice. As some parents may be able to relate to, I only ever have one hand free when I realise my (shorter) wife was the last to use the buggy and wanted to adjust the height. This aside, the buttons are functional and offer solid engagement.

Much the same as with other pushchairs, the seat was very easy to let down single handed but requires two hands to push up. It’s secure in any case, and it allows for a good recline which has never failed to send our daughter off to sleep. As with the bar adjuster buttons, a single handed system to raise it up would be a nice touch.

The foot brake is simple, effective and easy. I have only praise for this, including using a series of bends so that the steel wire acts as both the locking pin and spring.

As someone who likes to bring a big water bottle on my run, I appreciated the ample storage options included in the Thule and the velcro allows for quick access.

Having tried multiple jogging strollers, the Thule Urban Glide 2 produced by far the smoothest ride for both parent and baby. It was easy to steer, extremely responsive and provided my daughter with a more comfortable experience thanks to the added padding.

It could have been a good idea to add a little colour to the straps even if was just a grey. It could help pick out the straps against the identical black interior. That the buckle can be connected one side at a time is great, especially with a wriggly child, and differs from other similar systems.

It’s easy to release for an adult but feels stiff enough to be child-proof. The side and back padding appears more than adequate given the number of silent sleeping miles, and the extra mesh pockets are a nice touch.

Although it’s one of the most expensive jogging strollers on the market and there are some design tweaks that I’d like to see, it’s still worth every penny in my opinion. 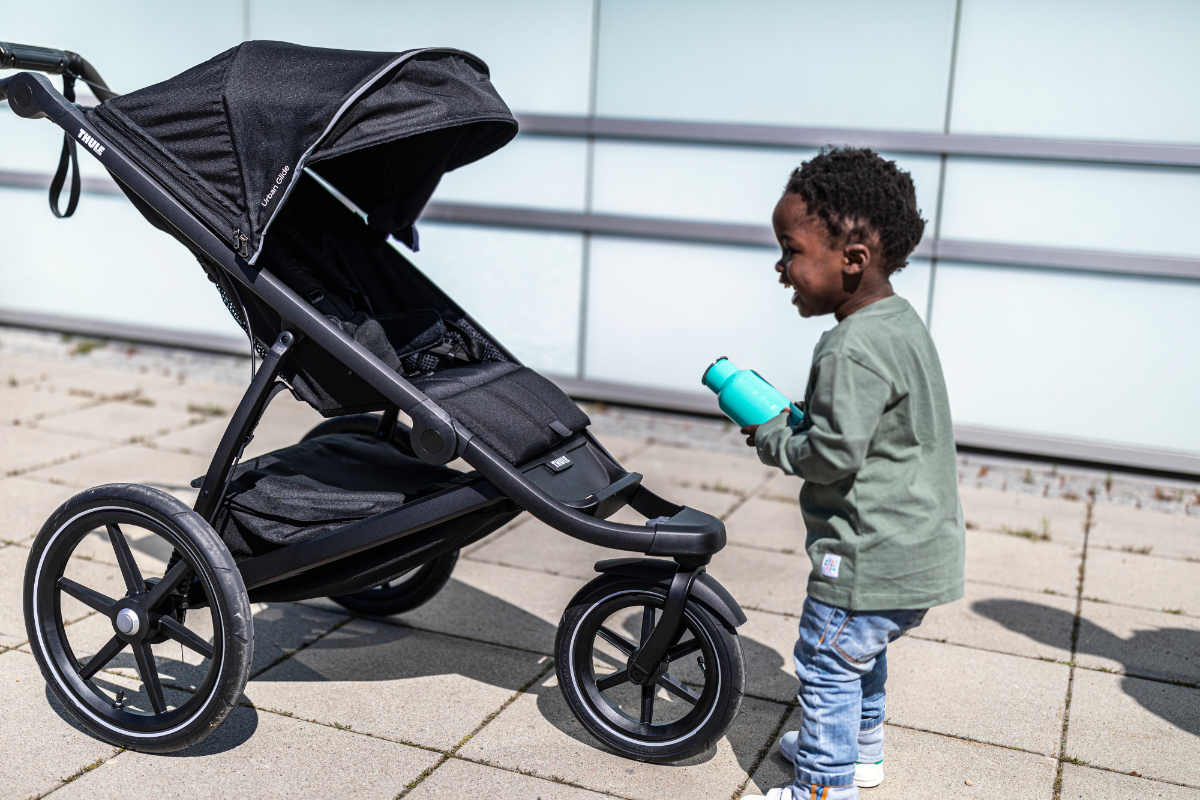 The Thule Urban Glide 2 is priced at £699.00 if you purchase directly from their website.

Readers based in the USA can purchase the Thule Urban Glide 2 on Amazon, where it’s priced at $699.95.

There are some areas of improvement. For instance, to adjust the handlebars, you need to use both hands which can be tricky if you’re multitasking.

I broke the folding catch the first time I took the Thule out of the box (this also happened to a fellow parent with the Thule Urban Glide 2 upon unboxing). This seems to be a design fault as the small part may not be fit for purpose.

Going by the reviews on online review website Trustpilot, Thule do have some work to do with their customer service within the UK.

Wrapping Up – Our Final Thoughts

We’ve reached the end of the Thule Urban Glide 2 review. 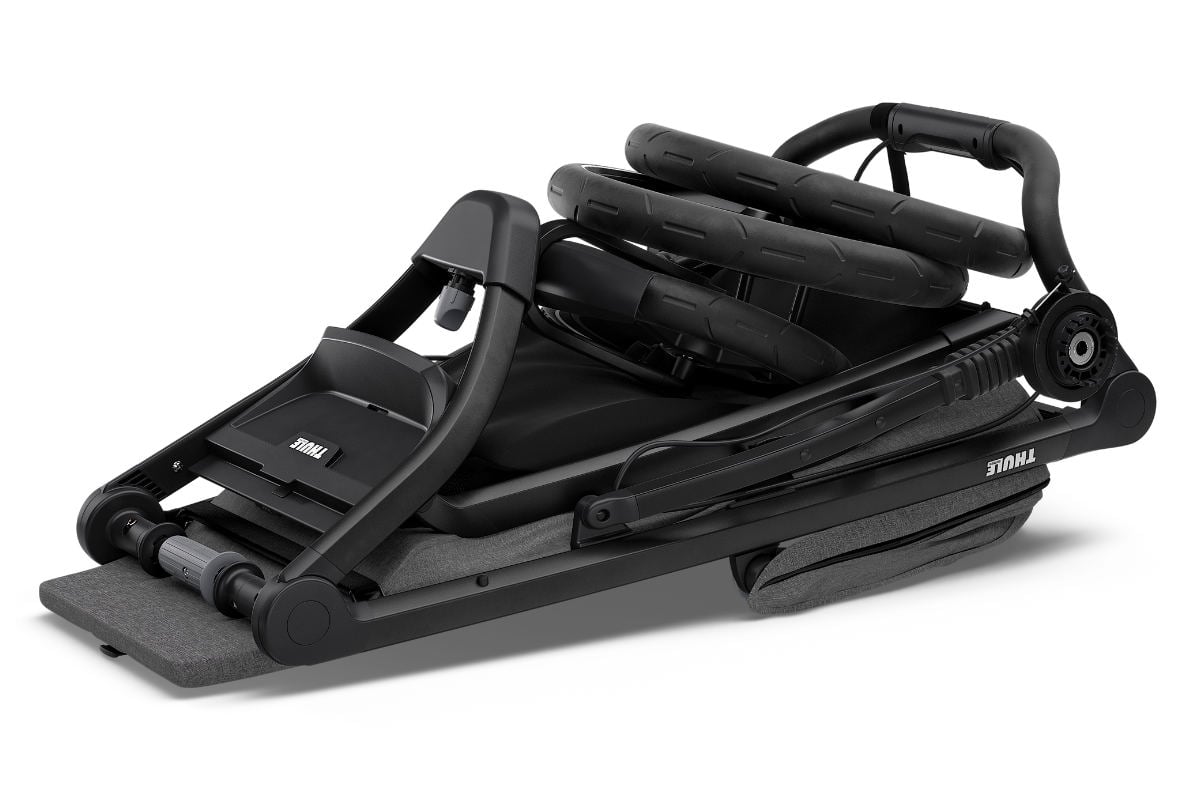 In our opinion, the Urban Glide 2 is the best option if you’re looking for a jogging stroller and you’ve got a sizable budget to spend.

It’s extremely easy to steer thanks to the swivel front wheel coupled with a simple braking system so you can focus on your running technique rather than becoming flustered with trying to control the running pram.

My daughter appeared to be comfortable and content in the padded Thule seat, with the buckle system much easier to use than some of their competitors in the market.

If you’re looking for the best possible running experience with your child, I would recommend the Thule Urban Glide 2 as the best option within the jogging stroller market.