Marianne Bevis looks ahead to the 2012 Madrid Open, where world No1 Novak Djokovic is looking to defend his crown 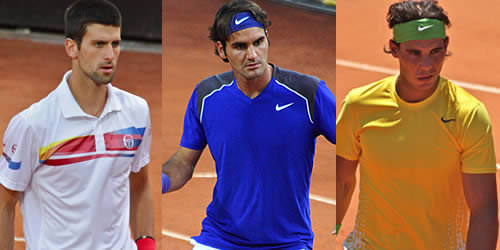 Well it worked. There have been more headlines, more discussions, more debates about the Madrid Open before the tennis even began to satisfy the most publicity-hungry pundit.

There have been events galore: an “official presentation ceremony”, high-profile draws—at least for the women—and seven music “showcases” throughout the week. Add in events for kids and a “virtual Madrid Open” and it’s little wonder that the near-impenetrable website is a frenetic mix that makes finding the basics almost as challenging as playing the qualifying rounds.

But amid homepage headlines about the security company that will make “everything come off without a hitch” and news of special “transport agreements”, the scene-stealer has been a colour. For the switch to blue clay is the latest innovation in the short and boundary-pushing story of the Madrid Masters.

Only since 2009 has this tournament been in May and on clay, arriving at the architecturally-innovative Caja Magica when the calendar was reworked to absorb the Asian swing.

It’s fair to say that, even in its inaugural year, the venue was not universally admired. For all the modernity of sleek metal and show-courts that closed to the elements, the courts themselves attracted early criticism for being hard, uneven and ill-prepared. There were too few practice courts and there were unpopular experiments with a blue clay designed to match the blue-themed venue.

Perhaps the players expected those trials to remain experimental, but they have not. Despite claims that the new colour will improve the visibility of the ball, most players are withholding judgement about how the new surface will play—though a few are already firmly against a break with the terracotta tradition.

But as one player’s coach has already tweeted, the conditions are the same for everyone and, just as in Monte Carlo before it and Rome after it, there are big points—ranking and personal—to be made during this week on the high-plateau of Spain.

The top three men are all present and correct, each a winner in the Magic Box and each winning one of the three Masters played so far this year: Roger Federer was Madrid champion in 2009 and won Indian Wells; Rafael Nadal took Madrid in 2010 and the first clay Masters of 2012 in Monte Carlo; Madrid defending champion Novak Djokovic won the Miami Masters.

But although the field features 16 of the top 20 players, there are some notable absentees. First and foremost, No4 Andy Murray pulled out with a back problem just ahead of the draw. Also missing injured or sick are No9 Mardy Fish, No15 Juan Monaco, No17 Kei Nishikori, No26 Julien Benneteau, No28 Andy Roddick and No32 Robin Soderling.

Perhaps not all title prospects, but nevertheless the Madrid draw has a strangely unbalanced feel to it. Federer and Djokovic are on one side, but it is a distinctly bottom-heavy half. Nadal’s half is more even but, without Murray, he could face any one of at least three men in the semis.

Perhaps, in the end, it will come down to just how hard, slippery, high-bouncing or gritty that untried blue stuff really is.

The top seed opens comfortably against a qualifier followed by one of a pair of left-handers—local man Feliciano Lopez or Austrian Jurgen Melzer—or Stan Wawrinka. Both the Swiss and Lopez were semi-finalists on clay this week but Wawrinka beat the Spaniard in Monte Carlo in straight sets. Neither has beaten the Serb since 2006.

Djokovic’s quarter-final opponent should be either Gilles Simon or Janko Tipsarevic. The Frenchman has beaten Tipsarevic in all four previous meetings, including Monte Carlo last month where he was a semi-finalist, and he also won in Bucharest last week. But Simon, too, has failed to beat Djokovic since their first meeting in 2008.

Unlike Djokovic, Federer could face a sequence of men with reason to believe they could win.

One reason is that he is the only seed apart from Gael Monfils who has played no matches on clay this season. Indeed it has been five weeks since he played any match at all.

Secondly, his first opponent will be either David Nalbandian or Milos Raonic. The Argentine has played Federer 19 times and beaten him in a good few of them. He also reached the semis in Belgrade this week and took some impressive scalps in Indian Wells. But he will do well to hold off the big-serving Canadian who showed that his weapons are effective on clay as well as on hard courts when he beat Murray in Barcelona and took Ferrer to two tie-breaks. Raonic also took the first set off Federer in Indian Wells.

The next round possibly holds Richard Gasquet, who beat Federer in Rome last year and is in the final of Estoril this weekend. Fitness may determine whether Gallic flair gets the better of Thomaz Bellucci, a shock winner over Ferrer in Monte Carlo who also took the first set from Federer in Indian Wells.

The quarters should bring Ferrer to the fore and, though he has not managed a win over Federer in 12 matches, he pushed him to three sets here in 2010 and reached the final in Barcelona where he gave Nadal a thorough testing. Ferrer is arguably playing the best tennis of his life but, if Federer makes it this far, it will take the match of the Spaniard’s life to win.

The world No5 may have escaped the top three in his quarter but he looks destined to meet one of two very dangerous men on his way to his designated spot. In the top segment, John Isner and Juan Martin del Potro head towards a big face-off in the third round and both have shown strong form this spring.

Isner made his Masters breakthrough at Indian Wells, beating Djokovic but losing to Federer in the final. He has gone on to show his clay credentials in Davis Cup wins over France and by reaching the final on Houston.

However, del Potro has won all three of their previous matches, had some good results through the indoor season and also won on clay in Davis Cup. He plays the Estoril final this weekend, too, and has to play a first round in Madrid that Isner escapes—and against an occasionally starry Florian Mayer. That may make the difference when it comes to a quarter-final place.

Matches to look out for: Cilic v Montanes, Round 1; Llodra v Seppi, Round 1; Isner v del Potro, Round 3; Dolgopolov v Tsonga, Round 3.

With his unbeaten Monte Carlo-Barcelona run, and not a set dropped, plus three straight finals in Madrid, Nadal is undoubtedly the man to beat—as long as the conditions are not too different from the clay norm.

He has an interesting opener against Nikolay Davydenko or Ivo Karlovic. The latter has given Nadal difficulties in the past—a final-set tie-break in Indian Wells last year springs to mind—but so far, he has not lost to the huge Croat.

Nadal has, though, lost to Davydenko the last four times they played, but all on hard courts and the Russian has since slid to an eight-year low of 56 this week. It’s hard to see him causing an upset this time should he get past Karlovic.

Nadal’s third-round opponent may be Fernando Verdasco, a 13-time loser to the No2 seed, who won only four games in the Barcelona semis.

Favourite to reach the quarters is Tomas Berdych, who should beat a match-rusty Monfils after some strong matches on clay this spring—two wins in Davis Cup and defeat of Murray in Monte Carlo before taking Djokovic to three sets in the semis.

But Berdych has to go back 11 matches to find his last win over Nadal, and that was on hard courts, though he tested Nadal in a long quarter-final at the Australian Open the last time they played. But this is clay and it is Spain. An upset in Madrid, whether on green, pink, yellow or blue, seems remote.