Marianne Bevis looks ahead to the Madrid Open, where Maria Sharapova will look to upset the Azarenka and Kvitova party 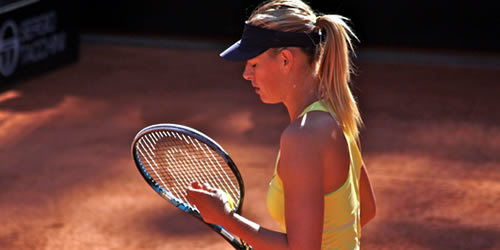 Last year in Madrid, two women who would become the players of the year went head to head in the final.

The winner was Petra Kvitova and it took her into the top 10 for the first time. It marked the third of what would become six titles in 2011, including a first Grand Slam at Wimbledon and the end-of-year WTA Championships, and she went on to lift the Fed Cup for the Czech Republic, too.

The losing finalist, Victoria Azarenka, ended 2011 with three titles but the biggest prizes eluded her. She found herself one spot behind Kvitova in the rankings—at No3—and on the losing end of all three of their 2011 matches.

And yet, come the new season, come a new champion.

Azarenka went on an unbroken run of 26 wins and four titles, including that elusive Slam, the Australian Open. And she has been No1 since the beginning of February.

Conversely, Kvitova’s best result has been the semis in Melbourne and a couple of semi finishes in Stuttgart and Sydney. At Indian Wells, she fell in her second match and in Miami she faced, and lost to, Venus Williams in her first. She now stands at No3 in the rankings.

The woman who currently separates Azarenka and Kvitova at No2 threatened to regain the No1 spot at the end of last year. Maria Sharapova, who first attained No1 seven years ago, won in Rome and Cincinnati and reached the finals of Wimbledon and Miami. But late-season illness and an ankle injury saw her challenge fade.

But you can’t keep a great champion down, and she has taken up where she left off at the start of 2012: runner-up at the Australian Open, Indian Wells and Miami and winner on the indoor clay of Stuttgart last week.

She also happens to be in Kvitova’s half of the draw, and the balance of power between them is writ large in their head-to-head: Kvitova won both their meetings last year, Sharapova won in Melbourne and, more significantly, on Stuttgart’s clay.

Madrid boasts the entire WTA top 10, plus three more former No1s: Venus Williams, Ana Ivanovic and Jelena Jankovic. So who else may disrupt the campaign of the defending champion? And can anyone prevent Azarenka from reaching her sixth 2012 final in seven tournaments?

Despite heading the match-win leader-board this season, 29-2, Azarenka failed to win her last two events.

And the world No1 faces an intriguing, and in places very tricky, draw for her latest campaign. Her opener against Svetlana Kuznetsova is one of them. A former No2, the Russian holds a 4-2 advantage in their previous meetings and has a strong record on clay: She won the French Open in 2009. She also beat Azarenka in their two clay meetings. However, Kuznetsova has slid down the rankings since her last win over the Belarusian in 2009 and won only three games when they met in Indian Wells in March.

Azarenka could face former No1, Ivanovic, in the third round. The Serbian, steadily edging back up the rankings after a couple of years in the doldrums, is at her best on clay: the French Open winner in 2008 and a finalist the year before. It’s two years since these two met on clay, in Rome, and Ivanovic won, but it’s hard to see the more confident Azarenka losing this time.

Azarenka’s quarter-final poses a variety of strong opponents. Venus Williams, a finalist here in 2010, missed last year’s event due to injury and is only playing her third tournament after a seven-month absence with illness. Yet she comes with back-to-back quarter finishes at the Premiers in Miami and Charleston.

She has a tough draw, though. First the fast-improving Simona Halep, then one of the standouts of the last few months, Angelique Kerber. The German is at a career high of No15 courtesy of two titles this year, one the Paris Premier and the other last month in Copenhagen, beating Caroline Wozniacki.

If Williams is to challenge Azarenka in the quarters, she may also have to beat Li Na, who has had a solid though not remarkable season. Last year’s French Open champion lost to Kerber in Indian Wells and to the most likely player to advance in the lower half, Agnieszka Radwanska, last week in Stuttgart.

Radwanska, just behind Azarenka for match wins in 2012, 28-5, has an early test in the shape of Sara Errani in the second round. The Italian is on the longest winning streak on clay since Dinara Safina’s 16 in a row in 2009, won Acapulco and Barcelona, and is a finalist in Budapest as Madrid gets under way.

Thereafter, Radwanska should be untroubled—especially with the exit of Bartoli in the first round—but unless she can find the key to unlocking her most resistant opponent, Azarenka, the popular Pole looks destined to fall in the semis as she has done in all five of their meetings this year.

Sharapova comes into Madrid with the advantage not only of taking the big clay title in Stuttgart last week but also in the knowledge that she turned the tables on Azarenka in their third final this season. Add into the mix that she beat Kvitova in the semis, too, and she is arguably a strong favourite to win this week.

The odds of her taking the No1 ranking may be remote—Sharapova must win the title and Azarenka lose her first match—but what an incentive it gives the Russian to defend her title in Rome and then go for the only Grand Slam title she has not won, the French Open.

Sharapova’s winning record over No15 seed Jankovic suggests her first real challenge will not appear until the quarters, but there the big names come thick and fast.

Serena Williams has beaten Sharapova seven times out of nine, and in their last six meetings—on all surfaces. She brings with her a terrific run to the Charleston clay title: she beat Elena Vesnina, who she meets again in the first round in Madrid, as well as Sam Stosur.

Williams is scheduled to meet Wozniacki in the third round and holds the advantage there, too, though the Dane won in their only 2012 meeting in Miami. However, Wozniacki, really off the boil this season and without a win over a top-10 player, has a difficult second-round draw against Julia Goerges or Mona Barthel.

The face-off between the two Germans is one of the standouts of the first round. Barthel is enjoying a break-through year, won her first title in Hobart, reached the quarters in Paris, Copenhagen and Stuttgart, and rose to a career-high No31 this week. More important for her confidence, though, she beat Ivanovic and Bartoli before only just losing to Azarenka, 4-6, 7-6, 5-7, in Stuttgart.

Goerges, runner-up in Dubai, was a semi-finalist in Madrid last year, beating Wozniacki on the way. However, if Wozniacki makes it past all those obstacles, she still faces a deficit in matches against Sharapova, including a loss in Miami this year.

So Sharapova has her work cut out in a quality section of the draw before she can look to the defending champion in the semis. Kvitova’s obstacles include Sam Stosur, though the Australian will be tested by a second round against either Sofia Arvidsson—a winner in Memphis this season—or Christina McHale. Should Stosur make it past Kvitova—or Maria Kirilenko—in the quarters, though, she will be encouraged by her performance against Sharapova in Stuttgart, where she held match point before losing in the quarters.

Nevertheless, Kvitova has a 3-0 winning record over the Australian so the odds seem to be in favour of another big-hitting showdown between the Czech and Sharapova.