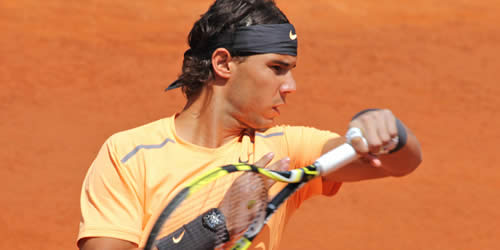 In physical stature he may not be the most gifted: 5ft 9in falls rather short for the ideal tennis player.

But David Ferrer is a man who has not only made the most of every vertical inch but may be the closest thing in tennis to the coiled-spring energy of his friend/foe/compatriot/thorn in the side, Rafael Nadal.

Not for nothing has Ferrer drawn epithets such as “road-runner”, “terrier” or “iron-man” but, as he said this week, it is the last of them he favours:

“I’m not a big fan of “warrior” or “gladiator”. I think they’re a bit simplistic, and not really my style. However, I do like “Ferru.” It’s a mix of my name and the word for iron in Spanish. It means I’m resistant.”

The resilient 30-year-old Ferrer struck the top five in 2007 but considered retirement in 2010 when wins seemed harder to come by and he slipped outside the top 20 for the first time in almost five years. But the iron in the man took him instead to his first Masters final in Rome and then, in 2011, two more Masters finals and only his second Grand Slam semi-final.

Back to the top five by the end of the year, he carried his new-found confidence through Spain’s Davis Cup victory and on to three titles from four finals in 2012. Now, at his 10th attempt, he had reached his first ever Roland Garros semi.

But through his entire career, it has been Ferrer’s curse to stand in the shadow of the younger, taller, stronger and even more resilient Nadal. Nineteen times they had played one another and, in 11 of their last 12, victory had gone to Nadal. Only once, eight years ago in their first ever meeting, had Ferrer beaten him on clay in Stuttgart.

So many times Nadal had deprived his compatriot of a chance for glory—five time in Barcelona, three times in Rome, three times in Monte Carlo—but not since 2005 had they met at Roland Garros. That encounter went Nadal’s way just as both their 2012 meetings had—and there was little to suggest the outcome would be any different in their 20th match.

Nadal’s three clay titles in 2012—Monte Carlo, Barcelona and Rome—had come without the loss of a set, and in Paris the closest he had come to a dropped set was a single tie-breaker in his quarterfinal. Keeping a clean sheet, he went on to record his 50th win on Paris’s clay.

However, Ferrer opened serve strongly, taking the opening game to love in just two minutes. It took another seven minutes before Nadal levelled, forced to defend deuce twice. Both showed how key the forehand would be in taking control of the rallies, and it was a deep, penetrating forehand, finished with a volley winner, that gave Ferrer the first break point of the match. Another forehand earned him a second, but Nadal harried the harrier at the net to hold.

Serving with the wind at his back, Ferrer now faced an opponent growing accustomed to the blustery conditions, and the longer rallies began to go in Nadal’s favour: Four in a row yielded a love break of serve.

With the first strike against serve, Nadal cranked up nine points in a row and the defensive talent of the reigning champion also began to blossom.

Ferrer continued to pound at Nadal’s backhand wing but to no avail. Coming under increasing pressure, he made his first double fault to concede a second service game to love and Nadal served out the set, 6-2.

With Nadal in deep rose pink, Ferrer perhaps felt that he also needed some dazzle in his shoulders. He came into the second set with a change from white to shocking pink and seemed to rediscover the vigour in his right-arm that had started the match so strongly.

However, by the third game, history was repeating. Ferrer did little wrong but Nadal was not for passing. The rally of the match, a 30-stroke spectacular, saw Nadal retrieve a drop-shot on his backside and follow it with an inch-perfect lob that a scuttering Ferrer returned but to no avail. That brought up break point and Nadal pressed home his advantage to force one more error from his hapless compatriot.

With the No2 seed leading 3-1, the iron-grey clouds began to descend over Philippe Chatrier. A gloom descended on Ferrer, too, and errors started to flow along with the rain.

The two men left court with Nadal already two breaks to the good, and an hour later, he carried on from where he had left off. The second set was quickly Nadal’s, 6-2, without a single point dropped on his first serve and only four unforced errors to his name.

Again in the third, it was Ferrer who opened serve but this time he faced break points right from the start at 0-40 down, and a desperate, over-ambitious backhand down the line conceded the game.

Now Nadal was finding the lines with ease, changing direction at will, picking up volleys and returning wide balls to his backhand with interest.

Again in the fifth game, Ferrer faced two break points and a sorry double-fault took Nadal to an insurmountable 4-1 lead. A ripping forehand winner down the line took the next game and a searing cross-court forehand took one more to close out the match, 6-1.

The celebration was muted in the face of a downcast Ferrer, but the nature of Nadal’s win still begged one important question.

Now within a single match of a record seventh Roland Garros title, could one of his remaining foes—be it Roger Federer or Novak Djokovic—stem the tide of the king of clay?