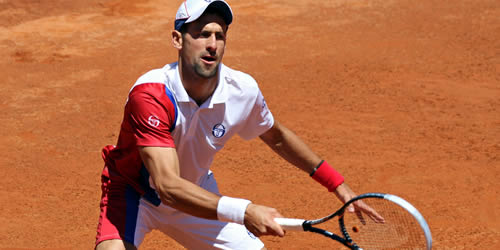 It was Roger Federer’s 50th straight Grand Slam, his 14th straight French Open, his seventh semi-final in Paris as he aimed for his sixth Roland Garros final.

At this year’s culmination of the clay season, he had equalled Jimmy Connors’ record of 31 Grand Slam semi-finals—though he already held the record for consecutive Major semis by a mile. He had reached 237 Major match-wins for the loss of only 35, and this year alone he had won four titles—two of them Masters—for the loss of only four matches.

Yet despite all his achievements and landmarks, the longevity and the consistency, Federer had never achieved what his opponent was attempting to do.

Novak Djokovic had in his sights the chance to become the first man since Rod Laver in 1969 to hold all four Grand Slams at the same time, and the circumstances surrounding his attempt, in the shape of Federer, could not have been more nerve tingling.

At this very tournament and at this very stage last year, Federer had brought to an end Djokovic’s unbroken 2011 41-match run. A few months later, the Serb exacted a remarkable revenge by repeating his 2010 victory over Federer at the US Open, from match points down, again in the semi-finals.

In their 26th meeting, therefore, both sought to avenge painful defeats, and they did so on the back of dramatic, five-set quarter-final wins, achieved at almost the same time with near identical champion-style grit.

The start of their latest meeting was itself tantalising: They were introduced to the Philippe Chatrier crowd, were warmed up and ready to go, but the weather, which played its part throughout the day, sent them packing as the rain fell.

They returned, less than an hour later, to sunshine and gusting winds, and got off to a spritely start apparently unaffected by their broken preparations.

In a high-tempo opening, they struck the ball early and began to make big winners on their forehands. So fast was the gun-fire hitting that, during one rally in the fifth game, the crowd gasped through every strike. Federer concluded the same game with two outright forehand winners to break.

Already what promised to be a pot-boiler of a semi was simmering, especially when, in the blink of an eye and from a 30-15 lead, Federer hit three errors and Djokovic immediately converted a break point back.

Now the Serb decided to change the pace and rhythm by twice ghosting in behind his serve, and he easily held to love. But Federer’s serve and forehand were also rich in winners and he held, too.

So Djokovic turned his focus to the backhand and, with Federer serving at 4-5, the Serb’s eyes opened wide and he sank deep on his haunches, ready to attack. He drew the errors he sought as Federer twice over-hit to offer up two set points. A big Djokovic forehand drew one more error to earn him the set, 6-4.

The stats suggested that Federer had been the aggressor, scoring 18 winners to Djokovic’s 10, but the Serb’s consistency of placement and pace drew 17 errors from the Swiss. Djokovic, for his part, made just three errors in a set of more than 50 points.

The second set began in spectacular fashion, Djokovic streaking to a 40-0 lead on his opening serve before Federer pegged him back with the full gamut of spin and angle culminating in a 36-shot rally that showcased every shot in the tennis book, from drops to lobs to volleys—plus a tweener for good measure. One more cross-court strike from Federer’s racket made the break and he held to love for a 2-0 lead.

More gasps provided the soundtrack to the third game as Federer made a second break, but the infamous Djokovic forehand kicked in with some fearsome winners and, just as quickly, Federer was broken back to love.

With the wind at his back, Djokovic wrenched control and the tennis rushed on in near-breathless fashion. Federer failed to convert yet more break points while Djokovic took his chances to level things at 4-4.

Once more, fortunes swung and Federer took control, breaking in the ninth game with two screaming backhand winners—set-winners had he served first. But yet again, his serve, or perhaps his nerves, let him down. A double fault, a bad bounce on his baseline, an over-hit backhand and a couple of scowls later, and Federer was once more facing break points. Another rash forehand sailed out by a mile and Djokovic, against the odds, had taken the second set, 7-5.

Now the skies turned gun-metal grey to match the bruise-dark shoulders of Federer. The Swiss may have wondered, just as many of those watching must have done, how he had lost two sets in which he had taken early control, how he had led the second for most of its 50-plus minutes and served to level the match, yet found himself two sets down for the second successive match in the tournament.

He may have thought briefly of that quarter-final against Juan Martin del Potro but, if he did, he would have admitted that he had then faced a steadily weakening opponent. This was different.

This time, instead of a streak of wins over the man across the net, Federer carried a streak of five losses from his last six matches against Djokovic, not least a confidence-swelling victory to the Serb in Rome just last month. But with Federer now winning only 40 percent of points from his first serve—a sign both of his own floundering performance and of Djokovic’s pouncing, deep returns of serve—this was an uphill task of the first order.
With his man on the ropes, and that Rome confidence flooding his bloodstream, Djokovic never looked in danger again.

Federer tried, too late, a variation to his unexpected baseline tactics. In the first game of the set, he played a first serve-and-volley point. He tried to attack the net on the Djokovic serve, too, overhit the volley and dropped back again. With his first serve percentage now below 50, such options were, though, few and far between.

As the Federer error count reached 40 to Djokovic’s 13, the Swiss body language also turned dark, and when two more forehand errors handed Djokovic the vital break for a 4-2 lead, the Federer expression became still more sombre. He managed one last hoorah, holding serve in the eighth with a delightful lob, but minutes later, Djokovic, never losing concentration for a moment, closed out the set and match, 6-3, for one of his most convincing wins over one of his greatest rivals.

Federer afterwards summed it up simply: “I ran into an opponent who was just better today…I had enough chances so it’s no excuse there. I tried and it just didn’t work out.”

And it has not worked out, in Grand Slams at least, for more than two years. Since the Australian Open in 2010, every Major has gone to Rafael Nadal and Djokovic. And in Paris, this Sunday, it will be the same two who fight it out for their place in history. Either Djokovic will win that most prestigious of accolades, a straight run of all four Slams, or Nadal will take a record seven Roland Garros titles.